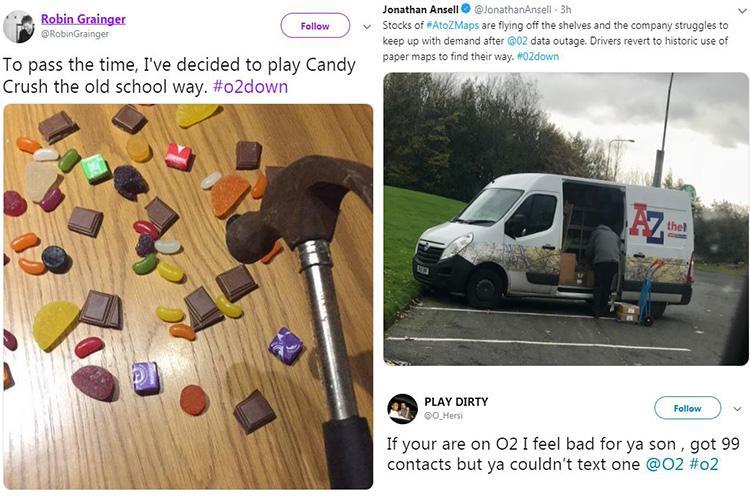 Thousands of customers have been affected by the data outage, including ones who use piggyback providers like GiffGaff, Tesco Mobile and Lycamobile who rely on O2's network.

The network giant is advising customers to connect to the wifi if they need the internet, while they work behind the scenes to get the service back up and running.

O2 is the second largest network provider, with 32million customers, some of whom are now flocking to social media to share memes aimed at the network blunder.

In an age when most of us rely on our phones to avoid social interaction, for entertainment and giving us directions, many data guzzlers are slamming the network for making them feel awkward.

These tweets sum up how inconvenient the outage has been in the most British way possible.

No internet? Might as well go the full hog

You can't even play Candy Crush

99 problems and texting is one

Love at first swipe… or not

What's the first thing you do when technology goes wrong?

We all know that the internet is actually run by cats

The network has been down since around 5:30am this morning as thousands of customers in Manchester, London and Southampton reported outages before 7am.

It has blamed the issue on a third party supplier confirmed to be Sony Ericsson.

The network failure has also affected the electronic timetables for London busses and Boris Bikes which rely on their O2 sim connections.

A spokesperson told The Sun: "The network issue continues to be a top priority for us and we apologise to all our customers impacted by this.

"Earlier today we suspended any planned works or updates across our systems and network.

"This allowed hundreds of people from both our technical teams and our third-party supplier’s teams to focus on fixing the problem, helping us to restore data services as quickly as we can which will also help reduce the high network demand we’re currently seeing for voice calls."

Meanwhile, a spokesperson for Ericsson told The Sun: "We are aware of the issue and are working together with our customers to solve it as soon as possible."
It's not the first time customers have been left frustrate with O2. Thousands of customers were unable to make or receive calls in October due to an outage.

In related news, EE and Vodafone are being investigated by the watchdog over claims that they gave false information about network coverage in rural areas.

Your rights when your network goes down

If you feel the outage caused you significant problems or you waited a long time for the repairs to take place, it's worth complaining and asking for a refund on your bill or compensation.

Telecoms regulator Ofcom says in cases where you have been without service for some time, you may also have the right to cancel your contract penalty free.

To complain, you need to follow your provider's formal complaints procedure. Details should be available on its website or from its customer services.

If your problem is still unresolved after eight weeks you can submit your complaint to an independent Alternative Dispute Resolution (ADR) scheme.

Your provider will tell you which scheme it is a member of.

Andy and Sandra! Revisit the Golden Globe Hosts Through the Years
World News