Home » Lifestyle » Nothing flatters a woman like a deep V: It's the red carpet look 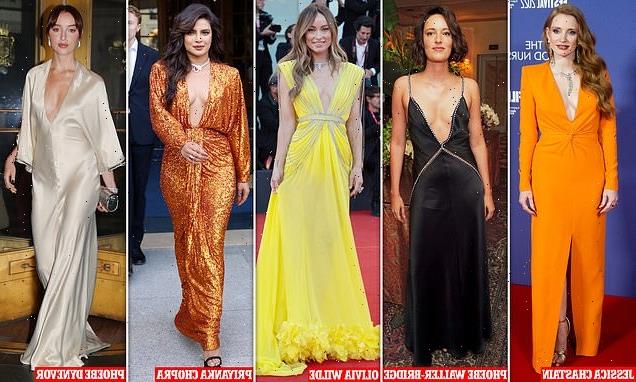 Nothing flatters a woman like a deep V: It's the red carpet look

Nothing flatters a woman’s figure like a deep V: It’s the red carpet look of 2022 and a masterclass in refined glamour. And, says LISA HILTON , from 17th-century courtesans to today’s Hollywood elite, it’s a look that’s never out of fashion

Plunging gown necklines have proved as hardy a perennial on the red carpet as tearful speeches are at the Oscars.

Yet gone are the days when such a look involved trussed-up, two-grapefruits-under-the-chin levels of exposure. We’re now seeing a refreshing take on the decolletage; one that speaks of elegance, rather than artificiality.

In New York this week, Julianne Moore, 61, looked luminous in a Grecian-style white dress slashed to the abdomen, with an impressive expanse of flawless skin on show. Her ‘Deep V’ was offset by the long, white sleeves of her Carolina Herrera gown and the loose folds of the fabric.

Of course, the Deep V doesn’t leave many places to hide. If it projects confidence it’s because it requires it in spades — not to mention great skin, minimal jewellery and perfectly understated hair. But done right, the overall effect is polished, rather than shouty. It is a masterclass in refined glamour.

Though we often think of pre-20th-century fashions as being demure, in fact the look has been around for a number of centuries.

A century later and they had plunged so low that practically the whole breast was exposed. Fashion plates of the 1770s show dresses sitting on the line of the nipple.

The flapper styles of the 1920s also took the plunge, releasing women’s bodies from the stuffy constriction of Edwardian corsetry. 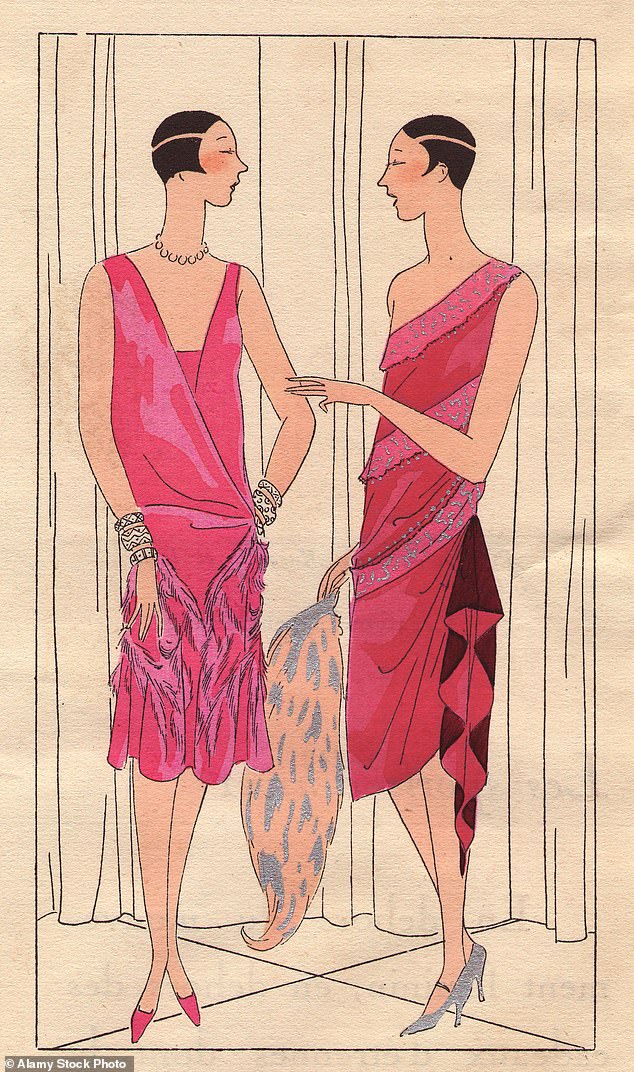 However, it was Halston, the king of disco fashion in the 1970s, who brought the style to its apex with limb-skimming jersey silk styles that left almost nothing to the imagination.

Back to the present day and Fleabag star Phoebe Waller-Bridge can offer a masterclass in the Deep V. Sporting a slashed black satin sheath at the Venice Film Festival, her choice was sensual and sophisticated rather than overtly sexy — and all the better for it.

Evoking Michelle Pfeiffer in 1980s classic Scarface, it was less of a dress than a frame for superlative bone structure.

But though you may think that only a younger woman could pull it off, the Deep V can be flattering on older women.

Julianne has deployed it to supreme effect several times in recent months, also opting for an elegant black velvet dress from Armani Prive in Venice.

Cate Blanchett, 53, is another fan, wowing in a mosaic-trimmed gown, as well as a striking Alexander McQueen suit at last month’s London Film Festival.

A spare line and minimal accessories focused Cate’s look, too. A clean, unadorned silhouette is more assertive and discreetly sexy than distracting frills and jewels, which act as an implicit apology for age.

And younger stars can certainly get it wrong. Though I adored Phoebe Dynevor’s sophisticated Deep V Louis Vuitton dress at the Albie awards in New York, an earlier attempt at the InStyle Awards went horribly wrong.

Her sleek top half was overshadowed by a cloud of frilly petticoat below the waist. Half-siren, half-seven-year-old can never be a happy look. 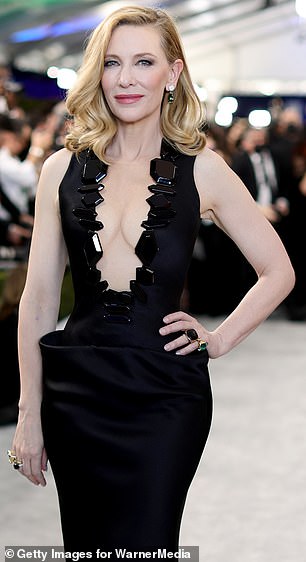 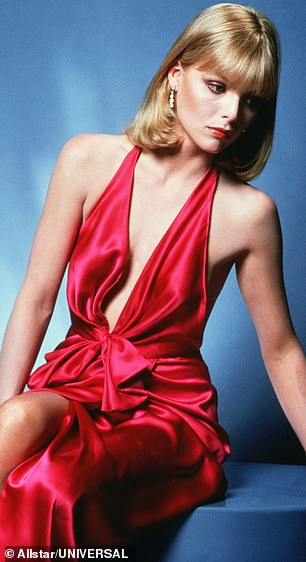 Conventionally, the Deep V-line might be said to flatter the slighter figure, but as Cate and Julianne proved, it can work beautifully for fuller-breasted women if the cut is structured.

While fluid fabric and tiny straps risk things falling out of place, a boned bodice will offer support and keep its shape as you move.

The V needs to be narrower, so the exposed flesh is a hint rather than a public announcement, but the style can give great definition to curvier figures.

That said, as with many seemingly effortless looks, the Deep V demands a bit of work behind the scenes.

Stick-on bra cups, or a deft hand with t*t tape, is de rigueur for all but the most boyish of bosoms. Julianne accessorised hers with ropes of gold and twisted diamonds respectively, but unless you have Chopard on speed-dial, a bare neck is absolutely key to the Deep V.

This will keep it fabulous rather than fussy, as even the simplest necklace risks breaking up the line. While it might be tempting to add a flash of sparkle, anything beyond minimal earrings will detract from this style.

Glowing skin — perhaps with some subtle body contouring and a gleam of highlighter on the clavicle — is the only background the Deep V needs.

Done right, it can certainly be a poised, grown-up and alluring style, but is the Deep V too demanding to be realistic?

If you have worries about wrinkles or sun spots, or boast anything over a C-cup, then you probably won’t be comfortable sporting a Deep V.

As a woman in my 40s, I’ve not felt at ease with showing my cleavage for years. Yet these gowns could change my mind.

Looking at Julianne at ease in her dress, the confidence she projects is inspiring. Her take was not only understated but playful, pushing the boundaries of how successful, serious women are ‘meant’ to dress.

Perhaps a supple, graceful gown — one that shows some front yet doesn’t cling to every curve, and so conceals as much as it reveals — needn’t be a scary choice after all.

So what CAN you wear underneath?

It’s the bra that’s not a bra — and it’s come a long way since the days when it was basically double-sided sticky tape that you placed between your dress and your skin. Colloquially known as ‘t*t tape’, you can get all manner of adhesive articles including this single-use stick-on bra called The Game Changer (£44 for five single-use pairs, lovenood.co.uk).

Available in four different sizes and colours, it’s made from sweat-proof, waterproof, breathable hemp, and claims to support boobs up to a G cup. 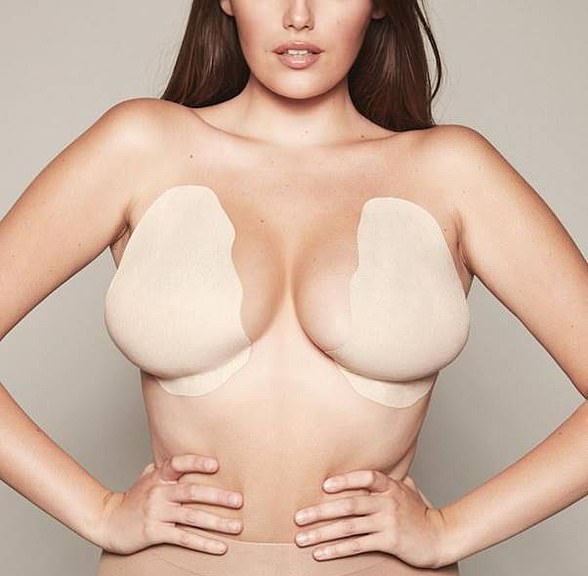 It’s still possible to get a cleavage without a bra, courtesy of products such as these Sculpting Strips (£12.99, perkypear.com) in beige, brown and black.

The idea is that once you’ve used straight tape (see below) or sticky cups (see above) to lift and separate, you can use these curved strips to encourage your assets to convene in the middle of your chest.

Using the correct-sided strip (the bulge should be on the outside of the boob), apply the bottom of the strip to the outer underside and smooth the tape upwards, around the outside and then inwards, fixing it at the top of the breast, slightly towards the centre. 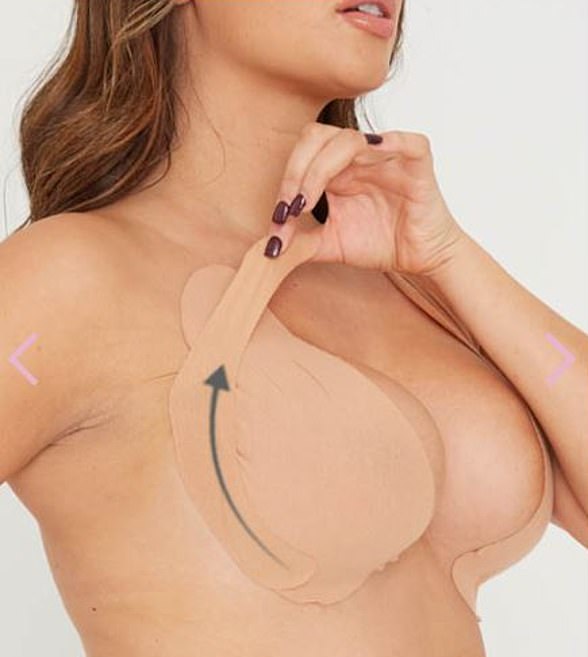 If you’re youthful or small-chested enough not to need your bosom hoiked, but still want a perfectly smooth line, look for a pair of pasties, also known as nipple covers, nipple petals or nipple flowers. These are essentially shaped plasters that cover the nipple to ensure nothing pokes out.

But more sophisticated versions exist. Nippies by B-Six (£24.50), in Selfridges, come in three shades and two sizes. They’re made of silicone and can be washed and re-used 20-30 times.

Apply in any way that works for you. The brand says it ‘highly encourages’ the use of nipple covers with its tape to avoid a painful removal.

Fancy that! Estate agent Amanda is one of The Traitors' top fibbers
World News