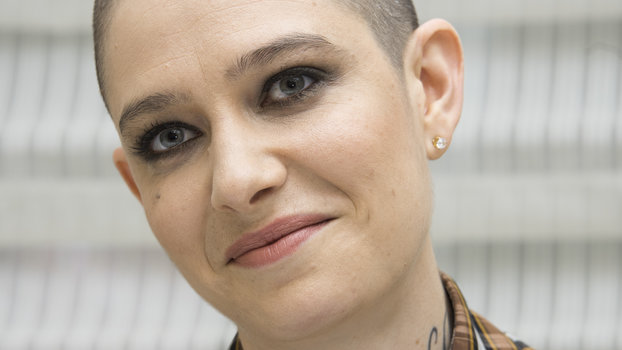 They’ve spent time in prison on Netflix’s Orange Is the New Black and continue to get down to business on Showtime’s financial drama Billions. Now, non-binary actor Asia Kate Dillon is up against Keanu Reeves’s title character in John Wick 3, but not to worry — despite the movie trailers, they don’t actually play the bad person. At least not exactly.

“I play a multidimensional character called the Adjudicator,” they exclusively explain to InStyle over the phone, talking about their big screen role. “They’re a representative of the High Table, which is a shadowy, international assassins guild. My character is there to enforce the binding rules of the High Table. So, they didn't make the rules, they're just there to let people know that if you break them, there are going to be consequences.”

Not only did Dillon get to work alongside the likes of Hollywood legend Reeves — who, they reveal, was “gracious, humble, kind, and super prepared” on set — they also got to wear a variety of vintage suits for the film, which helped to get them into their means-business character.

“It was a lot of fun because [the Adjudicator] wears all of this vintage Thierry Mugler, which are very high-femme, European, and structural, but implement a lot of sumptuous fabrics like silks and velvets as well,” they tell us. “Taylor on Billions dresses very conservatively and is just one version of what non-binary expression could look like. It was really fun to have the Adjudicator as another expression of a non-binary identity, wearing all of this high-femme fashion.”

While Dillon is clearly a fan of their character’s wardrobe (and “would wear it every day” if given the chance), their go-to style is somewhat different from what we see on screen.

"If I'm comfortable in it, then I'm going to wear it," they say, adding that they do the majority of their shopping secondhand. "I need to be able to walk, run, and sit. I just want to be comfortable above all else."

Our conversation about fashion soon turns to one about summer, and Dillon admits that as a non-binary person, they’ve encountered difficulties when dressing for the season.

“When I was younger, certainly summer was a very hard season, particularly because of bathing suits,” they tell us. “When I was a child, I never wore a top, just bathing suit bottoms, because I was a young person and that was seen as okay. But, as we get older, we have these gender boxes that we're supposed to fit into when it comes to swimsuits, so I was always really uncomfortable. I never wanted to wear a bikini or a one-piece, I wanted to be in shorts without a top, which wasn't acceptable at, like, a local pool.”

Thankfully, Dillon found a way to work around these restrictions.

“I grew up in Ithaca, New York, where there are tons of natural springs and waterholes. I tried to swim in the local, more natural places, where I could either not have a shirt on or [not wear] a swimsuit.”

These days, the actor is thankful for beaches around the New York City area, where they’re able to present the way they do and wear what they’re comfortable wearing. But, if they do end up at a public pool? “I'm wearing swim shorts with, basically, a sports bra. Something that's not a bikini style.”

Before hanging up, Dillon also took a moment to weigh in on gender neutral clothing as a trend — a term they say doesn’t even make sense.

“All clothing is gender neutral,” they explain. “Clothing doesn't actually have a gender, it’s just that we have imbued stereotypical masculine and feminine qualities onto clothing. It is society that said a dress is feminine or that pants are masculine, right? It’s all fabric sewn together to fit someone's body."

John Wick 3 is in theaters now.