NGV Triennial gets under the skin with contemporary African visions

As Florence Kisombe moves through Nairobi's crowded Kibera neighbourhood, passersby watch her, grinning. Clearly, they are curious, but it's hard to interpret those grins. The elegantly attired Kisombe doesn't seem to care. Captured in an image titled Spectacle by Sarah Waiswa, Kisombe's albinism is set gracefully against the unpolished streets. 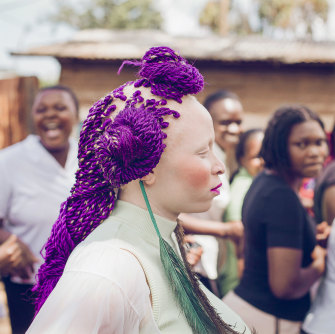 Questions about this image clamour for attention. What does it mean to be a black woman when your skin has no colouring? Are we being invited to stare at Kisombe like the onlookers do? And what happens when your image becomes a commodity, tagged as art, and displayed on some stranger's wall?

Waiswa's photo, part of her 2016 series Stranger in a Familiar Land, is included in the National Gallery of Victoria's Triennial, a survey of contemporary art, design and architecture opening on December 19. Sadly, the pandemic means that Waiswa and other international artists can't attend but in the lead-up to the opening, she joins a video meeting from Nairobi with two other featured artists to discuss their work: Phumzile Khanyile in Johannesburg and Atong Atem in Melbourne. 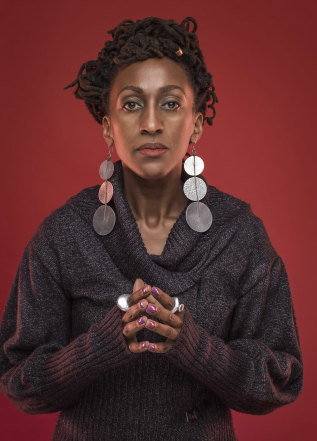 Sarah Waiswa: ''We are turning the camera on ourselves, we are photographing each other. But where does the work end up?”Credit:Osborne Macharia

"You notice nobody is saying anything about 2021?" Waiswa responds. "I haven't heard anybody say 'I'm going to take on 2021!'" The three women laugh.

While they may be geographically distant from each other, as the three artists converse, it becomes plain that none has neat, parcelled-up answers to the complex issues presented by their photography. They scrutinise it all.

Their backgrounds give hints about their outlooks. Waiswa was born in Uganda under the dictatorship of Idi Amin and was a baby when her family moved to Kenya, while Khanyile was born in Soweto township in Johannesburg. Atem was born in Addis Ababa, Ethiopia, to South Sudanese parents, moving with them to Australia when she was a child. Each artist's heritage, then, is as diverse as their photography, even though this work is interconnected in the way it raises thorny issues about "blackness", gender, bodies and the gaze of viewers. That's us.

Skin colour, of course, seems central to considering Waiswa's images of Kisombe, who told her about living with albinism before they did the shoot. Waiswa had heard stories of violence against people with albinism and had made contact with the Albinism Society of Kenya to raise awareness. Kisombe's strength and solid sense of self-expression saturate the photos. Because the work was shot in a public space, the women knew it would draw attention. 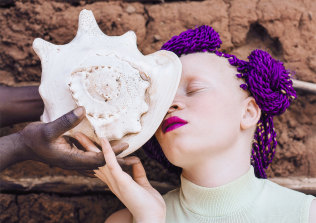 "I think the images spoke to the power of what we were trying to communicate, which was this person existing in a space where she was constantly being looked at as a spectacle," Waiswa says.

All three artists are interested in this tension between wanting to make art to be looked at, investing it with personal stories or interests, but then letting it go out into the world where it will be interpreted – or misinterpreted – as it begins a life of its own.

Khanyile experienced this with her 2016 photo series Plastic crowns, which has been described as an exploration of shame, and an unpacking of the expectations Khanyile inherited from her grandmother about what it means to be a woman in South Africa. There she is in the humid photos, exposed and slightly blurry, embodying layers of meaning about gender, sexuality and social convention.

As Khanyile says, photography – hailed in its early days as capturing "the truth" – is such a tricky medium: she might set out to relate a story with a varied and layered context, but inevitably it ends up with a much narrower point of view as everything gets concentrated into a single image or, in this case, a limited series of pictures. "Even with the personal stories such as Plastic crowns I did not have the capacity to hold everyone's truths," she says. "It always boils down to your personal perspective – and when that happens, there are a lot of truths that are left out in the process." 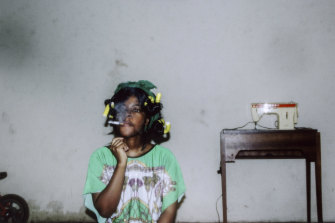 Several years down the line from making Plastic crowns, Khanyile sees different elements when she looks at the images – a girl who was trapped, trying to figure things out and take herself back. "With Plastic crowns, it was an accumulation of past traumas throughout the years living with my grandmother. So when I did the body of work, I thought that it would be the end … about moving on to the next thing. But then it became another three, four years of trying to heal from creating Plastic crowns."

In a similar way, Atem sees her own changing responses to the multiple layers in her 2015 series of studio portraits. The works portray Melbourne friends who, like her, are first or second-generation African immigrants experiencing mixed cultural identities. They sprang partly from a desire to comment on how the art history she was "taught to celebrate" at college, with its focus on Western art, was exclusionary and uninteresting to her. Here, she makes work that has a confident poise about it, with a brilliant intensity of cultural influences beyond the Euro-centric. 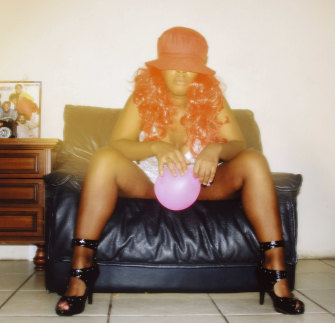 "I am happy to look at paintings by the Old Masters and commend the skill that it takes to capture the light on someone's shoulder – I recognise the value of that – but I think that as a student of art and a person in the world, not having access to other art histories is such a missed opportunity."

With the studio portraits, she paid homage to 1960s African photographers who took photos "of ourselves, for ourselves" as opposed to what Atem describes as "colonial and dehumanising and horrible" 19th century ethnographic images taken of African people.

As time has passed, she has continued to interrogate her own work.

"A lot of the work I have made since that studio series is interrogating what it means to have photographed my friends in this allegedly collaborative way and then put them on walls around the world for 'art people' to look at in their homes," she says. "My negotiation these days is more with myself and how I am relating to the people I am photographing and what lies I have told myself about my position – how I may or may not have exaggerated my importance in that moment, or maybe I have downplayed it, or maybe I am projecting." 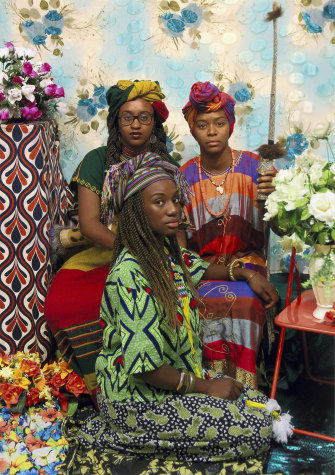 At first, she says, it seems easy to have conversations about consent and ethics. "But when it comes to photography and editioning and the gallery space and conversations about politics and bodies and all of this stuff: it feels huge." Perhaps that's why she does more self-portraits these days.

As for the images going out into the public realm to be "owned", Waiswa says most of the people who buy her photos are from Europe or America. "Of course, as an artist when you create work you want people to engage with it," she says. "We are turning the camera on ourselves, we are photographing each other. But where does the work end up?"

Atem, too, wonders about the afterlife of her images. "What happens if my friends end up being 'purchased' by someone who is anti-black, or just mean, or terrible, what does it mean for that person to feel … a sense of ownership over these people because they own a depiction of them?"

Khanyile agrees, noting that she finds the term "blackness" that is used so often in critiques and art magazines as somewhat fraught. "What does it mean? 'Blackness': there is a whole culture of human beings behind that." While she says artists such as herself, Atem and Waiswa may be creating new ways of seeing "blackness or black people or African people, whatever you want to call them", the work still ends up with images of black women on white walls to be displayed and to be seen.

"Is it different because I am taking the image and I am black: does that necessarily mean agency? I question it a lot and I still don't know the answer or where it is going to take me. Are we not just replicating what has been done in the past; and what is the difference between then and now? I don't know." 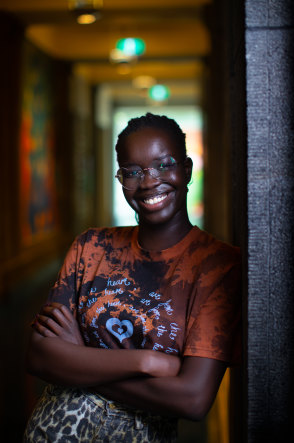 Atong Atem: ''I am really curious about this over-saturation of black people in photographic and visual mediums in art and fashion.''Credit:Simon Schluter

She is pretty blunt about how messy all this is, describing the art of photography as "a conversation and a debate, and a negotiation and a dictatorship" all mixed up together. "I also wonder is it ever going to get to a point where it stops being 'amazing' to be an African photographer? It's always this subcategory, where you're black or an African photographer. When do we become 'artists' that are creating or narrating our stories, or whatever we are doing with our works?"

Atem talks about this in the context of attending exhibition openings (where she is sometimes "there late because I don't like to do all that champagne and conversation"). But at such events she hears certain language. "Even people who are super smart and know all the language and are really invested in it still refer to black people in an artistic context as 'black bodies', for example. What does that mean? How do I deal with that when those 'black bodies' are human people I know and have a relationship to? They should be respected and I am really curious about this over-saturation of black people in photographic and visual mediums in art and fashion. 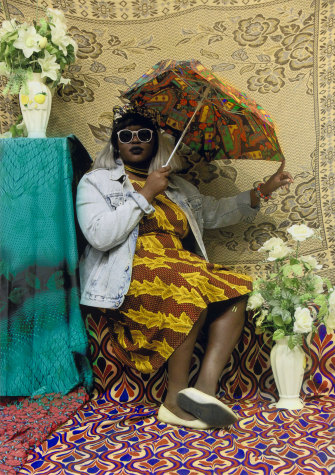 For Waiswa, Khanyile and Atem, there is no doubt the beautiful, intriguing images they make are central to the exploration of the much bigger issues they talk about – yet it takes a lot of energy, integrity and commitment to keep on pushing through.

"It becomes very challenging when we just want to make art about the things we want to make art about," Atem says. "We can't remove our individuality and our existence, while also primarily representing this huge global, broader thing that is blackness and black women. My camera is already heavy enough."

Kendall Jenner Masks Up for Night Out with Friends in NYC