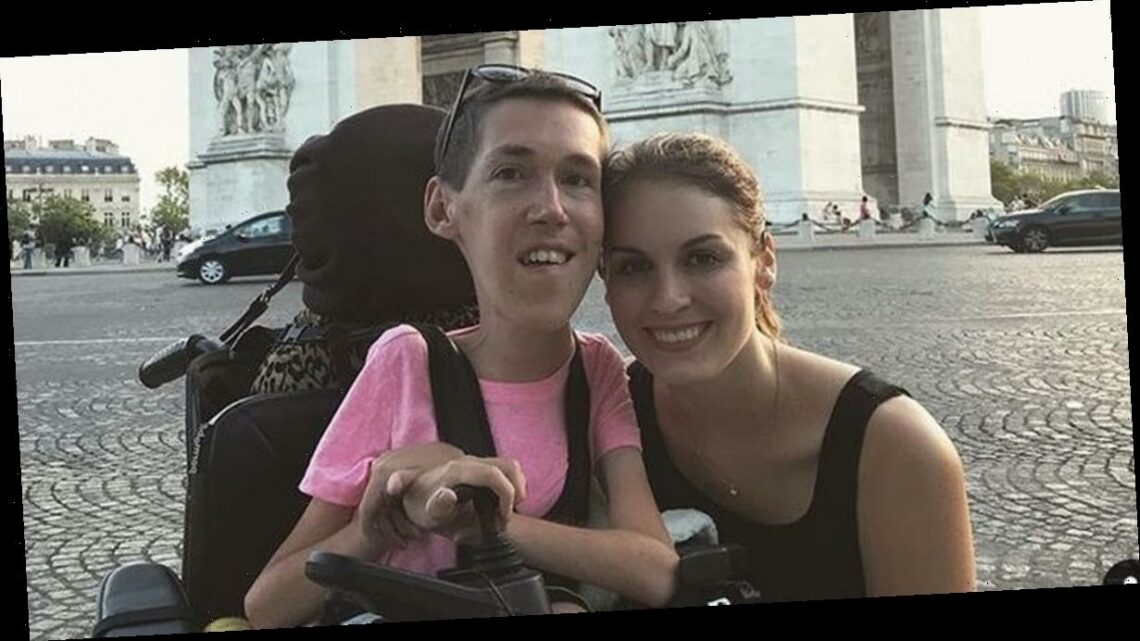 A newlywed bride was left heartbroken as online haters accused her of faking her true feelings towards her husband.

Hannah Aylward married Shane Burcaw in a back garden ceremony on September 4.

The couple, who have over 700,000 followers on their Youtube channel Squirmy and Grubs, announced their nuptials on Instagram.

But, Hannah claims that people don’t believe that the couple’s relationship is genuine because of Shane’s spinal muscular atrophy.

The genetic condition affects the nerves controlling muscle movement – so muscles become weak and waste away.

Have you had a lockdown wedding? Tell us about it in the comments section…

Among the many happy comments congratulating the newlyweds some were of a cruel nature.

Comments claimed that the wedding was “some kind of joke” or “photoshopped” claims news.com.au.

One read: “But for real thought … does she also have another partner for having sex with?”

“I’m saying this without any kind of apologies – I’m pretty sure that woman married him because of money and not for love,” read another.

One person wrote: “Some of us women will do anything and everything for money, even if it means putting up a front, pretending just to get what they want.

Despite having posted their relationship on YouTube for years, people still didn’t believe that she could love her husband.

She said: “A few years ago, reading words like these was painful.

“For a while, I held onto the idea that once Shane and I were married, all the people doubting our relationship would realise it was real.”

Hannah added that she was “not that naive” anymore.

She commented: “Shane and I continue to make content and share our story with the hopes of showing as many people as we can that disabled people are worthy partners.

The couple’s fans flooded in with messages of support.

One claimed that they were “beyond sorry that you have to deal with this kind of disgusting commentary”.

Another added: “You two are the definition of love and if these people don’t see that than they don’t know what love is.”

Another said: “I don’t know what possesses people to spew such hate.

“Congratulations on getting married, I’m so happy for you both.”

The pair were also bombarded with messages accusing them of not being able to get legally married because of Shane’s disability.

The couple confirmed on YouTube that they have had a legally binding ceremony, despite the fact that it could affect Shane’s medical benefits in the future.

Shane said his inbox was “filled everyday with a dozen messages from mean people telling us that Hannah is only after my money or that she could never love anyone as disabled as me”.

The young bloke said that he and Hannah had a “satisfying intimate life” and that their relationship was “not special”.

He added: “As our YouTube channel has grown, hundreds, if not thousands of couples in similar situations have reached out to us.

“It turns out, people with disabilities are in fact still human, with emotional wants and needs like everyone else!”