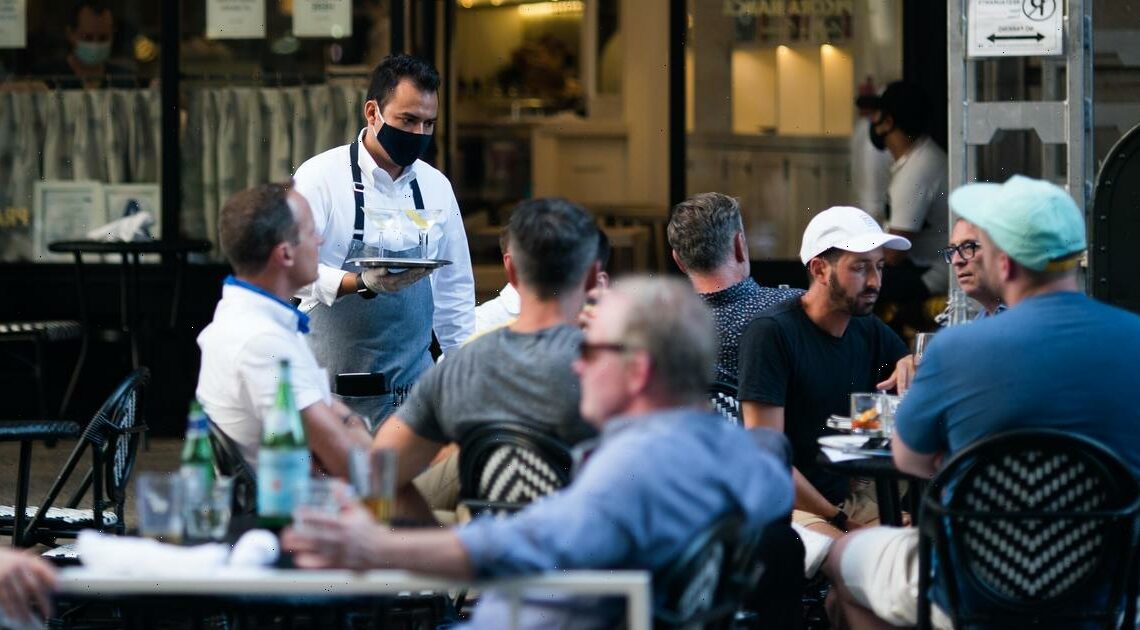 Vaccinated New Yorkers can ditch their masks, even indoors, the New York City marathon is coming back and Radio City Music Hall will reopen to vaccinated audiences, Governor Andrew Cuomo said Monday in a flurry of announcements intended to accelerate the state’s reopening.

“Let’s get back to life,” Cuomo said, speaking from Radio City Music Hall’s grand auditorium. “If you are vaccinated, you are safe. No masks. No social distancing.”

After a delay of several days, Cuomo said the state is adopting new guidance on masks that the Centers for Disease Control and Prevention released last week.

Unvaccinated and immunocompromised people must continue to wear a mask and maintain at least 6 feet of social distancing, but people who have waited two weeks after completing their inoculation series no longer have to do either, starting Wednesday.

Masks will still be required for everyone in certain settings, like schools and nursing homes.

Cuomo said it’s up to businesses and venues to decide how to check someone’s vaccination status. New Yorkers can use the New York State Excelsior Pass smartphone app to prove their vaccination status, and Cuomo said he expects customers will ask business owners whether they’ve checked whether other patrons are vaccinated.

“They can check, they can ask at the door, they can ask when you are seated at the table, or not,” Cuomo said. “There is no mandatory compliance that the state is imposing on the private vendors.”

Cuomo made the announcement hours after overnight service on New York City’s subways resumed for the first time in more than a year as the city continued its emergence from the coronavirus pandemic.

New cases of the virus have been plummeting statewide in recent weeks: New York reported about 12,500 people tested positive over the last seven days, down 78% from nearly 57,500 in the last week in March.

The New York City Marathon, the governor said, will return on November 7. For now, capacity is capped at 33,000 runners, but Cuomo said that restriction could change in coming months if things continue to improve.

The governor had previously announced that many restrictions on businesses will be loosened Wednesday, including rules that limited occupancy.

Cuomo said that starting Wednesday, venues can open up to 100% capacity, as long as they only allow vaccinated people inside.

Radio City Music Hall will reopen in June at full capacity — but only for vaccinated people — with a red carpet event for the TriBeCa Film Festival.

The city’s two professional basketball teams, the Knicks and the Nets, will also be allowed to expand attendance capacity for upcoming playoff games, with a majority of seats set aside for people who have gotten vaccines.

“If you’re unvaccinated, that’s your choice,” Cuomo said. “But you can’t go into Radio City Music Hall with vaccinated people.”

New York has fully vaccinated about 43% of its 20 million residents, with rates as high as 66% in Hamilton County in central New York and as low as 27.5% in Allegany County in western New York and 30.5% in the Bronx.

“We’re really happy to be bringing 24-7 service back,” Foye said on WINS radio. “It’s important to the economy of New York, restaurants, bars, nightclubs etc., getting patrons and employees to and from, and it’s also important psychologically.”

The system was shut down between 1 a.m. and 5 a.m. starting April 30, 2020 so trains and stations could be disinfected. The overnight closure was scaled back to 2 a.m. to 4 a.m. in February.

Mayor Bill de Blasio said Monday that the city would be adding 250 more police officers to the subway system to battle a spike in crime, including several slashings last week.

Foye said the MTA would send 100 more of its own officers and 100 more private security contractors into the system to supplement the New York Police Department presence.