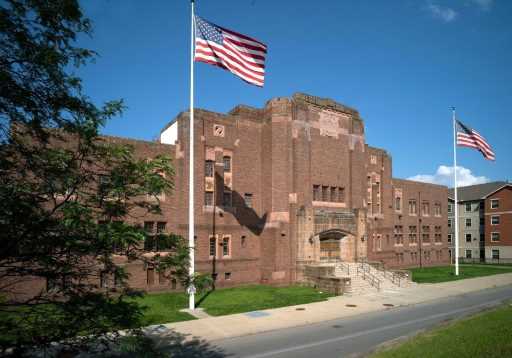 Horse-drawn carriages were back on the streets of Troy, N.Y., in August, alongside equipment trucks, honey wagons and camera cranes. HBO’s “The Gilded Age” had returned to shoot scenes for the second season of the series, which explores the lives of monied families and the people who serve them in 1880s New York. The previous year, the production had covered the streets of Troy’s Monument Square with truckloads of dirt to turn it into a period-correct downtown Manhattan shopping district, and also utilized other well-preserved 19th century structures in the town (population: 51,400), 152 miles north of Manhattan, including the Rensselaer County Court House, the Savings Bank Music Hall and the Troy Public Library, along with its Washington Park neighborhood and the Oakwood Cemetery.

“The buildings [in Monument Park] were built between the 1820s and 1880s, and many of them are perfectly restored,” says the show’s location manager Lauri Pitkus. “You can walk down whole blocks and feel like you’re in the West Village or near Gramercy Park or possibly on the Upper East Side [in the late 19th century].” While Manhattan still has a substantial amount of 19th century architecture, Pitkus says, “there isn’t a block of New York City where we could really shoot. The city is covered in scaffolding.”

Troy is just one of the locales in the state outside of New York City’s five boroughs experiencing a dramatic increase in film and TV production. And an abundance of well-preserved 19th century architecture is not the only thing drawing them there.

With the art department’s addition of fake street signs and false subway entrances, the Hulu feature “The Ultimate Playlist of Noise” (2021) was able have Syracuse double for contemporary Manhattan and Brooklyn.

“That was a really special one for us, because that’s what we always pitch — that you can shoot the city and the big metros here in the right spot, and they did,” says Eric Vinal, VP of film, TV & entertainment for Visit Syracuse.

Producers of the upcoming HBO miniseries “The White House Plumbers,” starring Woody Harrelson and Justin Theroux, went even farther, re-creating the 1961 Bay of Pigs invasion using Kingston Point Beach on the Hudson River in Ulster County standing in for the southwestern coast of Cuba.

“The topography is very different, depending on the county,” says Laurent Rejto, director of the Hudson Valley Film Commission. “For example, Orange County is more farmland, then you if you go up north to Ulster County there are more hills, streams and forests. Green County is all mountains and Dutchess County has a lot of horse farms and all those beautiful mansions from the Gilded Age. The east side of the Hudson has always been wealthier because it had the railroad, and on the western side there were more workers for all the quarries and brickyards that used to ship [goods] down to New York City.”

Jim Mickle was able to shoot the bulk of his East Texas-set post-apocalyptic vampire road movie “Stake Land” (2010) in the area surrounding his home in Margaretville, N.Y.

“I was so shocked when we went to scout that part of Texas — it actually looks like upstate New York with the pine trees and that kind of wet feel,” says Mickle, co-creator of the current Netlix series “Sweet Tooth.”

When “Stake Land” shot in 2009, the area was hardly a production hot spot. Things began to change in 2015 when New York State amended its already popular 30% tax credit (reduced to 25% in 2020), adding an additional 10% on below-the-line labor costs for projects with budgets of $500,000 or more that shot in certain areas outside of New York City. The following year, the previously excluded counties of the Hudson Valley were also made eligible for the extra 10%, and the production boom commenced.

In the years since, the region has hosted a long string of shows from HBO, including “I Know This Much Is True“ and “The Sex Lives of College Girls,” along with projects from Showtime (“Billions,” “The First Lady,” “Three Women”), Apple TV+ (“Severance,” “Invasion”), Netflix (“Manifest,” “Things Heard and Seen”), Hallmark (“A Holiday Spectacular,” “One December Night,” “Redemption in Cherry Springs”) and Amazon (“Master”).

Two of the most significant upstate New York productions are “A Quiet Place” (2018) and “A Quiet Place II” (2020), which attract fans seeking out shooting spots like the Springtown Bridge in New Palz, where John Krasinki’s character races to save his son from invisible aliens in the first film.

Troy has also been attracting tourists eager to see locations featured in “The Gilded Age,” which has also shot in Albany and Cohoes, and other recent productions including Edward Norton’s ’50s-set feature “Motherless Brooklyn” (2019).

“When people get here, they’re just like so surprised by the compact walkability,” says Denee Zeigler, senior economic development tech for the city of Troy. “You can look at all the architecture and you’re almost walking through all these different time periods.”

As production levels continue to rise in the area, so has the number of qualified production facilities, which includes Umbra Stages in Newburgh (Peacock’s “Poker Face,” Darren Aronofsky’s “The Whale”), Upriver Studios in Saugerties (HBO’s “Pretty Little Liars: Original Sin”) and Amory Studios in Schenectady.

Armory Studios occupies the former site of the Schenectady Armory, which was home to two units of the New York Army National Guard from its opening in 1936 through 2008. Jeff and Ray Legere, owners of Legere Properties and the Legere Group, purchased the site at auction in July 2012 for $260,000 and spent the next decade updating the four-acre site, which boasts a 30,000-sq.-ft. main building with 50-foot ceilings, adding 250 tons of air conditioning and upgrading its power from 600 amps to 4000 amps.

The second season of Amazon’s “Modern Love” shot at Amory Studios in fall 2020, at the height of the pandemic, when the ability to be self-contained and isolate from outsiders was of utmost importance.

“They took over the entire facility, because they wanted to protect their production staff,” says Legere. “And, more importantly, the city and the county got together and took care of all of their offsite needs.”

An even more audacious transformation was pulled off by filmmaker Jeremy Garelick (“The Wedding Ringer”) and his business partner Will Phelps, who bought the former A.V. Zogg Middle School in Liverpool, N.Y. (population: 2,242), for $1 million in 2017 and turned the 89-year-old building into a production facility dubbed American High, dedicated to making teen comedies. Armed with $50 million in financing and a deal with Hulu, they’ve made more than a dozen movies, including “Big Time Adolescence” (2019), starring Pete Davidson and Jon Cryer, “Plan B” (2021) and “I Love My Dad” (2022).

American High offers internships for college students and training programs for locals, and its productions draw workers from elsewhere in the state to the village, a suburb of Syracuse, giving people a reason to believe that the good times might be here to stay for the local film and TV community.

“We’ve got a ton of short-term furnished rentals now that people are using and our hotels are full,” says Visit Syracuse’s Vinal.  “It’s been so cool to see this thing transform.”?