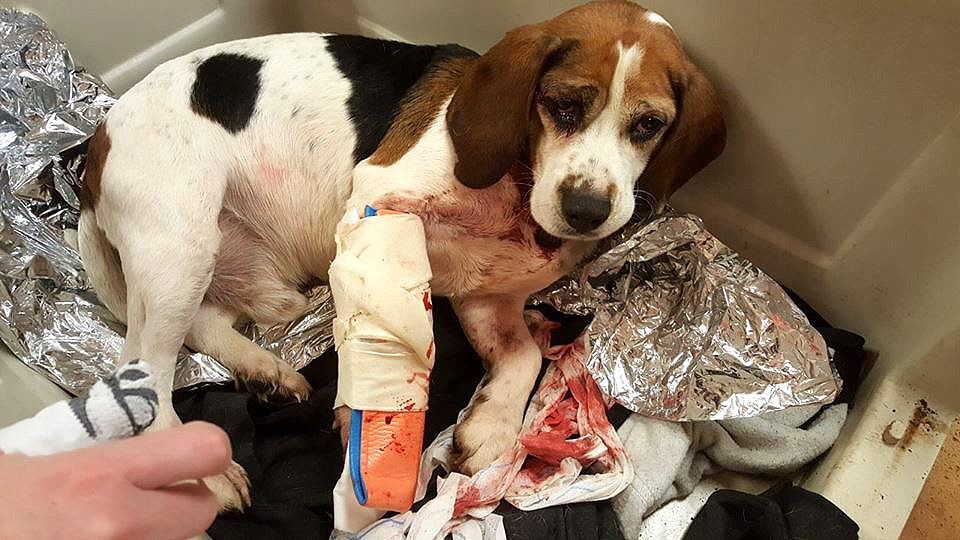 According to a press release from the department’s Troop C, two canines, likely beagle mixes, were reportedly thrown out of the window of a moving car, perhaps an “older Dodge Durango,” and onto a section of Interstate 81 in Cortland County, New York, last Wednesday.

This cruel act was witness by a Good Samaritan in a tractor-trailer, who told police that he immediately stopped his vehicle to assist the animals. New York State Police officers patrolling the area found the truck driver in the left lane of the interstate, carrying one of the dogs as the other canine followed behind him. The dog the truck driver was carrying was badly injured.

“Troopers immediately rendered assistance to the injured dog. A New York State Police K9 handler bandaged the injured dog to stop bleeding and splinted its leg while other troopers kept the dog warm in a warming blanket and in the truck driver’s sweatshirt. The smaller dog was fed dog biscuits and ate half a box,” reads the release about the incident.

After providing initial care for the canines, the New York State Police contacted the Broome County Humane Society. The shelter came and picked up the dogs, whom they have named Adam and Trooper.

Adam’s check-up showed no serious injuries, but Trooper didn’t fare as well. According to Broome County Humane Society’s Facebook page, veterinarians found that the dog had fractured his front legs, broken ribs and had lung contusions.

To make sure Trooper received the best care, the shelter transferred the dog to Colonial Veterinary Hospital in Ithaca, where they have an orthopedic specialist on staff, and started collecting donations for the dog’s mounting medical bills.

After evaluating Trooper’s fractures, the animal hospital determined one of the dog’s front legs needed to be amputated. Trooper, a proven fighter, got through the surgery and is now focused on recovery and learning to walk on three legs.

As of Saturday, Trooper continues to be a trooper. He is healing well and improving his three-legged walk. He has a long way to go before he is back at full health, but the shelter is optimistic that Trooper has the spirit to carry himself through, and the support from the community that he needs.

“We have received enough donations to cover our expenses thus far which is fantastic! We will continue to provide for their needs until they find their forever homes,” Broome County Humane Society staff wrote on Facebook on how the community has helped Trooper and Adam, adding that any funds left over after Trooper’s care is covered will be used to help the hundreds of other animals the shelter cares for each year.

This senseless act of cruelty has left the shelter and many animal lovers “distraught,” but the response to this act of abuse has touched Broome County Humane Society.

“I think about a whole community coming together feeling their pain and seeking for justice. I just want to say that there are really bad people out there but also there are many, many good people here, too. And remember the good when united will always overcome the evil. From the bottom of our (broken) hearts we want to thank you all for everything you do!” a representative from the shelter wrote on Facebook.

The New York State Police hope this kind of compassion and dedication will help them find the individual responsible for dumping these two dogs.

Adam and Trooper were thrown from a vehicle traveling south on I-81 between the Marathon and Whitney Point exits on Wednesday at approximately 9:30 a.m. Anyone with information about this incident is asked to call SP Homer at (607) 749-1614.