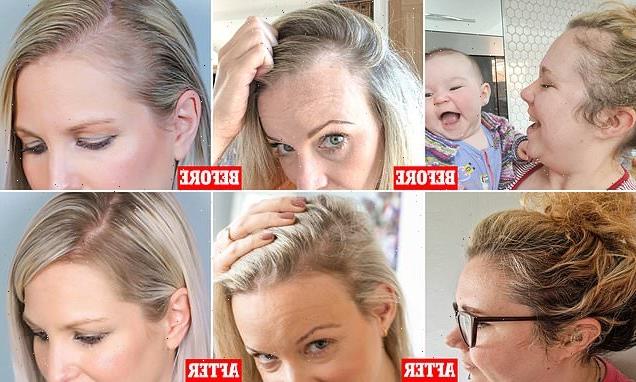 Five new mothers have revealed how they lost patches of hair after giving birth – but managed to reverse the trend and regrow their locks.

Some 24 per cent of British women suffer from postpartum hair loss, according to polling, and the NHS says it is common for women to lose more hair than usual up to three months after they’ve given birth.

It is normal for people to lose small amounts of hair as it replenishes itself, with people shedding an average of between 50 and 100 hairs per day.

However, if people start to lose entire patches of hair or large amounts of it it can be more distressing – and potentially a sign of something serious. 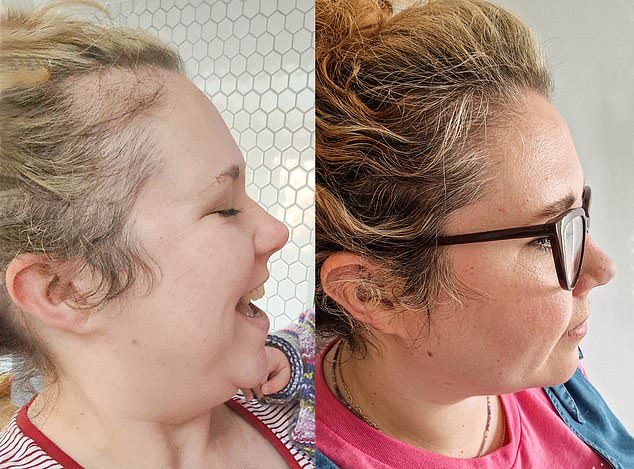 Ruth Elphick suffered from postpartum hair loss, which left her ‘practically bald’, with hair missing from her temple to her ear on one side of her head.

She said: ‘I looked at pictures and remember thinking I was taking lots of selfies with Ivy and I noticed my hair loss and it was quite shocking. I thought, ‘Oh my God, I am so bald!’.’

At first, Ruth says she ‘thought she had got away with’ hair loss, as it began later than it did after her first born. However, she said: ‘When it did start, it was so much worse than the first time round.

Even though she was expecting some level of hair loss, Ruth was devastated by the scale of the problem the second time around and months later there was no sign of re-growth.

The whole of the side of her head as far as her ear was practically bald and so in desperation, she turned to a nutritionist who recommended she try a natural vegan supplement called Hair Gain, which has a key ingredient Anagain, derived from pea shoot proteins which makers say boost hair growth.

Ruth said: ‘After a couple of months of taking the capsules, I could see a lot more regrowth and coverage – lots of new hairs were sprouting around my hairline and temples.

‘My hairdresser also said that the regrowth was happening all over my head and it was growing back quicker and thicker too. After three months I felt so much better about how I looked.’

She also noted that as well as helping boost hair growth, the supplement ‘contributed to [her] overall feeling of wellbeing’. 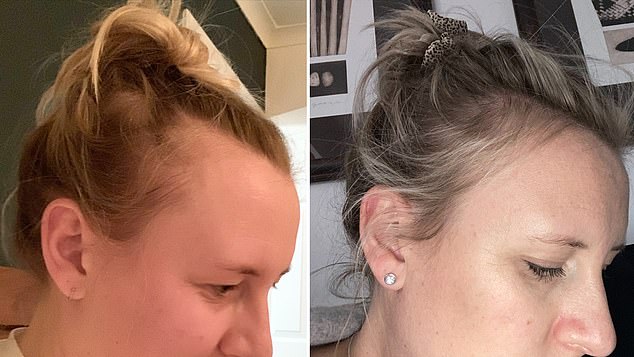 Rachel Baines, 40, (pictured before and after using the product), says she found losing large chunks of hair ‘very upsetting’

Meanwhile, 40-year-old Rachel Baines, from West Wickham, Kent, also experienced devastating hair loss after the birth of her daughter Matilda, leaving her with thinning and bald patches at the front and at the temple.

She said: ‘I started losing my hair six months after Matilda was born…There were clumps of hair in the shower! I hated it, it was very upsetting.’

Despite finding ways to conceal the bald spots, Rachel says the hair loss affected her confidence.

She tried to wear her hair down as much as possible, as wearing it up made the hair loss at the front extremely noticeable.

Rachel tried a range of remedies including topical treatment and various volumising shampoos but found they made, ‘no difference whatsoever’.

After the birth of her second child Wilfred, who has just turned one, Rachel was determined to find something that would actually make a difference for her postpartum hair loss, and found Hair Gain.

Rachel said: ‘I took the Hair Gain gummies and within weeks it had stopped my hair loss. Within a month the hair growth was amazing and I could see such a big difference and it’s made me feel much more confident…I just feel like I’ve got my mojo back.’ 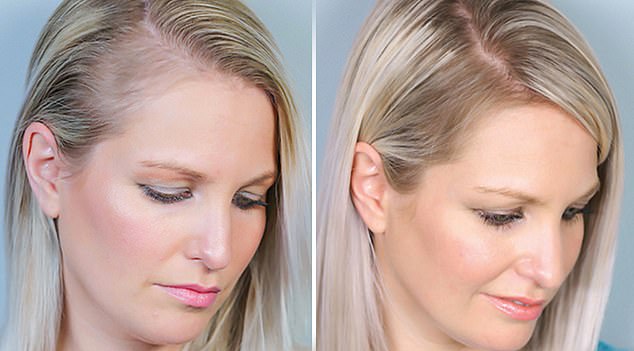 Restaurant concierge Kimberley Coke, from Hertfordshire, noticed her hairline becoming noticeably thinner after having her son Jonah, with large amounts of hair falling out when she brushed it after showering.

She said: ‘Image is important in my job. I am booking the very best restaurants in the world for elite clients. They are the kind of tables where there is a waiting list for months if you have not got the right connections. I am out all the time meeting clients and it is vital that I look my best.’

Kimberley added that her hormones were  ‘all over the place after having Jonah’.

‘So to add hair loss into the equation so soon before I returned to work was an absolute nightmare,’ she said.

‘I was really worried about going back with my hair so thin and lacklustre.

‘I started taking the supplements and within a month I could see the difference and after three months it was just like it was before my pregnancy. I was stunned at the difference and I could feel my self-confidence surging as I prepared to go back to work.’ 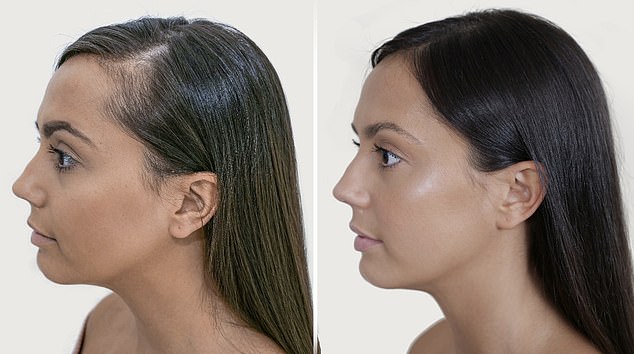 Love Island star Tyla Carr, 29, (pictured before and after taking the supplements) says she never thought postpartum hair loss would happen to her

She added: ‘I had read about women losing their hair after stopping breastfeeding but I never thought it would happen to me. Sadly it did.

‘After having Archie I had these two big bald patches on both side of my head by my hair line, and I also didn’t realise that I had even bigger balder patches around my ear.

‘My hair used to be lovely and thick, it was devastating to see how thin and lacklustre it had become with bald patches around the temples.’

After two months of taking Hair Gain supplements, Tyla said: ‘I don’t have to hide my hair any more. I was going to events and I was worried about people taking photos.

‘But now it’s all grown back. It’s insane, I’ve been taking these Hair Gain tablets for over eight weeks now and I’m so thrilled with the results.’ 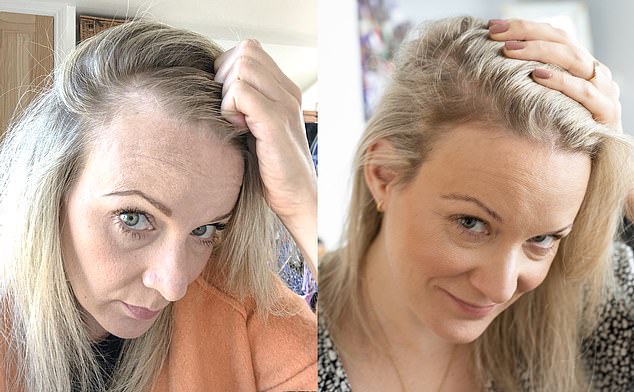 Lucy Palmer, who created Hair Gain after suffering from postpartum hair loss herself (pictured before and after using her product)

Mother-of-two Lucy Palmer, who lives in London, came up with the formulation for Hair Gain, after losing hair herself, which she described as ‘horrible’.

While men’s hair loss may be less taboo, it can still cause distress.

And it appears more men may be seeking to treat hair loss using transplants.

Dr Manish Mittal, surgical director of Mittal Hair Clinic, said: ‘Every year we see a spike in hair transplant bookings for December. Sometimes it’s a gift from a partner, but often it’s just the best time for men to have the procedure.

‘The extra bank holidays and time away from the office gives people the chance to heal without having to take time off.

‘We’re expecting this Christmas break to be among the busiest ever, with interest growing year on year. Internet searches for hair transplants have doubled since 2015, with more and more men looking to surgery to boost their confidence.

‘This time of the year can highlight men’s hair loss as they look through pictures of Christmases past. This month alone I have seen consultations surge, with many inquiries from men’s partners.’

She said: ‘I lost handfuls of hair each day and clogged the bathroom plug on numerous occasions.

‘Losing my hair really knocked my confidence and I found it really scary the first time round.

‘One in four women suffer from post-partum hair loss, so that’s a problem that nearly 150,000 women have to deal with each year.’

This year, Lucy Palmer commissioned a survey of 2,000 women in the UK and 24 per cent said they had suffered from postpartum hair loss.

She was determined to deal with this huge problem of female hair loss and raise awareness of what is still a taboo subject for many women.

After a year of researching ingredients that have been found to boost hair growth.

Lucy said: ‘The more I spoke to other women the more I realised that hair loss is a huge problem.

‘While I suffered with postpartum hair loss, there are many other causes too, stress, anxiety, over-styling, hormonal fluctuations, menopause and nutritional deficiencies.

‘All in all, nearly eight million women in the UK suffer from hair loss at some point in their lives and it’s incredibly embarrassing and stigmatising.’

When Lucy had her second child Charlie, now one, she found the problem was even worse this time around, experiencing significant hair loss at the temples.

However, she said: ‘The experience wasn’t as scary as it was when I first went through it, knowing I had a nutritional product that would help was hugely reassuring for me, and it worked – as the hair quickly started to come back.’

Lucy says she is proud that Hair Gain is helping thousands of women to stop their hair loss while encouraging discussion and breaking down the taboo.

‘This is why Hair Gain was born,’ she said. ‘It brings me so much joy to see women with their hair and confidence restored knowing it has helped.’

Hannah Betts’ Better…Not Younger: Why you need to layer up your beauty regime, too…

DR MAX PEMBERTON: I agree with Dame Sheila Hancock about it being fashionable to cry in public. I cried every day for a year… it didn’t help me!

Yes, it cost me £800, but thanks to this radical hair treatment I’ve got my confidence back after cancer