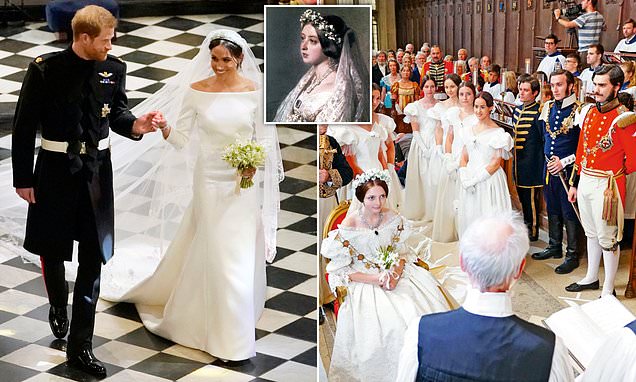 The wedding that inspired Meghan and Harry: Queen Victoria’s very modern ceremony set the tone for all future royal nuptials – but a new BBC2 show reveals that it didn’t quite go according to plan

Another royal wedding? Haven’t we had enough this year? Well, not quite.

New BBC2 documentary Victoria & Albert: The Wedding is an ambitious restaging of Queen Victoria’s ceremony, researched down to the last sprig of orange blossom by historians, that re-creates the happiest day in the life of the queen in honour of her bicentenary in 2019. Or was it?

I have the honour of an invitation: ‘The Lord Chamberlain is commanded by Her Majesty to invite you to attend the ceremony of Her Majesty’s marriage in the Chapel Royal, St James’s Palace, on the Tenth of February, 1840…’

Although the dress code is ‘ladies without trains’ – the chapel at Winchester College, which we’re pretending is the Chapel Royal, is too small for such extravagance – I still feel tragically under-dressed for this grand occasion: no fan, no jewels, no Court feathers bobbing on my head like a monstrous fascinator.

But I do have a ringside seat. 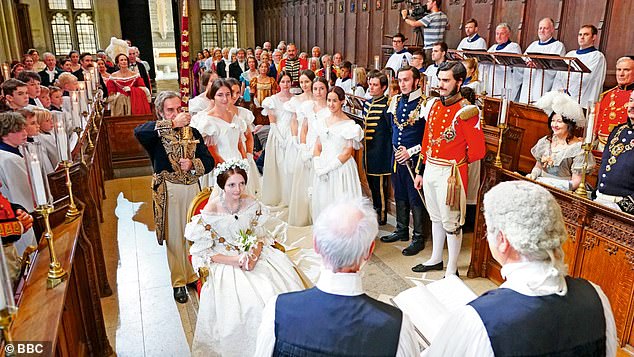 Royal historian Dr Lucy Worsley, explores the marriage of Victoria and Albert ahead of a new BBC2 documentary about the couple’s wedding (pictured: BBC’s re-creation) 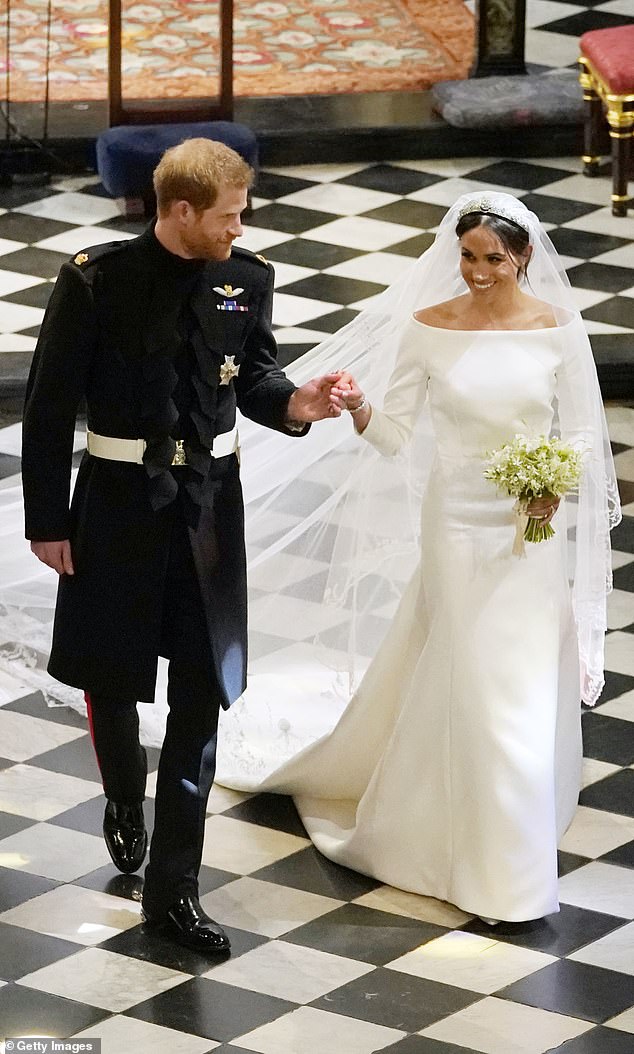 Albert is standing at the altar rail, pomaded and handsome.

And here comes the bride and her bridesmaids – there are only eight, but Victoria had a dozen – bumping into each other because her 18ft train is too short for so many to carry.

According to royal historian Dr Lucy Worsley, who presents the show, we’d have been inhaling the scent of camphor, used against clothes moths, and musky perfumes with a basenote of civet cat oil.

And we’d be damp because it was chucking it down outside.

Let’s remind ourselves why this wedding was happening.

By 1840 the 20-year-old queen had been reigning for less than three years but her popularity had plummeted.

As viewers of ITV’s Victoria know, she was party to spreading rumours that her mother’s lady-in-waiting Lady Flora Hastings owed her expanding waistline to an illegitimate pregnancy.

With Victoria’s connivance, Lady Flora, a virginal spinster, was subjected to a brutal internal examination – but her swollen belly turned out to be a tumour on her liver from which she died months later.

For this lack of compassion, Victoria was hissed at in her own drawing room at Buckingham Palace.

She was in need of guidance and the steadying hand of a husband.

‘There’s quite a lot of pragmatism behind the fairy tale.’ 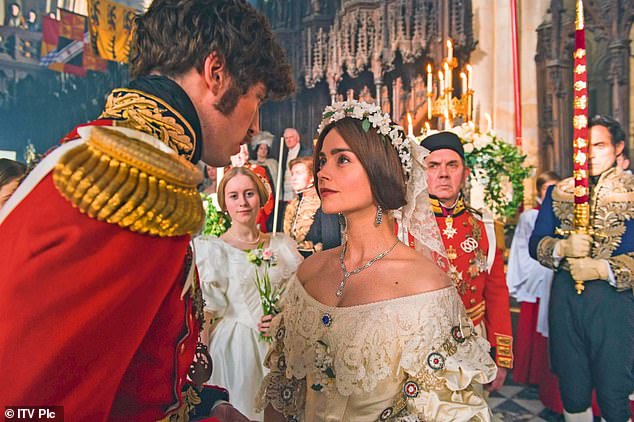 By the time Victoria proposed to her German cousin Prince Albert of Saxe-Coburg and Gotha, she found him much improved since their first meeting in 1836 when they warily eyed each other up as 16-year-olds.

Victoria fell in love with Albert, describing him in her diary as ‘an Angel’.

Albert was more reticent; when he arrived in England in October 1839, for his second visit, he had resolved to wriggle out of the marriage, resentful that Victoria had kept him dangling.

Yet Victoria’s PR makeover was so successful that we still believe in this couple as the greatest royal love match.

That’s why her beloved prime minister and mentor Lord Melbourne insisted on the modern wedding that has shaped all future royal weddings, even that of Harry and Meghan this year.

Instead of a traditional intimate evening ceremony, Victoria’s was in the daytime, with crowds cheering the queen as her carriage rode from Buckingham Palace to St James’s, then back, and on to Windsor for her honeymoon.

Back in the chapel for the re-creation, and Albert has entered on a fanfare of organ music – Handel’s See, The Conquering Hero Comes, a sop to his bruised ego as Parliament hasn’t approved him as large an income as he feels he deserves.

He is wearing a field marshal’s dress uniform. He’s only 20, with no military experience – it can’t make him any less nervous that he’s feet away from a national hero, the Duke of Wellington.

Moving down the aisle, Albert kisses Victoria’s mother, the Duchess of Kent. 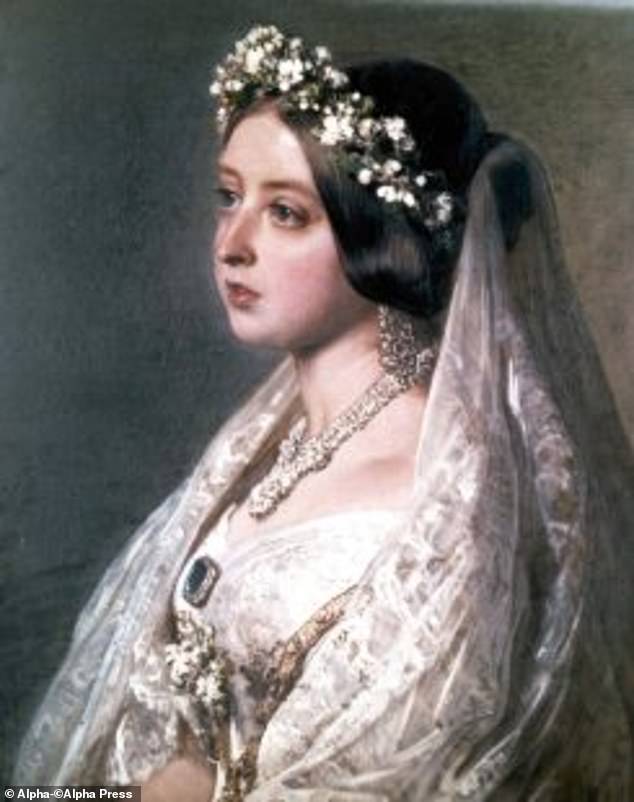 Victoria wanted to marry as a submissive girl in love (pictured: A portrait of the real Victoria in her royal wedding outfit)

The queen loathes her mama and keeps her at arm’s length. Sir John Conroy, the mentor who tormented Victoria throughout her childhood, has been left off the guest list.

Albert plans to get rid of her – there won’t be three people in this royal marriage! Albert has also tried to interfere with the choice of bridesmaids, who are supposed to be of unsullied reputation.

‘A very moral Albert discovered some were the offspring of adultery,’ explains Lucy.

There was Lady Sarah, daughter of the promiscuous Lady Jersey; Lady Eleanora, whose parents had divorced; and Lady Ida, whose mother was one of Victoria’s uncle William IV’s illegitimate children by his mistress Dorothy Jordan, an actress.

Lord Melbourne, however, was pragmatic: he said there simply weren’t a dozen completely respectable aristocratic young ladies to find.

Today, our Victoria approaches the altar to Handel’s A Virtuous Wife Shall Soften Fortune’s Frowns.

After the ignominy of proposing, as protocol demands, she wants to marry as a submissive girl in love, not a queen. 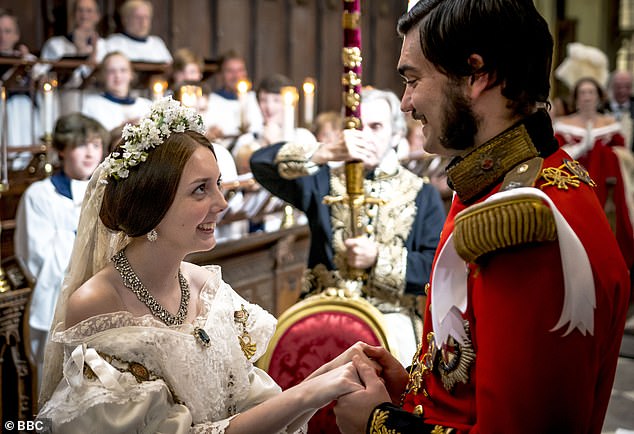 Her cream satin dress with a flounce of Honiton lace, made by her dressmaker Mary Bettans, is simple by royal standards.

For this re-creation, it has taken costume designer Harriet Waterhouse – who was a tailoress on the BBC’s A Stitch In Time – five days and nights.

The bridesmaids’ dresses, with roses pinned to tulle skirts, were designed by the real Victoria: again, so simple there were comments at the time that the young ladies looked like village girls.

Our Victoria, like the real queen, wears imitation orange blossom in her hair, not a crown; her jewellery is low-key by royal standards: a sapphire brooch, a wedding gift from Albert, and her Turkish diamonds.

I hear Victoria promising to obey, despite the Archbishop of Canterbury having given her the option to omit that from her vows.

She’s the most powerful woman in the world, but her groom will assert his influence.

When he pledges his worldly goods to his bride, it’s hard not to laugh.

Albert is aware that no one else thinks he’s much of a catch.

The ceremony is brisk, only 21 minutes long.

On the way out, Victoria kisses her aunt Adelaide, the queen dowager – and offers a cool handshake to her own mother.

What a shame we aren’t invited to the wedding breakfast.

Food historian Annie Gray has re-created two dozen dishes from the original menu of around 80.

She’s made five soups, turbot in lobster sauce and beef with truffles. 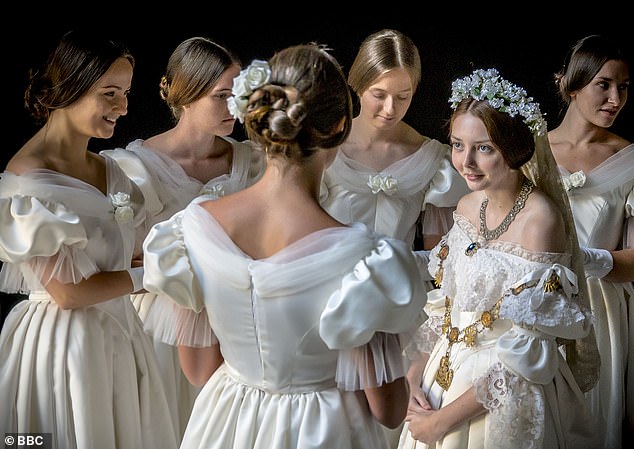 And ‘a showstopper’, as she describes it – two pigeon pies topped with a taxidermied pigeon.

There are millefeuilles and brown bread pudding à la Gotha.

And a gigantic wedding cake.

There were comments in the press at the time about Victoria’s cake, which was three yards across, weighed 300lb and was topped with sugar figures of the couple bizarrely dressed in togas.

It was certainly a technical challenge: decorations for today’s version had to be made with the help of 3D printers.

On that evening in 1840, spectators cheered the couple on their way to Windsor.

Then, they were finally alone.

But Victoria had a headache… ‘My dearest dearest dear Albert sat on a footstool by my side, and his excessive love and affection gave me feelings of heavenly love and happiness,’ she gushed in her diary.

By bedtime Victoria was vomiting. ‘It was a migraine,’ says Annie Gray.

‘She was prone to nervous exhaustion.’

Then they went to bed. 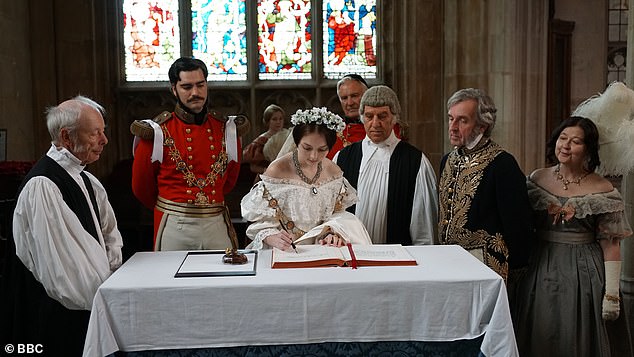 Lucy says although Victoria and Albert’s wedding gets dressed up as a fairy tale, it’s not how the couple described it (pictured: BBC’s re-creation)

Victoria said she lay in his arms and there was “purity and religion in it all”.

It was memorable, but they weren’t swinging off the chandeliers.’

Annie concurs, ‘Albert wasn’t that into sex: she was but he wasn’t.

‘He never had a mistress, which was really unusual. He wasn’t that up for it.’

By the next morning, ‘Albert was feeling very poorly,’ Victoria wrote in her diary, ‘and had to remain quiet in his room.’

So the four-day honeymoon can’t have been much fun. And to her horror, within weeks Victoria was pregnant.

And so the seeds of their stormy marriage were sown.

‘It’s not happy ever after, that’s the royal propaganda machine,’ says Lucy Worsley.

‘It gets dressed up as a fairy tale, but that’s just what they’ve told us!’

Yet traditions were invented that day that we still cherish today.

‘Everyone who has a big white wedding is copying Victoria,’ says Lucy.