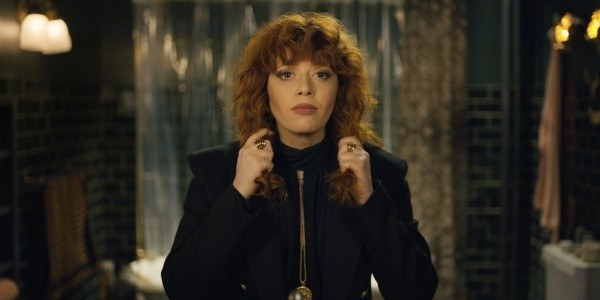 Being a mess on camera is what Natasha Lyonne does best. Thankfully, 2019 provides one more opportunity to see her doing just that: Netflix's latest series to binge-watch, Russian Doll. In the trailer for the limited series, which clocks in at eight episodes, Lyonne's world is flipped upside down after she attends a party.

"Let's fuck this party in the mouth," she says with her characteristic gravel-voiced apathy, as Tommy James & the Shondells' "Crimson & Clover" plays, before she leaves the event. She doesn't get far, though. After screaming "What I do with my time is my choice, my business, baby" as soon as she hits the street, Lyonne dies an untimely death, being struck by a taxi. What happens next is a Groundhog Day–like repeat—with the wit and afterlife setting of Dead Like Me.

Fast forward and Lyonne is back at the party again, and seemingly alive. This time after leaving, though, it's a flight of stairs that kills her. "Jesus fucking Christ that's dark," she says in the trailer, "I keep dying and reliving the same night."

"Does it hurt?," one of her friends asks, to which she replies, "Yes. I'm not fine. I'm questioning my own sanity." The trailer will make you do the same.

Russian Doll, which premieres February 1 on the streaming service, has impressive credentials beyond the cult-adored Lyonne. She cocreated the show along with Amy Poehler and Leslye Headland, who executive-produce on it as well. Jamie Babbit helmed the limited series, which was written by Lyonne and Headland. The series also features her Orange Is the New Black costar Dascha Polanco, who makes an appearance in the trailer. Plus, it stars Greta Lee of KTown, Yul Vazquez of Captain Phillips, Elizabeth Ashley of Ocean’s 8, and Charlie Barnett of Chicago Fire.

Oh, and Lyonne is totally okay with still being called an It girl, as she told W. “I’m 37—I still consider it an honor," she said. "I remember being an It grl in the '90s. And I’m just impressed that I’m still invited…. ‘It girl’ is one of those phrases we tend to throw around too much, but it certainly never stops being flattering.” The accolades will keep on coming with Russian Doll.

If You’ve Ever Wanted Long, Sleek Hair Like J Lo, This Is What You’ll Need