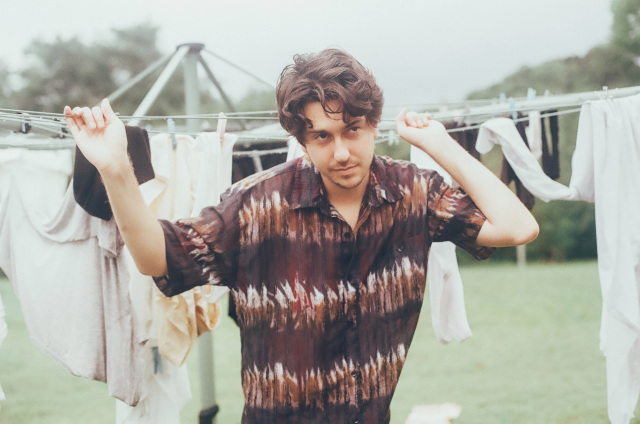 At first, everyone thought Nat Wolff was crazy. He was just wrapping work on the miniseries “The Stand,” which eerily enough features a pandemic, as the world around him was beginning to worry about the coronavirus. Having seen how things play out on the show, he was urging his family and friends to stock up at the grocery store and “stop listening to Donald Trump,” a behavior never seen before but adopted in hopes of believing the president was right in downplaying the virus.

“It was so eerie. It was just creepy,” Wolff says. “As soon as we finished, I felt like the world was about to end because in ‘The Stand,’ everyone dies. Everyone dies from the pandemic, except for the few characters that you see on-screen. So I had a really panicky feeling, but at the same time I do feel like I was more prepared than certain people because I was ready to go. But when everyone else [started] panicking, I thought, ‘OK, good,’ because I was already panicked. Now we’re on the same page.”

Wolff made it back to Los Angeles just in time for lockdown, ending “The Stand” with scenes playing out in real life across the globe.

“I was pretending to be in jail, throwing toilet paper through the jail cell. And then I was reading in the news that the prisoners in Italy were doing the exact same thing,” Wolff says. “So it was really trippy.”

The rising actor has since spent much of the pandemic allowing himself to take time off for the first time since he began acting as a child, reconsidering where he wants his career to go and what it means to be creative. And to relish in his pre-pandemic projects: in addition to “The Stand,” which premiered earlier this year, he can be seen in Gia Coppola’s new movie “Mainstream,” out today, alongside Andrew Garfield and Maya Hawke.

“In a certain way, I’ve actually really, really benefited artistically from this time off,” Wolff says. “I was working as a kid and then I kind of went to high school and I’ve pretty much been going from set to set since I was like 18 or 17. So this has been my first time having that time off. And obviously this is a really horrifying time, but, like, I studied ‘Hamlet’ for six months with a Shakespeare teacher and I’m in a Chekhov class. I’ve gotten to just spend time making music with my brother. And so in a lot of ways, I’ve gotten to do a lot of really exciting things during this horrible time. But now I’m ready to get back to set. I’m like, ‘OK, I’m done.’”

Wolff has just returned from a multi-month trip to Australia, where he flew to visit his girlfriend and ended up staying for awhile given how COVID-19-free the country is. They drove in a caravan down to the south of Australia, living like a nomad for the first time in his life and loving every minute of it until the U.S. called them back.

“I hadn’t been around more than three people since March 5. And then I just walked into this, it was Halloween. I walked into the Halloween party that they were having, I was just like, ‘oh my god,’” he says.

“Mainstream” reunites him with his “Palo Alto” director Coppola, which he says is his favorite movie he’s been in. Garfield plays a social media star in a story about the rise and fall of fame, loosely based on the Elia Kazan movie.

“I play a very true-blue guy. It’s a love triangle with me and Maya Hawke and Andrew Garfield. And I’m really excited about that,” he says of the film.

Up next, he is set to play his hero Paul Westerberg in “The Trouble Boys,” a biopic about The Replacements.

“One of the hard things with that is to do crowd scenes because you need the audience and all that stuff. So that’s still being figured out how exactly we’re going to do that,” he says. “But it’s a dream. I’m going to get to meet Paul Westerberg, we’ll see how that goes. And yeah, I know it’s an incredible story; they were these geniuses and they were almost these beautiful failures in a certain way. Like they wanted to fail, you know? And then at the same time, they ended up creating this incredible body of work and they had these really troubled childhoods and the book is just incredible.”

He and his brother Alex have also been hard at work on new music they plan to release, but Wolff says if anything the pandemic has shown him he has other interests aside from music and acting, and that his creativity is worth exploring in new ways.

“I run on being creative and if I’m not, I get sad and I feel kind of like rudderless. And in the beginning of this, I don’t know, like a lot of people in the beginning of this, I was just anxious. And then also as it went along, I remember people being like, ‘This s–t was cute for a second.’ We were all staying inside, but it kind of got old. But then it just clicked in: I have a lot of other interests besides acting and music, too, that I got to dive into,” he says. “It’s been really exciting to find the, it’s like a lot of parts of myself and my creativity that I haven’t had the time or the energy to go for. In that way it’s been really exciting.”

Christian Serratos Gets Back to ‘Selena’

Nasim Pedrad on ‘Chad,’ a Teenage Boy Learning His Way