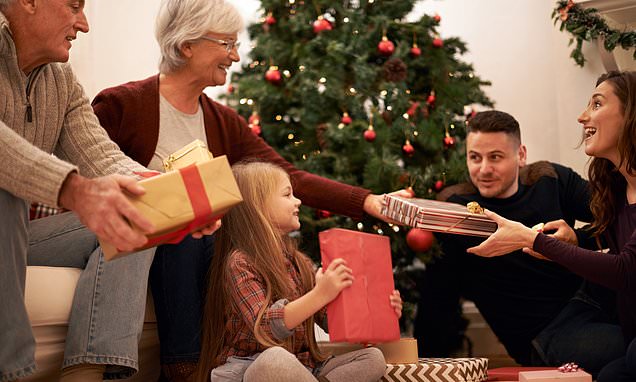 A furious mother is seeking advice after her partner demanded that she does his Christmas shopping on his behalf – and expects her to pay the £700 bill that comes with it.

Mumsnet user, Giadak, took to the British parenting forum to vent her frustration over the Christmas gift giving.

She admitted her and her partner – who have been together for seven years – will be spending the festive period apart, as they both celebrate Christmas Day with their respective relatives.

Although they are spending December 25 separately, the mother was told by her partner to buy for his siblings and other relatives, while he would splash out a fraction of the price solely on his parents. Mumsnet user, Giadak, has been roped into buying presents for partner’s relatives as well as own family

Sharing the dilemma on the site, Giadak wrote: ‘I like to plan gifts – as in make a list of gift recipients, figure out what I want to get for them, then shop online – or if I can’t get it online; I’ll go out and buy it.

‘Saves a lot of time and hassle. We did the list together this year – and all was fine. We then started to shop online on both our laptops respectively.

‘He sent me a list of things that they’d like – but I’m unsure as to what exactly he is contributing.’ 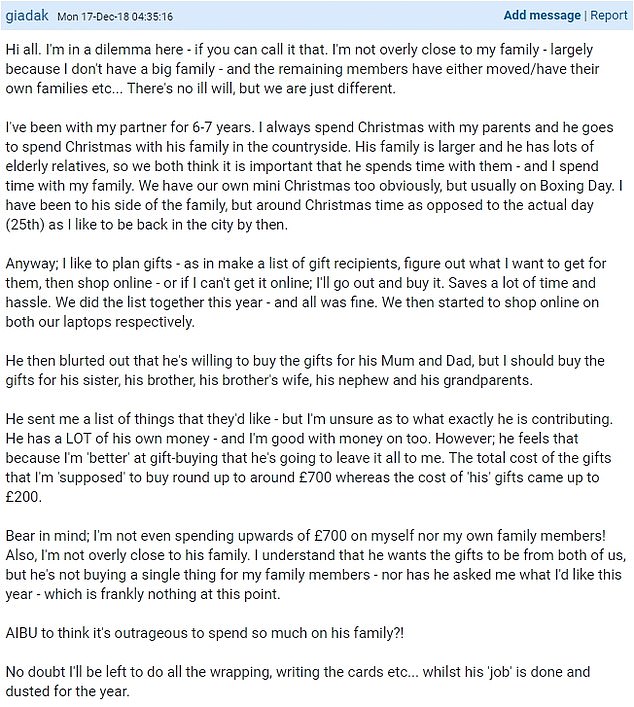 Giadak went on to detail she had to buy gifts for her own relatives, as well as her partner’s, because she is ‘better’ at finding great gifts – much to her annoyance.

She continued: ‘He has a LOT of his own money – and I’m good with money on too. However; he feels that because I’m ‘better’ at gift-buying that he’s going to leave it all to me.

‘The total cost of the gifts that I’m ‘supposed’ to buy round up to around £700 whereas the cost of ‘his’ gifts came up to £200. Bear in mind; I’m not even spending upwards of £700 on myself nor my own family members! Also, I’m not overly close to his family.

‘I understand that he wants the gifts to be from both of us, but he’s not buying a single thing for my family members – nor has he asked me what I’d like this year – which is frankly nothing at this point. In an almost unanimous response, fellow mothers agreed that her partner was being completely unreasonable

‘No doubt I’ll be left to do all the wrapping, writing the cards etc… whilst his ‘job’ is done and dusted for the year.’

Her post was met by a unanimous outrage from fellow Mumsnet users, who were outraged on her behalf.

One replied: ‘I’m sorry but WTF??!!!  He’s getting you to buy presents for his family and take all the glory and leave you with the bill? The short answer is ‘No’.’

Another urged: ‘Just stop! Don’t do it. He is expecting you to do it doesn’t mean you do it!! Stop being a doormat and acting like his desire means inevitability.’

A third added: ‘He is roping you into doing”wife work” and then getting you to pay for the privilege as well?! Not on!’

Giadak believes her ‘love of Christmas’ is what encouraged her partner to share the load.

Adding to the conversation she wrote: ‘Guess I forgot to mention a few things which might ‘help’ in some shape or form.

‘Basically, he knows I love Christmas – and everything that comes with it. I especially love magical it can be and all that good stuff.

‘In his warped mind; he feels like he’s doing me a favour as I get to do Christmass-y things – but he fails to realise that it also costs time, effort and money. I’m financially better off than he is – and he knows this, but I’m also not an ATM!’

But the advice remained much the same, with several users advising the mother to tell her partner where to go.

‘Simply tell him to f*** off’ wrote one, while another chimed in ‘He’s made a list but he expects you to go ahead and spend your time and money ordering the gifts? How about no?’

These 2018 Holiday Shipping Deadlines Are Coming Up Quick, Here’s When To Order By