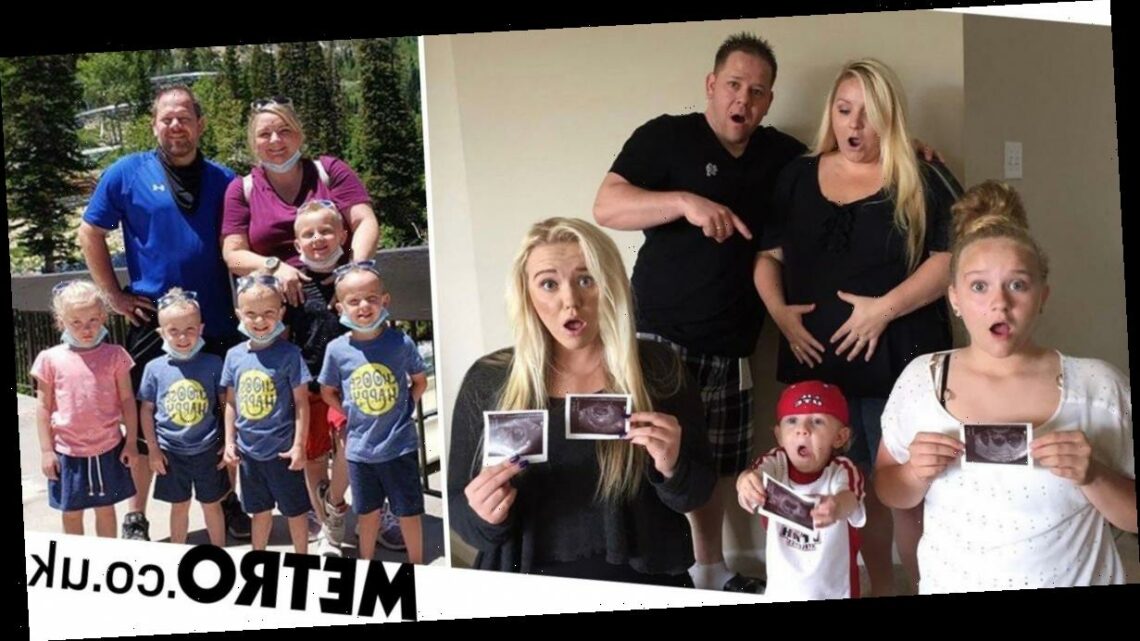 April and Phil Gardner always wanted a big family, but the childhood sweethearts struggled with fertility issues and went through six miscarriages following the birth of their first baby.

Now, after years of a difficult journey, the couple have welcomed miracle quadruplets, meaning they now have seven children.

The couple, who met at school, discovered they were expecting their first child when April was just 18.

‘Back then, I never dreamed fertility would be something I’d have to think about.

‘I’d fallen pregnant with Rilee easily enough, after all.’

But shortly after Rilee was born and the family moved to Germany, for Phil’s job in the Air Force, April began to experience painful cramps and nausea.

She was diagnosed with endometriosis, a condition where tissue usually found in the lining of the womb grows in other parts of the body and can cause fertility issues.

Despite this, doctors were confident that April would be able to have more children, and with no immediate plans back then to expand their family, this didn’t become an issue until six years later, when April had her first miscarriage.

‘I had some bleeding and saw the doctor who said I’d miscarried,’ she said. ‘I hadn’t even known I was pregnant.’

Conceiving again shortly afterwards, in 2002, the couple were delighted when Whitlee was born.

But in 2005, when Whitlee was around three and April and Phil began discussing giving her another sibling, they had no idea that it would be 11 long years before baby number three came along.

April fell pregnant in around August 2005, soon after they began trying, but, just eight weeks later, she miscarried again.

She recalled: ‘I can’t explain it. I just woke up one day with a weird feeling that something was wrong – like a dread deep inside me.

‘I went to the loo and there was a tiny spot of blood there. I knew right away what it meant.’

Later that day, an ultrasound confirmed April had miscarried for a second time.

Six months later, in early 2006, April found out she was pregnant again – but at six weeks pregnant she lost the baby.

‘After that, I felt like I needed a break for a while,’ April said.

‘I couldn’t understand – I’d had two children by that point. Why was this happening now?

‘I became obsessed with reading every little thing I could, trying to get some answers.’

After eight months of trying, April sought advice from her doctor in mid-2007, who discovered she was having a severe endometriosis flare-up.

Next, she had a laparoscopy, where a tiny telescope was inserted into her abdomen, before surgeons made small incisions to cut out the patches of endometriosis.

Sadly, April suffered two more miscarriages between 2008 and 2010 – one at eight weeks and the other at 10.

‘The 10 week one – my fourth – was very tough. That really took me down,’ she said. ‘I’d been so close to my second trimester. I was almost out of the scary zone and then it all went wrong.’

Over the years, April also tried various fertility treatments including clomifene – a drug that encourages the release of an egg every month – all to no avail.

She had several tests to try to determine the underlying cause of her issues – discovering she had low levels of the hormone progesterone, which prepares the body for potential pregnancy after ovulation.

While the news was hard to hear, she felt she at least had some answers.

In 2010, April and her family moved to Alabama, US, for Phil’s job, where she found a fertility centre that accepted her medical insurance, meaning she could get specialist treatment.

She explained: ‘I had a bunch more tests, including one where a radiologist watched as a dye was injected into my reproductive system.

‘It showed up that the left side was weakened and damaged by endometriosis and that the PCOS had left some cysts on my ovaries that were too small to surgically remove.

‘Essentially, my body couldn’t prep itself for pregnancy.

‘But the way I viewed it, the more information we had, the more of a plan we could make.

‘I also focused on the fact I already had two beautiful babies – my daughters.’

Prescribed follistim and progesterone injections to help stimulate her ovaries, after three months, she fell pregnant before miscarrying for a fifth time just six weeks later.

Resuming the injections, April fell pregnant once again three months later, only to have her sixth miscarriage at eight weeks.

In 2012, following injections at the fertility clinic, April discovered she was expecting again.

This time, she carried her baby to full term, with little Jaxton arriving in February 2013.

After that, the couple did not think they would have any more children.

But, in early 2015, they became aware of the huge age gap between Jaxton and his sisters and decided they wanted to give him a sibling to grow up with.

So, returning to the same fertility clinic in Alabama that had helped them before, April conceived after just two months of treatment, only for a bombshell to be dropped at her six-week scan: she was pregnant with six foetuses.

She said: ‘I remember looking up at the screen and seeing two little blobs. I cried out, “Oh my gosh, it’s twins!” The sonographer told me she could see more than two. She fetched a doctor to check and they counted six.

‘I was gobsmacked and laughing with sheer disbelief. Phil was away with work, so I text him six photos of the separate sonograms.

‘He phoned me and said, “Why have you sent me six of the same picture?” I told him, “Look again – they’re different babies”.’

Four of the foetuses were doing well, but two had no heartbeat – leaving April with a difficult decision.

‘Doctors told me about something called selective reduction, which would basically be lowering the number of foetuses to give the others the best chance at survival,’ April said.

‘I understand why they asked, but it didn’t feel right. I had been through so much that even to hold one baby at the end of it all would be a miracle.

‘Besides, how could I have chosen which ones to keep? Phil and I talked things through and decided we would roll the dice and leave it all up to fate.’

As predicted by doctors, two of the foetuses still had no heartbeat by 10 weeks and their tissue was absorbed by the others, leaving April carrying quadruplets.

Thankfully, April’s closely monitored pregnancy progressed well, and at 30 weeks and two days, the mum delivered her non-identical quadruplets, three boys and a girl, on 16 October 2015.

First came Ryker, weighing 3lb 1oz, followed by Tallon at 2lb 12oz, then Bowen and finally the only girl, Berklee – both 2lb 8oz.

As they were premature, the babies initially required oxygen and had to stay in hospital while they grew stronger.

April added: ‘I knew they were fighters.’

After five weeks, the babies were all sent home within two days of each other – first Ryker and Tallon on the same day, then Berklee and finally Bowen.

Now, they are thriving four year olds, who have forged an unbreakable sibling bond.

‘The first year is a complete blur – no kidding, I got about 45 minutes sleep a night,’ said April.

‘Now, at any one time, there are toddlers all over the house – running, crawling, rolling around.

‘We’ve childproofed everything, but soon learnt that childproof and quadproof aren’t the same.’

These days, April’s family life is chaotic, but exceptionally happy.

April explained how Ryker is arty, Tallon is sensitive and loving, Bowen is a ‘little rocket’ full of energy and Berklee is a true diva.

‘I try to buy them joint presents or stock up when sales are on to keep costs down, but the truth is, there’s no real cheap way to run a house with so many kids,’ the mum said.

Joking that her piles of laundry are ‘endless’ she has also come up with some clever hacks to keep things in order.

She added: ‘When we go out to eat, we’ll make them bibs out of Press n’ Seal, which is a sort of cling film.

‘It means they can be messy without leaving any stains on their clothes.

‘They aren’t identical, but they looked very similar when they were first born, so we assigned them all a colour, meaning we could tell apart things like their bottles, clothes and dummies.

‘They’ve sort of stuck to them as they’ve grown older – Ryker is red, Tallon is yellow, Bowen is blue and Berklee is pink.’

Now April hopes that her story will give hope to other couples facing fertility issues.

She said: ‘Life now is absolutely crazy. The house is like a circus – but I wouldn’t change it for the world.’