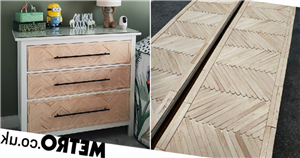 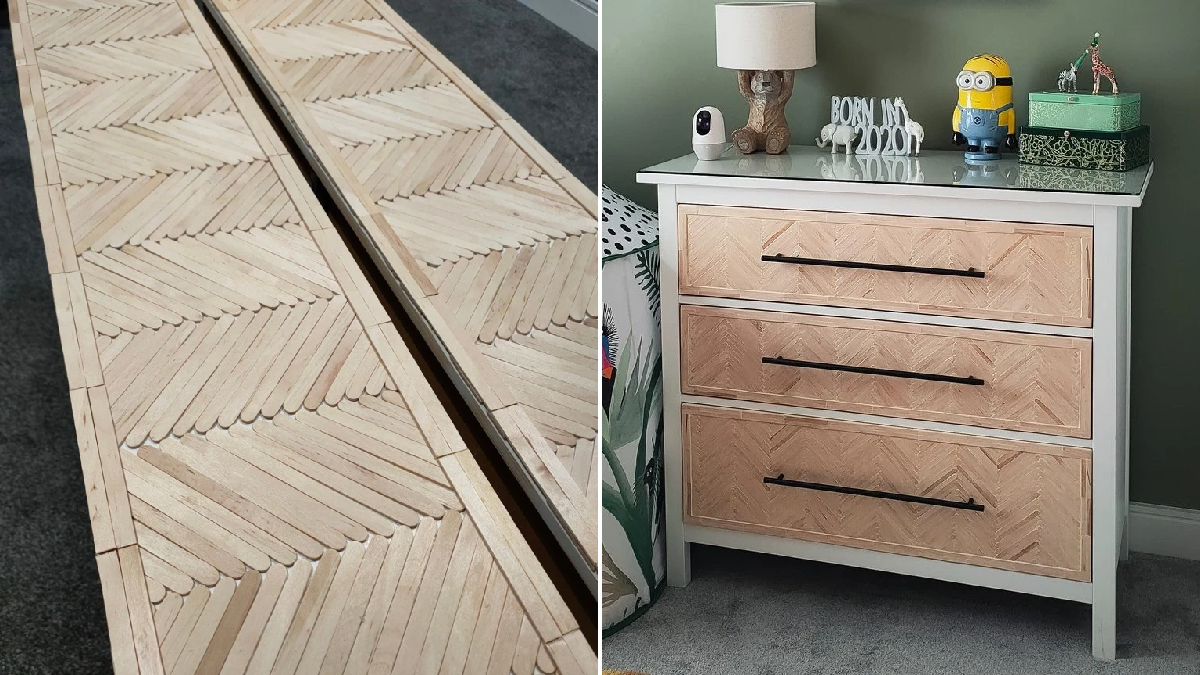 Herringbone is everywhere, but the on-trend furniture pattern can be really expensive.

Not if you do it yourself, though.

Lauren Olphert, a mum of one who lives in Northern Ireland, decided to upcycle an old Ikea dresser with a herringbone style, using surprising (and incredibly cheap) materials.

Lauren sourced 1,000 lollipop sticks on Amazon for just £7, and set about using them to transform her her old, boring dresser from drab to fab.

‘I got inspiration for the project when I came across two DIY pages on Instagram that had upcycled similar units with lollipop sticks,’ the 30-year-old told money-saving Facebook group DIY On A Budget UK.

‘I combined the two ideas I had seen to create the finished piece. I used around 800 lollipop sticks, natural wood filler, sand paper, clear varnish and black handles. The total cost was around £30.’

To start the job off, Lauren had to find the centre of the Ikea Hemnes drawers, and then she began placing the sticks in a herringbone style.

‘When I got to the top where some of the sticks were overhanging the drawer front, I used cutting pliers to trim before sticking down with wood glue,’ she says.

‘Once I had all the sticks in place, I sanded down the edges with sandpaper or used an electric sander.’

When the sticks were flush to the drawer, Lauren created a border by trimming the lollipop sticks straight on both sides.

‘I then began to wood fill all the gaps and edges, then sanded down and again filled any gaps I’d missed,’ she explains.

‘Then, once I was happy with the sanding, I began to use clear wood varnish and did two to three coats of this.’

Finally, she drilled the holes for the handles – ensuring they were in the same position and centred.

‘I placed the drawers back into the unit and that was when the project was finished,’ she says.

‘I used gorilla wood glue to stick down the lollipop sticks. I already had this from previous projects so didn’t need to purchase new, and the same with the sandpaper.

‘I love the finished look and it was totally worth the time and effect to get it finished.  It took many evenings as I did it when my son was in bed. It’s amazing what you can do to a piece of furniture for a small cost.’

Lauren admits that the project requires a lot of patience, and that it can get quite messy.

‘But the results are totally worth it and something you can be proud of,’ she adds.

‘I’m obsessed with home design and upcycling. I have a TikTok page (@laurenolphert2) where I enjoy uploading arts and crafts, DIY projects and ideas and furniture I’ve upcycled to inspire others to have a go.

‘This was a very cost effective way to change up the unit, without having to buy a whole new unit of similar style.

‘Considering other units out there with herringbone styles cost up to £500 I think I’ve saved a good amount considering I chose to upcycle instead of buying new.’