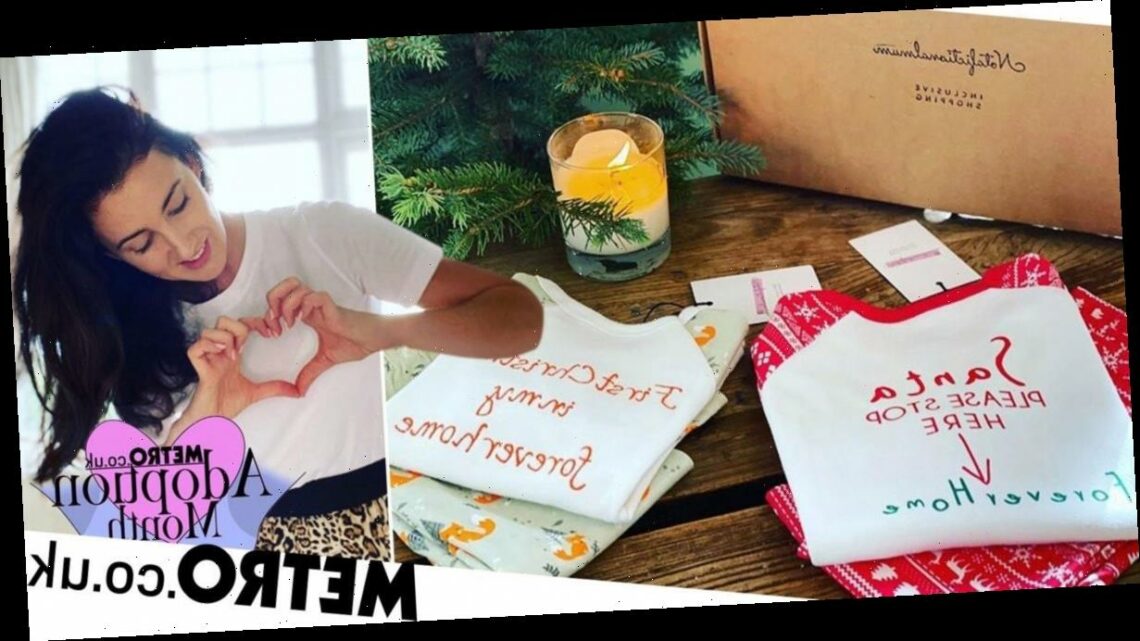 Standing in the department store, a mum-to-be looked at the pram she wanted to buy.

The woman, who can’t reveal her name but posts online as Not A Fictional Mum (NFM), didn’t have a bump or look pregnant. She was becoming a mum through adoption and waiting on her 21-month-old son coming home.

As the store assistant turned to her, she asked ‘When is the mother due?’,  her heart broke.

After five years of dealing with infertility and a long adoption process, she was finally going to have a son – but it didn’t quite fit with the stereotypical idea of what becoming a parent is like.

She went on to adopt her son, nicknamed Nemo, in August 2019 and inspired by her experiences of shopping as an adoptive parente, she has launched a clothing line with slogans to represent the experiences of families like hers, with money going to Barnardo’s.

Speaking to Metro.co.uk for Adoption month, she explains: ‘I’d waited so long to have children and gone through this whole process and it was hard going into a shop and feeling basically invisible because I didn’t have a bump.

‘I want my little boy to grow up and walk in somewhere one day and see things that acknowledge how he came to us.’

NFM and her husband started trying for children five years before their son arrived. They went through a miscarriage and spent £25,000 on fertility treatment, before deciding to stop.

‘Infertility is a really awful disease which just doesn’t get spoken about,’ she says.

‘That’s when adoption became very obvious for us.’

After their final round of infertility treatment, they took some time to ‘grieve’ for the route they thought they were going to take before starting the adoption process.

In September 2018, they started approaching adoption agencies and local authorities, eventually deciding to go with Barnardo’s.

After going through the adoption process, they were approved in January 2019 and awaited being matched.

Through the process they had a change of heart and decided to be more open to the possibility of a slightly older child, which eventually resulted in them being matched with Nemo.

NFM explains: ‘Initially, we were very set that we wanted a very young baby because we had the illusion that in some ways, it could be maybe a bit easier.

‘As we went through our training, we realised that wasn’t the case and that we were boxing ourselves in. Something that was really important to us was personality. We had this idea of having a really naughty little boy and you wouldn’t be able to tell that with a baby.

‘We started to look at children that were over a year but under two and thank god we did. Our son was 21 months when he came to us and when I stated the process I was adamant that wasn’t an option for us – I am filled with embarrassment saying that now. If you really want to find the child that is just perfect for you, you need to be more open-minded.’

The couple knew Nemo was what they wanted the minute they saw his profile.

She adds: ‘My husband saw it first and he shouted downstairs “I’ve found him.” He had this amazing hair, and we both have great hair. It said he loved cheese and roast dinners and that is just like us. He loves having his picture taken and his foster carer said he is really really cheeky.

‘We just loved that and knew we wanted to adopt him.’

From there, they were matched and met him for the first time, preparing for him to come home in August last year.

It was during that time that the mum started to get more of an experience of what it was like to be an adoptive parent and how it felt to not be represented or thought about in retail.

Throwing herself into motherhood when her son came home, she had adoption leave from her job.

She admits that while adoption has been amazing for them, there were times where it was difficult and it took their son some time to adjust.

She says: ‘It was hard at first and I don’t think we were emotionally prepared for how traumatising it would be for him leaving foster care.

‘We were so excited about becoming mummy and daddy but he was confused about what was going on.

‘I had to put my big girl pants on and realise it wasn’t about us – it was about making sure our little boy was alright.

‘He was a very anxious little boy and he wanted to be picked up all the time but looking back now at how much he has changed, there is no greater reward.

‘You tell him you love him now and he looks at you and really believes it.’

But this year, as her son was more settled, she decided she wanted to do more to help other adoptive families and make the retail sector think more about different types of parents.

She decided not to return to her job and set up her blog Not A Fictional Mum just a few months ago.

In that time, she has built up over 2,600 followers on Instagram and has now used her platform to launch her clothing line.

She explains: ‘I have been campaigning for equality for all kinds of families. Another example is when I walked into three major card shops, looking to see if they have any cards around adoption and none of them did. I don’t understand how I can get a birthday card for my dog and my dog can get me a birthday card, but I can’t get anything for a friend who has adopted.

‘I just want recognition that this is just a way to have a family. I started writing about it and my inbox was full of messages so quickly from others who felt the same.

‘I felt like I had to do something about it.’

She decided on a clothing line first because during the adoption process, her friends and family had thrown her an adoption shower, to celebrate her son’s arrival, but the t-shirt she wanted to wear had to be ordered from America because nothing was available in the UK.

She started brainstorming ideas and this year, she finally put those into production.

Now, she is selling t-shirts for kids and adults, jewellery and a Christmas collection.

Slogans include ‘Forever home, just checked in’ and ‘Forever mum’ or ‘Forever dad’.

All the children’s clothes feature designs on the back so parents can post pictures without showing their faces.

‘I feel so passionate about this. Other families will feel seen,’ she adds.

You can buy NFM’s adoption range and read more of her blog on her website.

Some of the profits from NFM’s line will go to Barnardo’s, the leading children’s charity. It is calling for more adopters to come forward and welcome a child into their lives. Whatever your culture, religion or background they want to hear from you. Visit their website to find out more.

Adoption Month is a month-long series covering all aspects of adoption.

For the next four weeks, which includes National Adoption Week from October 14-19, we will be speaking to people who have been affected by adoption in some way, from those who chose to welcome someone else’s child into their family to others who were that child.

We’ll also be talking to experts in the field and answering as many questions as possible associated with adoption, as well as offering invaluable advice along the way.