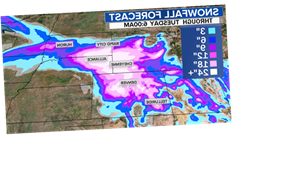 A slow-moving, blockbuster storm is likely to bring the biggest snowfall in decades to parts of the Front Range of the Rockies and western Plains states this weekend, possibly challenging all-time records for some cities. On the warm side of the storm, the first spring season severe weather outbreak threatens Texas, Oklahoma and Kansas.

The massive, whirling storm system was diving southward from the Pacific Ocean into California on Wednesday, providing some much-needed rain and snow after the fourth-driest 18-month stretch in state history. Heavy downpours will bring an inch or two of rain to many parts of the state and over a foot of snow in the higher elevations. 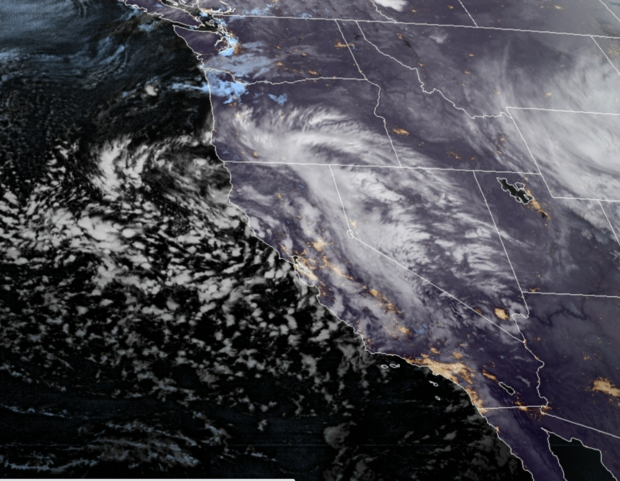 Once the storm reaches the Rockies it will slow down and intensify, using its atmospheric dynamics to funnel warm, moist air from Mexico northward — slamming the moist conveyor belt right into elevated land in the western Plains and Rocky Mountains. This effect of forcing air to rise due to land elevation is called orographic uplift and is responsible for the biggest snowstorms in cities like Denver and Boulder.

While the first round of snow is falling Wednesday in Colorado, Wyoming, Nebraska and South Dakota, it’s the next round, starting later Friday and reaching its apex on Sunday, that will make traveling near impossible, with snowfall rates of 2 to 4 inches per hour. Wind gusts over 45 mph are likely on Saturday, ramping up to 60 mph on Sunday, meaning blizzard conditions will be widespread.

It’s still early, but computer models see the bullseye of heaviest snowfall stretching from Denver and Boulder in Colorado northward into Cheyenne and Casper, Wyoming and northeastward into Scottsbluff, Nebraska and Rapid City, South Dakota. In these areas, 2 to 3 feet of snow may be common. There’s even some chance that isolated locations will pick up as much as 50 inches of snow during this elongated, six-day series of weather events. 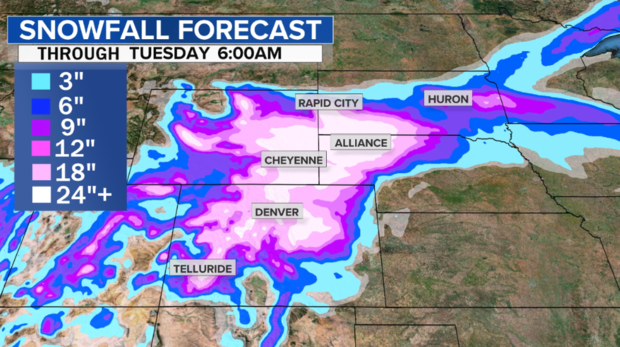 Although it is too soon to know for sure, early indications are that all-time snowfall records may be threatened. That is just as much a product of how slowly the storm is projected to move as it is an indication of the intensity of the storm.

Like many past heavy snowstorms in this part of the nation, it is being caused by something known as a cut-off low. This is a system that is generally cut off from the forward steering of the jet stream. In this case the storm is trapped underneath a warm ridge of high pressure in Canada which acts as a block, allowing the storm to persist for days.

This is how the Front Range gets their biggest snow storms. Warm, blocking ridge over Canada and trapped, cut-off, and therefore slow moving low, funneling moisture north and piling it up against the Rockies. Whirling winds will elevate tornado threat eastward over lower Plains. pic.twitter.com/ywrq1w7q7M

This type of setup is how Boulder, Colorado, set its all-time heaviest 24-hour snowfall record exactly 100 years ago. Like this weekend, a Pacific storm became trapped for days to the south of a stubborn mountain of warm air to its north. That storm in 1921 ended up producing about 100 inches of snow in 4 days.

Denver’s largest snowstorm was in December of 1913 when nearly 46 inches of snow fell. More recently, in a 2003 storm, the city got 31.8 inches. It is not a stretch to say that Denver may see its heaviest snowfall in 18 years or longer this weekend.

This is not all bad news. Right now, the majority of the West is experiencing one of its worst droughts on record, with much of the region in extreme or exceptional drought conditions. 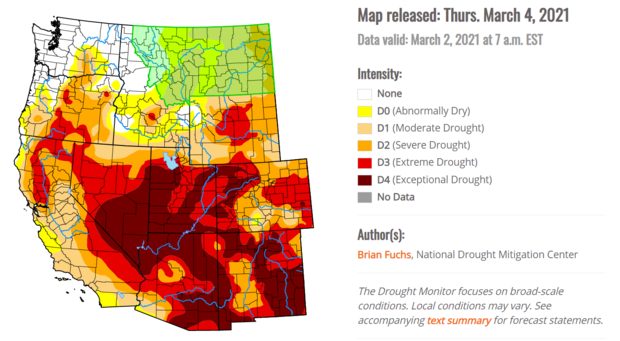 On the warmer, eastern side of the storm, it’s becoming more clear that the system will bring with it the first severe weather event of the season. That means areas from west Texas into Oklahoma and southern Nebraska will need to be on the lookout for severe storms, large hail, damaging winds and tornadoes Friday through Sunday.

On Friday the biggest threat will be from west Texas, near Lubbock, into western Oklahoma. On Saturday and Sunday that threat will shift east towards Oklahoma City and Dallas.

The storm will finally begin to pull away on Monday, bringing with it heavy rain for mid-Missouri and mid-Mississippi Valley areas, where several inches of rain are possible from Thursday into the middle of next week. Residents should be aware of the risk of river flooding.

Whichever form, there is a large amount of #water going to dropped on the central US in the next 7 days. Be aware in the western plains for significant snow falls. Follow @NWS for updates. Some will help with current #drought conditions. pic.twitter.com/uX3k2z9EZG