Newly elected Kooyong MP Monique Ryan has reported to Victoria Police and the Australian Federal Police a series of “racist, misogynistic and threatening” letters sent to her supporters in the inner-Melbourne electorate.

In a statement, the independent MP said her office was first made aware of handwritten notes targeting her supporters displaying corflutes on their properties and volunteers just before election day on May 21. One message circulating on social media, allegedly sent to a Ryan backer in recent days, warns the recipient to “look both ways when you come out your front gate”. 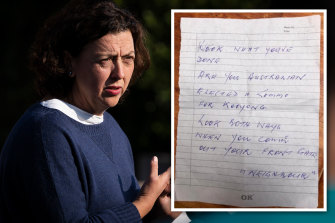 The independent MP said her office contacted Victoria Police and the Australian Federal Police immediately after being informed of the circulation of the letters just before the election. The team is aware of at least five letters that have been sent to residents.

“In recent days, several more of these anonymous letters have been placed in supporters’ mailboxes. Their contents are misogynistic, racist and threatening,” Ryan said.

“It is extremely disappointing that people are being targeted for exercising their democratic rights. These cowardly anonymous threats are very distressing for the people who receive them.

An AFP spokeswoman said: “The AFP does not comment on matters that may be the subject of investigation.”

One social media user posted on Twitter that a Ryan volunteer in Hawthorn received a handwritten letter in recent days. Its contents were similar to ones that had been sent to others in the area who also displayed Ryan’s corflutes outside their homes.

“Look what you’ve done,” the letter stated. “Are you Australian? Elected a commo [communist] for Kooyong. Look both ways when you come out your front gate.”

The letter, which The Age has not been able to independently verify, was signed “neighbour”. The social media user said several residents had notified police.

Ryan, the former director of the neurology department at the Royal Children’s Hospital, narrowly won the seat at the federal election from then-treasurer Josh Frydenberg with the backing of two local groups – Voices of Kooyong and Kooyong Independents – and funding from the Climate 200 group.

Her volunteers put up at least 4000 corflutes in the seat that takes in the inner-eastern suburbs of Hawthorn, Kew, Camberwell and Balwyn once held by former Liberal leaders Robert Menzies and Andrew Peacock.

The former treasurer conceded defeat two days after the election, and thanked the people of Kooyong.

“It’s been an incredible privilege to have served as the local member for the last 12 years,” Frydenberg said at the time. “Kooyong is where I grew up, and where, with my wife Amie, we are raising our family. Every day I have given the job my all.”

Frydenberg has not confirmed whether he will make a return to politics, but told his supporters on election night he still had “gas in the tank”. The Australian last week reported the 50-year-old had set up a private office in the Como Centre in South Yarra.