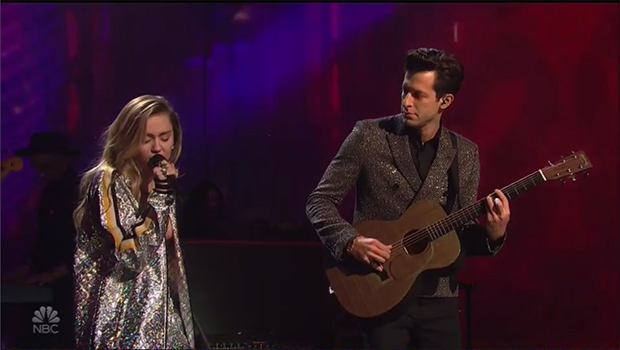 Mikey Cyrus brought down the house singing ‘Nothing Breaks Like A Heart’ on ‘SNL’! Watch her performance below!

Miley Cyrus just slayed with her performance of “Nothing Breaks Like A Heart” as the musical guest on SNL along with Mark Ronson. Not only did she kill it, she stunned with her sparkly outfit — a glittery jacket and matching pants. While she risked a wardrobe malfunction by going braless, Miley managed to pull off a flawless rendition of her hit with no SNAFUS. Seriously, she might have given the best performance of the season. Taking the stage, Miley sang, “This world can hurt you / It cuts you deep and leaves a scar / Things fall apart, but nothing breaks like a heart / And nothing breaks like a heart.” Watch the whole performance below!

It was just last week that Mumford & Sons brought down the house as the variety show’s musical guest. Taking to the stage, the musical group first performed “Guiding Light,” with Marcus Mumford singing, “We’re on the permanent red / The glaze on my eyes / When I heard your voice / The distance caught me by surprise again.”

And who could forget Lil Wayne’s tenure as musical guest earlier this season. Not only did he slay in his time on stage, he also brought on a special guest. That’s right, Halsey made a surprise appearance as the two performed his hit song “Can’t Be Broken.” After finishing up his powerful rendition, Lil Wayne gave the following shout-out: “To all the veterans, thank you.”

We’ll keep you posted with all of the latest SNL sketches. In the meantime, check out of all of the photos from this season in our gallery above.

Should You Text Your Ex To Congratulate Them? Here’s How To Decide

What is Katy Perry’s Net Worth, and is the ‘American Idol’ Judge Married?
World News