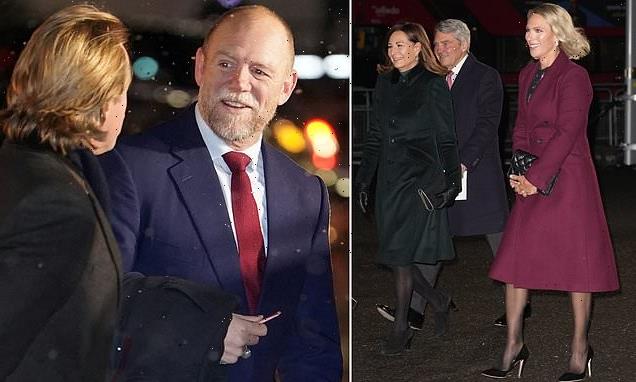 Back in the fold! Mike Tindall joins Zara and fellow royals to support Kate at her annual carol concert – in first appearance with the family since I’m a Celeb

Mike Tindall appeared in high spirits tonight as he joined his wife Zara for the his first appearance with the royal family since his I’m A Celebrity stint.

Princess Anne’s son-in-law, 44,  looked smart in a navy suit with a red tie, while his wife donned a maroon coat for the occasion.

Today’s appearance marked Mike and Zara’s first with other members of The Firm since they returned from Australia following Mike’s reality TV stint.

Senior members of the Royal Family headed to the central London church to support Kate’s Together at Christmas concert as the Duke and Duchess of Sussex ramped up their war with them and the British media. 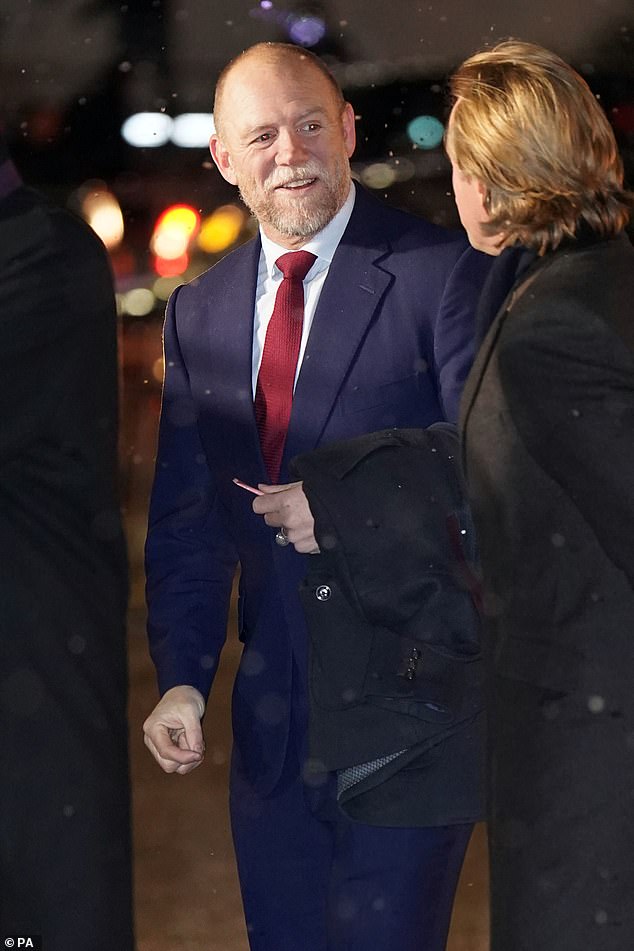 Sophie, the Countess of Wessex, arrived soon after Kate and was soon joined by Princess Eugenie and Beatrice, who were their husbands.

Eugenie was seen in the sixth episode of Harry and Meghan’s Netflix series, visiting the family at their home in Montecito, California.

Also present is Prince Michael of Kent and his wife Princess Michael. She hit the headlines last week when Netflix revisited the moment she wore a Blackamoor brooch to a Christmas lunch that was attended by Meghan in 2017.

Last week, Mike cosied up to Prince Harry’s rumoured former flame – just a day after the first part of the Sussexes’ bombshell documentary was released – as he and wife Zara dropped in at Cheltenham. 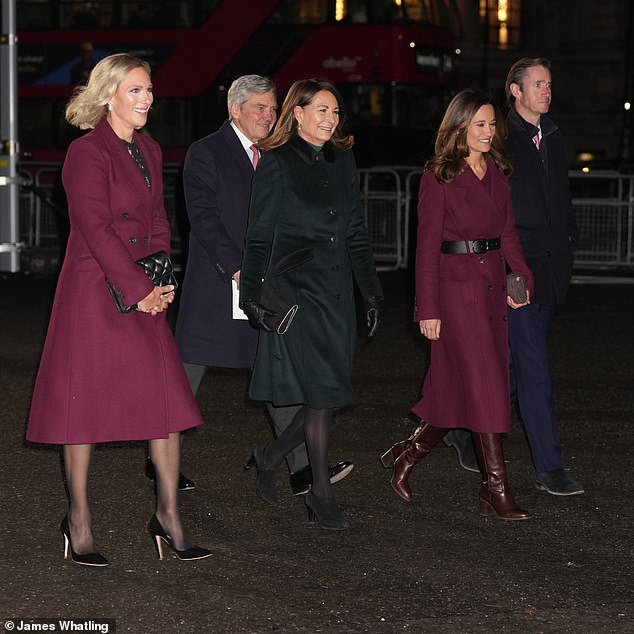 Mike  looked ready for a day at the races in a flat cap and a beige blazer, worn over a matching waistcoat, as he posed for friendly snap with the sports reporter, 45.

The mother-of-two had sparked rumours of a liaison with the Duke of Sussex, 38, in 2006, after pictures surfaced of the pair and a source reported at the time that Harry was ‘absolutely infatuated with’ her.

However the relationship never blossomed further, and Natalie went on to marry her now husband, TV executive Owain Walbyoff.

Natalie was all smiles as she enjoyed the racecourse with the royal couple, following Netflix’s dramatic drop of Harry and Meghan’s docuseries, which has by many been percevied as an attack on the The Firm and the British press. 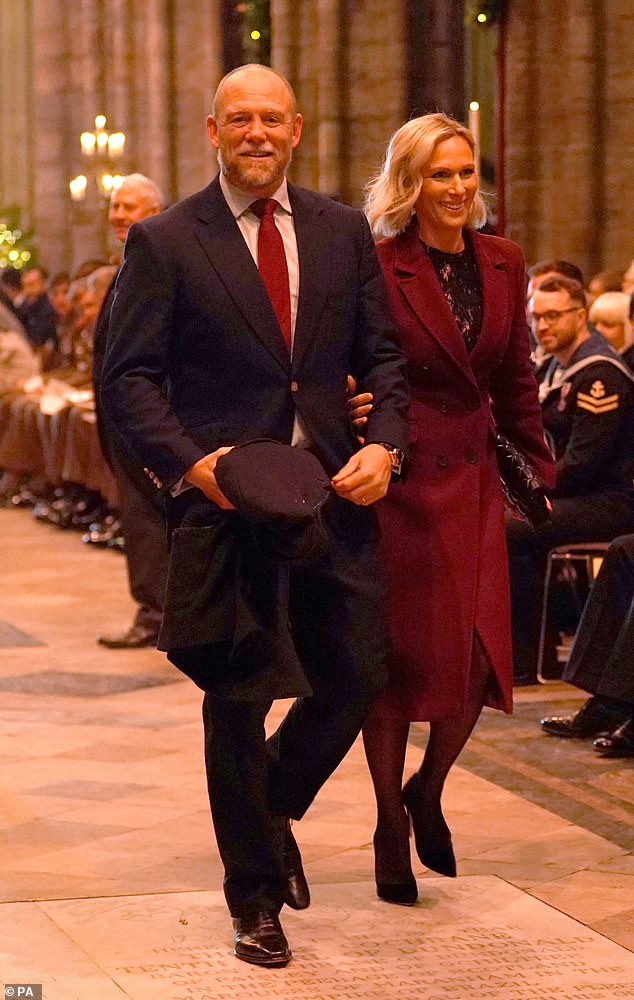 While Mike was dressed in a smart navy suit, Princess Anne’s daughter Zara opted for a burgundy coat 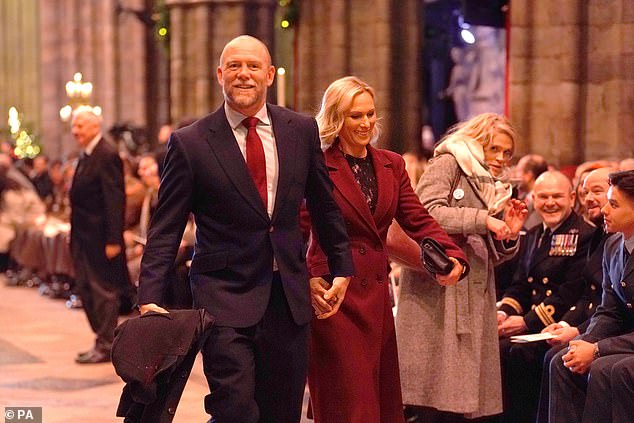 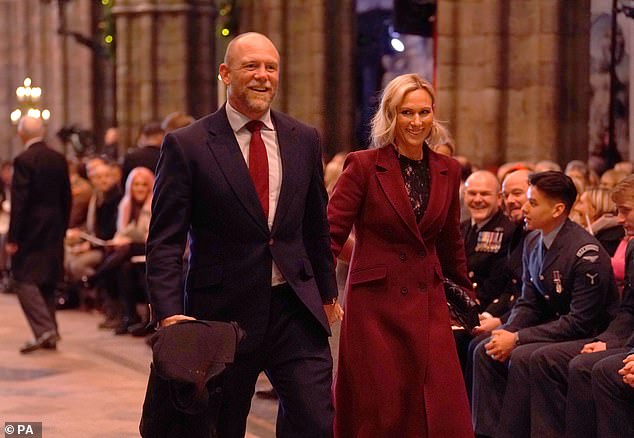 The royal couple appeared in high spirits during the outing, which is their first with the family since Mike’s return from I’m A Celebrity

Meanwhile Mike had earlier revealed on his Instagram how he and his eldest daughter Mia had enjoyed a morning of ‘sushi and nails’ together, where he displayed their matching blue manicures.

He brandished bright Tiffany blue painted nails – the perfect shade to match his tie – as a loved up Zara laughed in photos next to her husband, looking effortlessly elegant in a velvet Guinea coat with silver buttons.

The pair were also pictured with Dolly Maude and Natalie sporting similar hats. 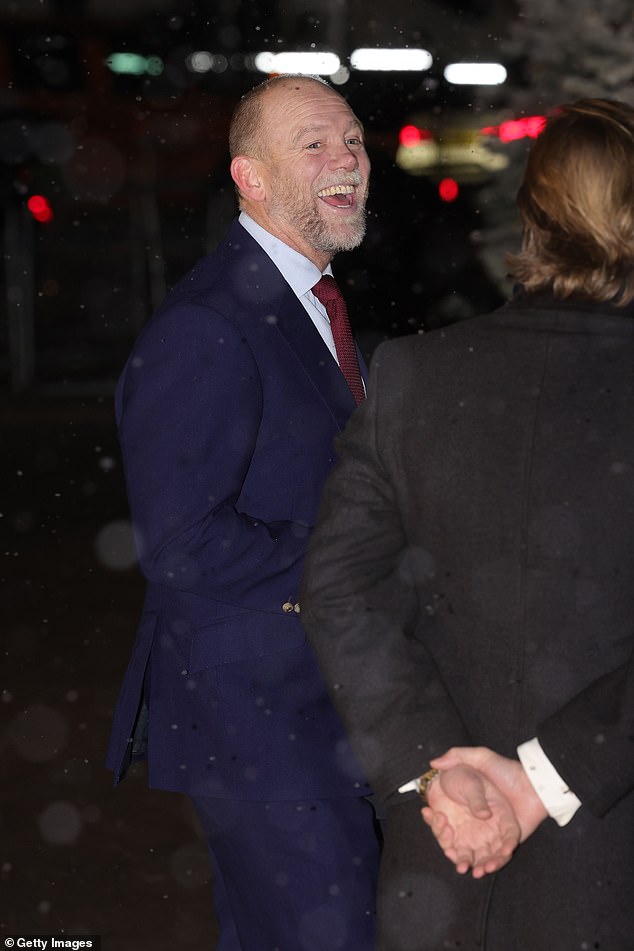 Outside the church, Mike could be seen having a laugh with another member of the royal family as they arrived

Zara also smiled in another group snap, shared by ITV Sports presenter Ed Chamberlin, who was also posing with the couple, alongside professional rider Ap McCoy.

The outing comes following a morning filled with doting dad duties for Mike, who took to Instagram to share an adorable snap with his daughter.

Posting on his stories, the I’m A Celeb fan-favorite brandished colourful nails painted bright teal, courtesy of his eight-year-old.

Meanwhile Mia sported a matching manincure with a metallic blue coat, placing her tiny hand next to her father’s for comparison.

Mia has two siblings – Lena, four and Lucas, one.

Her husband, Mike, who came third on the popular ITV show, looked dapper in a velvet dinner jacket and bow tie, paired with a white shirt and black tailored trousers.

The pair had been holidaying in Australia since the reality TV show came to an end last month.

Mike has shared snaps of their fun-filled vacation, which included a trip to the VALO Adelaide 500 track.

In one pictured the royal couple shared a tender moment as Mike appeared to lean in to kiss his wife’s cheek, at a restaurant.

The father-of-three caption the shots: ‘Great day yesterday started down at the @adelaide500 track with @markberetta then on to the @starofgreece for lunch before heading to @darenbergwine for a little tasting.

‘Then on to a state dinner that was wrapped up by @icehouseband #goodday #southaustralia.’

Earlier that week Zara joined her husband at the Adelaide 500, which is part of the 2022 Supercars Championship Season, at Adelaide Parklands Circuit.

Meghan describes the King as ‘very charming’, saying he reassured her as they walked down the aisle together on her wedding day – after she told him: ‘I’ve lost my dad in this’

Harry and Meghan Netflix documentary LIVE: Buckingham Palace refuse to comment on latest bombshells as Princess of Wales arrives at Westminster Abbey for carol service… and it’s business as usual for King Charles