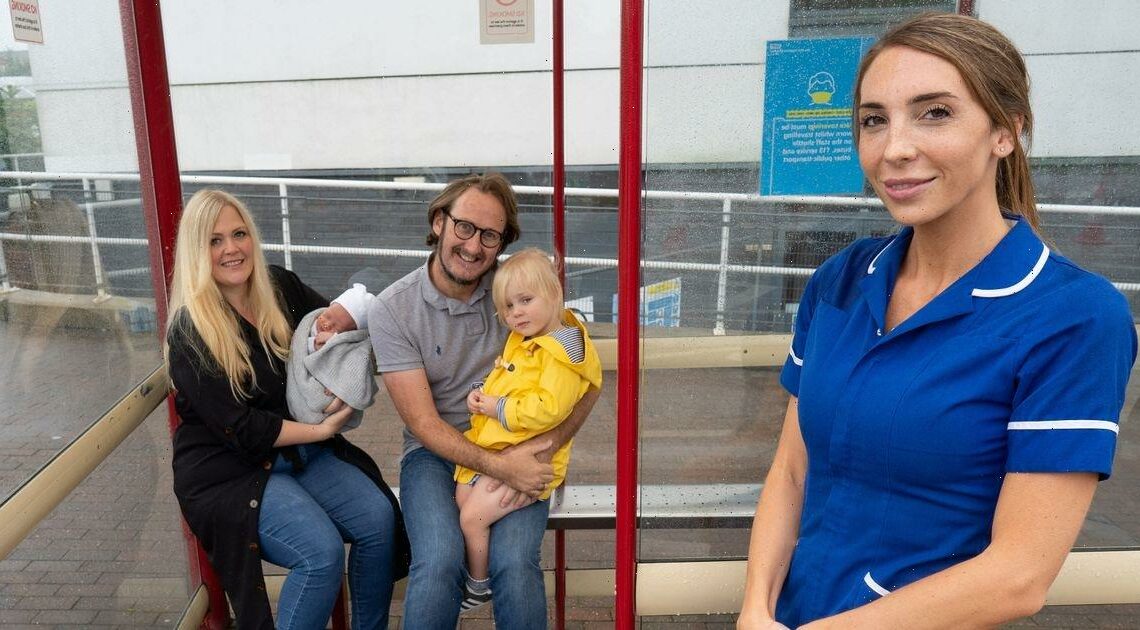 A midwife on her way to work recently went above and beyond after bumping into a woman in labour at a bus stop.

Saskia Bulmer, 30, from Wakefield, was heading to Pinderfields Hospital to start her shift when she came across a lady whose waters had broken as she got off the bus.

The mum had been on her way to hospital with her husband, Phillip, 42, when Becky’s labour progressed rapidly.

The mum was in so much pain trying to get from the bus to the Labour & Delivery ward that they couldn’t get further than the bus stop.

So, Saskia helped bring Barnaby Andrew into the world at 7.05am.

The little boy weighed 8lb and was quickly helped to the maternity unit alongside his parents and was placed under a heat lamp.

Saskia, a mum-of-one, said: “It was a lovely start to the day. It’s something I’ll always remember, every time I drive by the bus station I’ll think of.”

While the grateful Andrews’ family said her arrival was like “something out of a movie”.

Becky noted: “Someone went running into the hospital to get a nurse, but when the midwife stepped off the bus all I thought was ‘hallelujah’.

“Her turning up was like something out of a movie.

“When I saw her running towards us and when she told us she was a midwife we were just filled with relief. Just complete relief.

“It was all so exciting, and when I could finally hold Barnaby and hear him breathing, I just felt so overwhelmed with joy.”

The new mum said that she realised she wouldn’t make it to the hospital and was preparing to give birth on a patch of grass when she spotted her “saviour”.

Becky, her husband, and little Barnaby were all “completely healthy” after the birth and were sent home by 1.30pm that day.

Becky, a primary school teacher, said: “We were meant to go to the races that afternoon, so it wasn’t how we expected our day to go.

“But now we’re just so grateful for how everything went.

“We couldn’t thank Saskia and all of the staff enough as they went above and beyond to make sure Barnaby could come home safe and sound.”

Dad, Phil, added that he tried to be calm and brave during the ordeal but realised Barnaby would arrive at the bus stop when he saw the baby crowning.

Phil said: “I kept telling her it was going to be fine.

“We got to the bus stop, just 100 yards from the entrance and she stopped and said he’s definitely coming

“I looked down and I saw the top of his head. It was absolutely bonkers.

“That was the moment I think I went white, realising he was coming and we were not going to make it.”

Phil said he will try to get ‘bus stop outside Pinderfields's Hospital’ on Barnaby’s birth certificate as he's currently referred to as born before arrival.

He added: “This is a brilliant story we will always tell Barnaby. Every time we go by the hospital we will point out the exact spot at the bus stop where he was born.”

US travel ban may be lifted for double-jabbed tourists, Biden reveals
World News