Home » Lifestyle » Michel Roux, Whose Vodka Success Was Absolut, Is Dead at 78 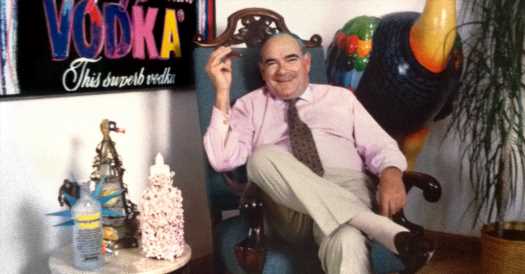 Michel Roux, Whose Vodka Success Was Absolut, Is Dead at 78

Michel Roux, a French-born liquor executive who used a distinctive and witty advertising campaign to turn Absolut, a little-known Swedish brand, into the top imported vodka in the United States, died on April 30 at his home in Palm Coast, Fla. He was 78.

His death was confirmed by Jen Dillon, a family spokeswoman, who said the cause appeared to have been cardiac arrest.

The Absolut campaign, appearing largely in upscale magazines, started in 1980 when Mr. Roux was the No. 2 executive at Carillon Importers, which marketed and distributed Absolut in America.

Conceived by the agency TBWA, the ads imbued Absolut with a sophisticated image. “I want to make a fashionable business out of the booze-peddler business,” Mr. Roux told W magazine in 1988.

TBWA used Absolut’s squat, transparent bottle as its muse, with ads like “Absolut Heaven,” which pictured the bottle with angel’s wings, and “Absolut Perfection,” which placed it under a halo.

The bottle served as model, adorned with decorations and garb, to describe states of mind like optimism, generosity, elegance and anticipation. The bottle’s shape was depicted in myriad creative ways, appearing as if carved into a computer chip (Absolut Intelligence), Central Park (Absolut Manhattan) and a golf course (Absolut 19th).

Mr. Roux, who became Carillon’s president in 1982, added to the campaign by commissioning Andy Warhol, Keith Haring, Kenny Scharf, Ed Ruscha and many other artists and photographers to reimagine the bottle in a long-running series of ads. Kurt Vonnegut drew himself playing with string — a nod to his novel “Cat’s Cradle” — with the bottle’s spout turned into a cat’s head. 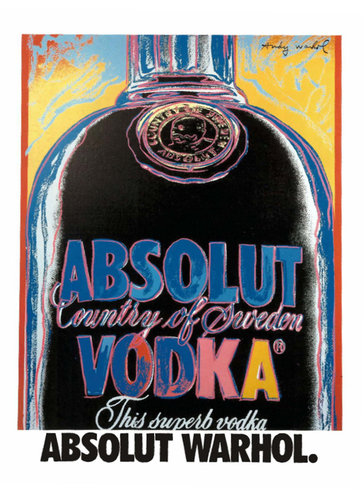 “I knew Andy Warhol very well,” Mr. Roux said in an interview with Chilled, a magazine about beer, wine and spirits. “He was a teetotaler; he didn’t drink. He made me believe he was using Absolut as a perfume.”

“Michel pushed us on that,” Mr. Lewis said in a telephone interview. “The agency was against because it wasn’t their idea, but more so because the brand was doing well, and they didn’t want to splinter the existing campaign. They weren’t ready to use an artistically driven bottle.”

Ultimately, Mr. Lewis said, the artist-created ads accelerated the campaign by attracting other artists, as well as Hollywood stars and others among the rich and famous, as Absolut consumers.

Mr. Lewis wrote a book about the campaign, “Absolut Book,” published in 1996.

“He was a very demanding fellow who loved anybody who had an idea,” William Tragos, a founder and former chairman and chief executive of TBWA, said of Mr. Roux in an interview. “So to our creative people he was an encourager. But at the same time, he was able to say, ‘That’s not good enough.’ ”

Mr. Roux used Absolut advertising as early as 1981 to court gay and lesbian consumers, believing they were trendsetters. In 1992, Carillon sponsored a 16-page portfolio of works by gay and lesbian artists in the gay periodical The Advocate. It included images of same-sex marriage, a gay-pride parade and the 1969 Stonewall uprising.

Absolut became a corporate sponsor of the Gay & Lesbian Alliance Against Defamation in 1989.

The brand overtook Stolichnaya as the No. 1 imported vodka in 1985, and held that rank until 2015, when Svedka, another Swedish product, overtook it, according to Impact Databank, which tracks trends in the alcoholic beverage industry as the research unit of M. Shanken Communications.

Despite his success, though, Mr. Roux had to surrender his rights to market and distribute Absolut in 1994. Vin & Spirit AB, which produces Absolut, shifted its import rights in the United States from Carillon to the Seagram Spirits and Wine Group.

“It’s a child I gave birth to and nourished properly to teen age,” Mr. Roux told The New York Times in 1993, when the change was announced. “I hope they don’t screw it up.”

A few months later, Carillon acquired the rights to sell Stolichnaya, then the No. 2 import — an unexpectedly happy turn of events for Mr. Roux. 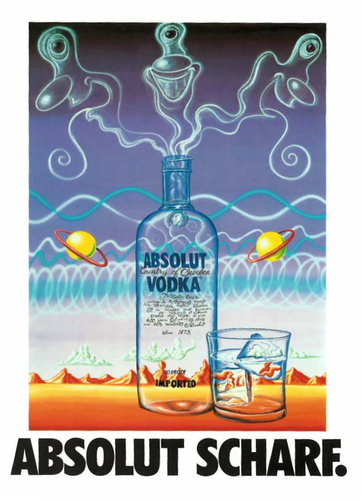 “I think we can make a big brand out of Stoli,” he told The Times, “maybe as big as Absolut someday, without damaging Absolut.”

The Absolut campaign that was essential to Mr. Roux’s career continued until 2006.

Michel Pierre Roux (pronounced roo) was born on Aug. 31, 1940, in Soyaux, France, to Emmanuel and Louisette (Lecocq) Roux. After graduating from the University of Strasbourg with a degree in hotel management and serving as a paratrooper in the French Army, he emigrated to the United States in 1964 with the help of a family from Texas, who sponsored him.

He started as a dishwasher at the Rice Hotel in Houston and moved quickly into a job at the reception desk. He left Houston for a job as an assistant manager at a hotel in Rockport, Tex., before opening his own French bistros in Corpus Christi and Dallas.

In 1970 he became Carillon’s only salesman, peddling Grand Marnier and other products nationwide.

Mr. Roux’s success with Absolut overwhelmed his work with other brands at Carillon. In addition to helping make Grand Marnier more popular, he introduced Bombay Sapphire, an offshoot of Bombay Dry Gin, with a distinctive blue bottle inspired by the Star of Bombay sapphire. Bombay Sapphire became the world’s second-largest gin brand.

Mr. Roux left Carillon in 1998 and the next year founded a similar company, Crillon Importers. He was its chairman and chief executive at his death.

He is survived by his wife, Kathleen (Hazlett) Roux, known as Kitty, and his sons, Dominique and Maximilien.

One of Mr. Roux’s signature spirits at Crillon was absinthe, the anise-flavored spirit known for its popularity among 19th-century artists like van Gogh and Toulouse-Lautrec. It was banned by the United States in 1912 amid concerns that wormwood, one if its ingredients, which contained thujone, caused hallucinations.

In 2000 Mr. Roux introduced a legal absinthe, Absente, which used a sister botanical, Southern wormwood, with only trace amounts of thujone.

“People who drink Absente have said they’ve waited for the hallucination,” Mr. Roux said with a laugh during an interview with The Detroit Free Press in 2000. “But you would have to wait a long time with our product.”

After the government approved the use of wormwood in absinthe in 2007 — with limits on the amount of thujone — Crillon reformulated its absinthe products. And in 2010 it introduced one called Michel P. Roux Supreme Absinthe, with a picture of Mr. Roux on the label.