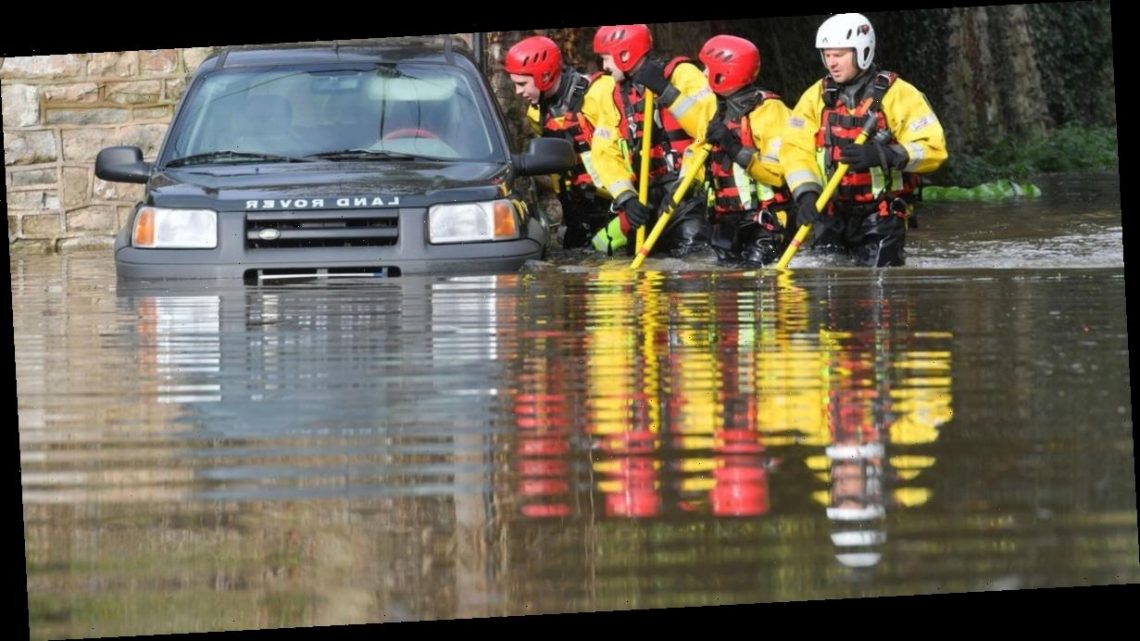 The Met Office has issued an amber 'danger to life' flood alert, warning that up to 100mm of rain may fall in eight hours.

The mammoth downpour means certain parts of north and north-west England could see nearly a month's worth of rain today and tomorrow.

The amber weather warning covers an area stretching from Manchester to Sheffield and will be in force between 7am today and 3am tomorrow.

Another alert, set to last from 6am today to the same time tomorrow, has been issued for the surrounding area.

A yellow rain warning is also in place for north Wales and English border towns today, with forecasters expecting the worst of the weather between 9am and midnight.

The amber weather warning for the north-west states: "Persistent, heavy rain will affect the area during Thursday and much of Thursday night, before slowly dying out on Friday morning.

"(The rain) will be heavy in places, particularly over the higher ground.

"We are talking about the north Moors, the Pennines, the Peak District, Snowdonia, significant spells of rains here.

"Large accumulations building up over the course of Thursday and Thursday night."

It also says there is a 'good chance' of communities being cut off by floodwater.

The other two warnings also raise the prospect of Brits being left stranded at home by the flooding.

The chances of 'danger to life' flooding in these areas is lower, although still possible.

Up to 70mm of rain could hit the hilly areas of north Wales.

The yellow weather warning covering north-east England predicts up to 80mm of rain on higher ground.

The average total rainfall for November in the UK is 121mm.

The Environment Agency has issued one flood warning and 37 less serious flood alerts.

Rain across northern England and north Wales, will be heavy at times with a risk of flooding. Brighter elsewhere but with showers, heavy near coasts. Windy in places coastal gales in parts of southwest and northeast England. Feeling cold.

Rain gradually easing across northern England and north Wales. Clearer skies in south with areas of mist and fog developing by dawn. Cold and frosty in Scotland and Northern Ireland.

Rain slowly clearing away south, with mist and fog slow to clear. Drier and brighter elsewhere with sunny spells during the afternoon.

Outlook for Saturday to Monday:

Cold with patchy fog early Saturday before rain, with hill snow in the north, spreads east, clearing south through Sunday. Showers follow, ahead of further rain and hill snow Monday.

In these trying times, I’m finally happy to admit I’m a hippie