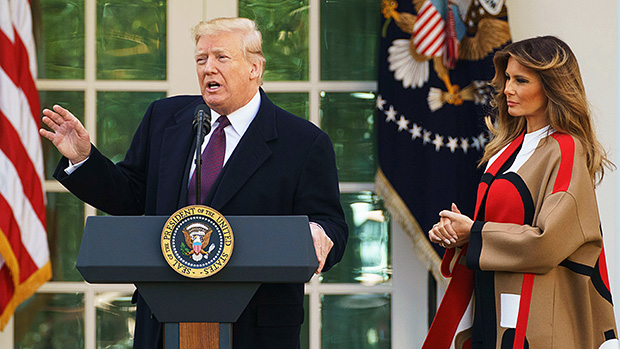 Melania Trump will be proudly looking on while husband Donald Trump delivers his State of the Union address. We’ve got details on how she’s been helping him prepare for it.

Melania Trump is very much looking forward to watching husband Donald Trump, 72, enthrall members of the House, Senate, SCOTUS and viewers at home with a moving State of the Union address on Feb 5. The first lady had been helping the president with his speech and knows he will absolutely nail it. “Melania is not nervous at all for Donald’s upcoming big speech, she is looking forward to it. She is confident Donald will deliver a powerful and unifying State of the Union Address. She feels he is going to do well and Melania has been supporting Donald the last several days as he prepares,” a source close to the 48-year-old first lady tells HollywoodLife.com EXCLUSIVELY.

“She has been listening to his ideas for the speech, and sharing her own feedback and thoughts on his big moment. She is eager to watch him deliver his important address to the world and will be listening closely,” our insider adds. The speech has been pushed back to Feb. 5 as the original date in January came during the federal government shutdown over Trump’s border wall funding demands. House Speaker Nancy Pelosi, 78, said on Jan. 23 that he would not be welcome to give his address in the chamber until the crisis was resolved. Trump relented and ended the shutdown two days later on Jan. 25 after government employees went 35 days without paychecks.

Unlike his 2017 speech, Trump will be facing a House of Representatives with the highest number of females ever, as a record 95 women won their seats in the 2018 mid-term elections. He will also have arch-enemy Nancy sitting right behind him for the entire address alongside Vice President Mike Pence, as the Democrats took back the House from Republicans in the mid-terms. It should definitely make for some interesting viewing, although Nancy’s so professional don’t expect any obvious eye rolls from her. She’ll likely politely applaud the president on topics she agrees with and keep her hands down when he mentions policy she is against. Also, Democratic congresswomen will be wearing white in support of the suffragette movement and women’s rights. That should be quite a wake up for Trump about strength in numbers.

Woman claims to discover ‘sharp hook’ sticking out of a tampon

Millions are on the move in China, and Big Data is watching
World News