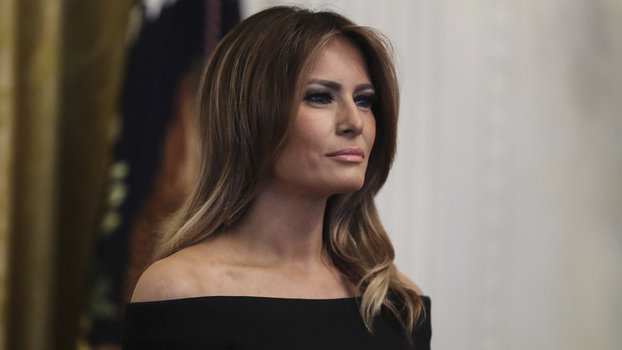 In a new interview this week, First Lady Melania Trump criticized comedians, journalists, performers and authors, claiming — without examples — that they take advantage of the Trump name.

When Fox News’ Sean Hannity asked her on Wednesday about the hardest part of her role, Mrs. Trump, 48, pointed her finger at “opportunists.”

“I would say the opportunists who are using my name or my family name to advance themselves, from comedians to journalists to performers, book writers,” she replied.

“Does it hurt?” Hannity asked aboard the U.S.S George H.W. Bush.

“It doesn’t hurt,” Mrs. Trump, who spent the day meeting military families, said. “The problem is they’re writing the history and it’s not correct.”

In February 2017, Mrs. Trump received criticism for what was also perceived by some as opportunism when her lawyer said in her libel lawsuit against Mail Media, the owner of the Daily Mail, that the first lady had a “once-in-a-lifetime opportunity … [for] multi-million dollar business relationships.”

Hannity also brought up the “speculation about you and your family and your marriage.” Multiple women have alleged that her husband, President Donald Trump, has had affairs during his marriage, which he has repeatedly denied.

On Wednesday, Trump’s ex-lawyer Michael Cohen was sentenced to three years in prison, in part for his role in arranging payments to adult film star Stormy Daniels and former Playboy model Karen McDougal to keep quiet about their claims of extramarital relationships with the president.

“They like to focus on the gossip,” Mrs. Trump — who said that she and the president, 72, “had great chemistry from day one” — said of her critics. “And I would like to they focus on the substance and what we do, not just about nonsense.”

Earlier this year, she similarly told ABC News that Trump’s alleged affairs are “not concern and focus of mine.”

Of her role, Mrs. Trump insisted to Hannity that “I do what I think is right.”

RELATED: Melania Trump Is Blonde Now and People Have Thoughts

“I know I will get the criticism from the public or from the media but I will do what is right and what I feel is right for the country and for the people,” she said in the Wednesday interview. “That’s what I say: I want to say true to myself and listen myself and what to do and what is right, what is wrong, and lead meaningful life every day.”

Hannity questioned whether Mrs. Trump would like to see her husband win a second term.

“I think my husband, he’s doing an incredible job,” she responded. “The country does best ever. So yes, I want that the country continue to do well.”

This article originally appeared on People. For more stories like this, visit people.com.