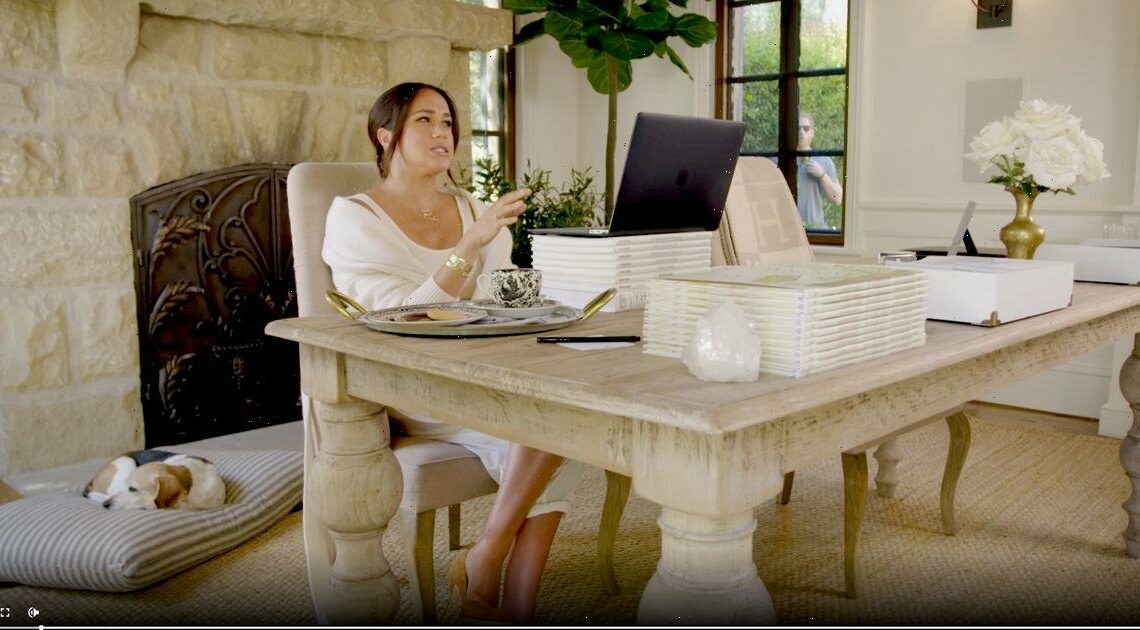 Meghan Markle has given a rare glimpse inside the home office at her Californian mansion in a video to celebrate her 40th birthday.

The Duchess of Sussex starred alongside Bridesmaids actress Melissa McCarthy in the clip, shared on the Archewell website, as she revealed her plans to ask 40 friends to donate 40 minutes of their time to help mentor women going back into the workforce.

Megan was seen chatting on Zoom via her charcoal Apple MacBook as she discussed her upcoming milestone birthday with Melissa.

The footage also gave a viewers a detailed insight into the study at the couple's sprawling Montecito mansion which is rumoured to have cost Harry and Meghan $14.65 million, £10.5 million, in August 2020.

Meghan has a huge oak desk in the centre of the room with two plush cream dining chairs placed in front of a grand stone fireplace. However it appears that the traditional feature is not in use as it has been fitted with two beautiful iron gates.

The Duchess has opted for a neutral colour palette and has accessorised her desk with a stack of her children's book, The Bench, and has balanced her Apple MacBook on a pile of white hardbacks.

Meghan, who shares children Archie Harrison and Lilibet Diana Mountbatten-Windsor with Harry, has draped an elegant £1,240 Hermes throw over a dining chair which is printed with the letter 'H'.

The former Suits star has also propped a large clear quartz crystal against her copies of The Bench. The crystal is believed to aid concentration and memory and is regarded as the 'master healer'.

Despite the couple re-locating to America, Meghan gave a nod to the British tradition of tea and biscuits with a cup and saucer alongside a sweet treat on a matching side plate.

Meghan sipped from her delicate Burleigh Black Regal Peacock collection teacup which is hand-crafted at Middleport Pottery, based in Stoke-on-Trent.

The pretty three-piece collection, which consists of the teacup, saucer and side plate, is decorated with an ornate bird design and is priced at £57.

The royal also has a glass water bottle on her desk to stay hydrated and has a collection of family pictures near her laptop.

Meghan has a large photo along with three black-and-white snaps in a connecting silver frame with one picture appearing to show Prince Harry kissing a newborn baby on the head.

The couple have opted for a coarse, natural carpet in the gorgeous study and have positioned a large fig tree next to the large window which floods the room with natural light.

Meanwhile the fig tree is also the perfect plant for the study as it is said to inspire creative energy while it also represents a woman's womb.

Elsewhere, the couple's beloved rescue beagle was seen snoozing on a plush grey-striped dog bed in the background of the video.

The beagle, named Guy, was seen peacefully sleeping at the start of the video before he woke up and looked towards the camera.

We can also see a large grey dog bowl on the fireplace and a unique oak lamp to add a warm glow over the office space.