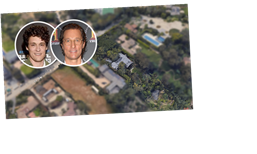 Though the house was never publicly offered for sale, public records reveal Matthew McConaughey and wife Camila Alves McConaughey have sold their longtime Malibu home for the princely sum of nearly $14.8 million. The deal closed in mid-July, and the spendy buyer is Oscar-winning film director-writer-animator-producer Phil Lord (“Cloudy With a Chance of Meatballs,” “The Lego Movie,” “21 Jump Street”).

McConaughey acquired the landlocked Point Dume estate way back in 2007 for just over $10 million, according to previous reports, later massaging it in the form of an extensive remodel. While most of the property’s current specifications are unknown, tax records say the 1.05-acre lot includes a house with four bedrooms and three bathrooms in 3,800 square feet, though it’s not clear if those numbers remain accurate. Aerial imagery confirms the deep and heavily-wooded lot is secured by towering walls and gates, and includes a theatrically long driveway that meanders back to the house, set far back from the public road out front.

The property also transferred with one of Malibu’s most coveted amenities — a private beach key with access to gated Little Dume Beach, the all-but-private celebrity getaway that lies below the nearly sheer cliffs of the Point Dume neighborhood.

McConaughey, 50, doesn’t appear to be leaving Malibu altogether — he continues to maintain a fleet of Airstream trailers that he uses for everything from his (temporary) digs to his L.A. offices. The “Dallas Buyers Club” star additionally owns a 10,000 sq. ft. mansion in his longtime home base of Austin, Texas.

It isn’t particularly surprising that 45-year-old Lord, for his part, would be in the market for an expensive piece of real estate. Last year, the Miami native and his filmmaking partner Chris Miller inked a “massive” deal with Sony Pictures believed to be worth somewhere north of $100 million through their Lord Miller Productions company. The pair won an Academy Award for 2018’s “Spider-Man: Into the Spiderverse,” which they produced, and their other films have grossed more than $3.3 billion at the worldwide box office, though they were infamously and unceremoniously fired by Lucasfilm from the production of “Solo: A Star Wars Story” in 2017.

Lord’s current residence is a three-story house set directly on the Venice canals in Venice, Los Angeles. According to records, that vibrant $3 million property — which has been photographed for the likes of Elle Decor and the New York Times — is owned solely by his girlfriend of 14 years, successful jewelry designer Irene Neuwirth.