Ramona Singer displayed decidedly less-than-royal manners at the opening night of “Diana, the Musical” on Broadway on Wednesday night.

A spy exclusively told Page Six that the “Real Housewives of New York City,” star, 65, waltzed into the Longacre Theatre and took her seat in the very first row with a drink in hand. She then placed her drink on the stage like she was at a bar instead of a Broadway theater.

A flabbergasted usher told Singer that drinks weren’t allowed on the stage, to which she reluctantly took it off — only to put it back on.

The inconsiderate behavior didn’t end there, though. Broadway requires all theatergoers to wear masks inside due to COVID-19, but the Bravolebrity seemed to believe the rules didn’t apply to her.

Gossip columnist Rob Shuter snapped a pic of Singer seated maskless right next to an usher who held up a sign reading “MASK UP” with a picture of a mask. Singer eventually put on her mask, but not before “rolling her eyes,” according to Shuter.

The “4 Word Answer” author, 48, noted that most people had straws in their drinks so they could sip while wearing a mask — but not Singer. She had no straw, which gave her an excuse to remove her mask each time she wanted to imbibe. 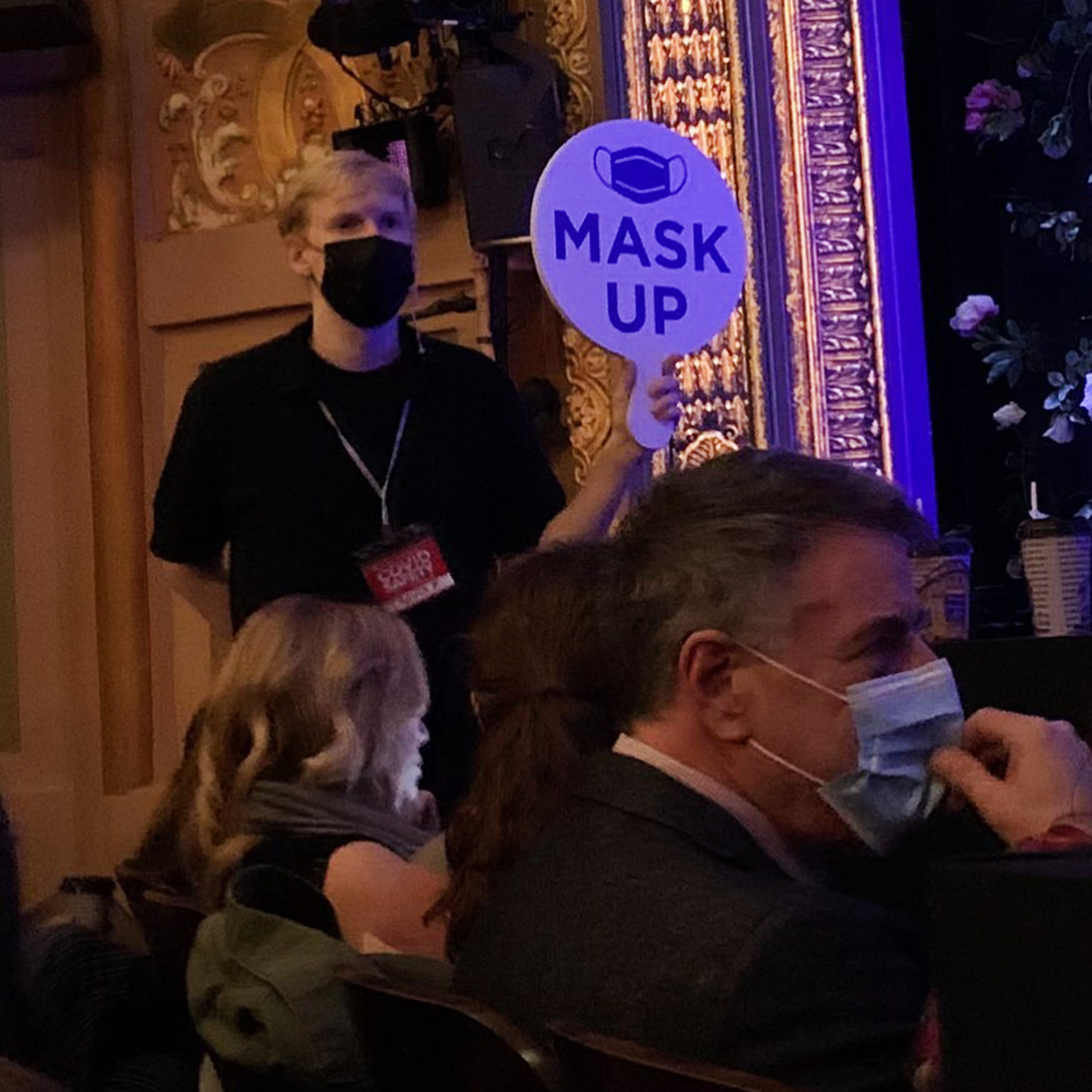 The reality star’s loutish behavior continued during the intermission when she donned her fur coat and sashayed out to get another drink from the bar. She didn’t return to her seat until after the first song in the second act, no doubt being an unwelcome distraction to the cast as she was seated so close to the stage.

When reached for comment on Thursday morning, a rep for Singer insisted to Page Six that she had “adhered to all of the theater rules” during her night out.

“Ramona only took off her mask when she took a sip of her drink, which was allowed,” the rep said. “Numerous attendees had their drinks on the stage 30 minutes prior to the play starting, and once the announcement was made that drinks were not allowed on the ledge of the stage, everyone immediately removed.”

Singer’s rep added, “Ramona loved the play and thought it was an amazing night.”

Wednesday was not the first time the “Real Housewives Ultimate Girls Trip” star made clear her feelings on wearing masks to help prevent the spread of a deadly virus that has killed over 750,000 Americans.

Earlier this month, she endorsed a video on social media that compared coronavirus vaccine mandates to living under a Nazi regime.

Other celebs at the Broadway musical’s opening night included Jon Bon Jovi, who came in support of his bandmate David Bryan, who wrote the show’s music. A spy said a sweet moment occurred when the rocker, 59, pulled out his phone and began videoing his pal, also 59, up on stage at the end of the performance.