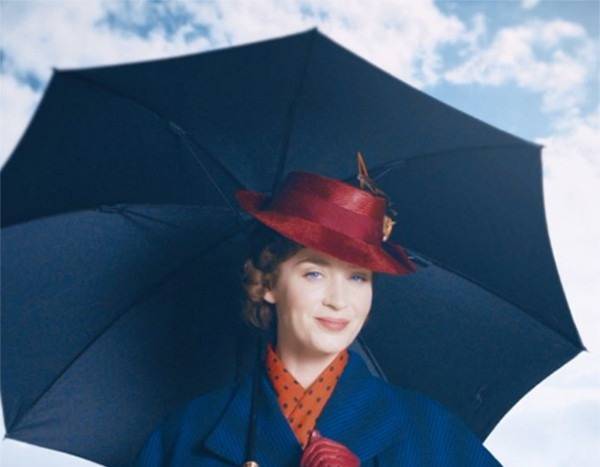 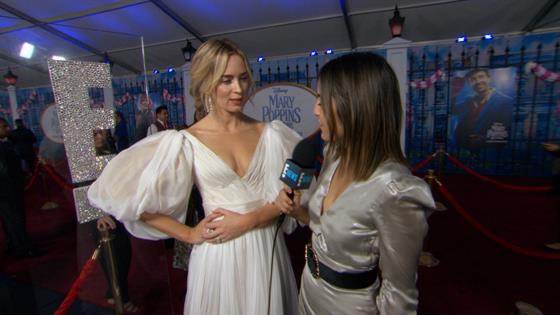 Mary Poppins is back! But does she win over the critics?

Emily Blunt takes on the role of the magical nanny in Mary Poppins Returns, Disney’s new sequel to its hit 1964 musical film—and is even nominated for a 2019 SAG Award for her performance. The new movie, also a musical, also stars Lin-Manuel Miranda, Ben Whishaw and Emily Mortimer, Meryl Streep and Colin Firth and also features none other than original actor Dick Van Dyke.

1. CNN’s Brian Lowry writes that Mary Poppins Returns “could just as easily be titled “Mary Poppins Remade. That’s not a bad thing, necessarily, but a movie that descends from the clouds with a huge gust of nostalgia behind it only sporadically conjures magic between the title character’s arrival and departure. The result is thus perfectly passable, but well short of practically perfect.”

“Mary Poppins Returns is well worth seeing,” he adds. “But the live-action movies pose a somewhat more complicated challenge, one that even the title character—with all the tricks up her sleeve—can’t entirely pull off.”

2. Collider’s Matt Goldberg gives the movie a score of C+.

“Probably the worst thing you can do before watching Mary Poppins Returns is to see the 1964’s Mary Poppins not just because it’s hard to compare to a film that has such a beloved reputation, but because you can see all the ways [director Rob] Marshall comes up short. His movie just doesn’t have the same level of imagination, and it certainly doesn’t have the songwriting chops (there’s not a song in Mary Poppins Returns that has the staying power of “A Spoonful of Sugar” or “Supercalifragilisticexpialidocious”).”

“That’s not to say that the original Mary Poppins is some untouchable gem, but rather that it appears Mary Poppins Returns didn’t even try to outdo the original in any respect,” he writes. “It’s content to stay in the shadow of its predecessor, and while it’s awfully cheery in that shadow, it feels destined to fade from memory almost as soon as the closing credits roll.” 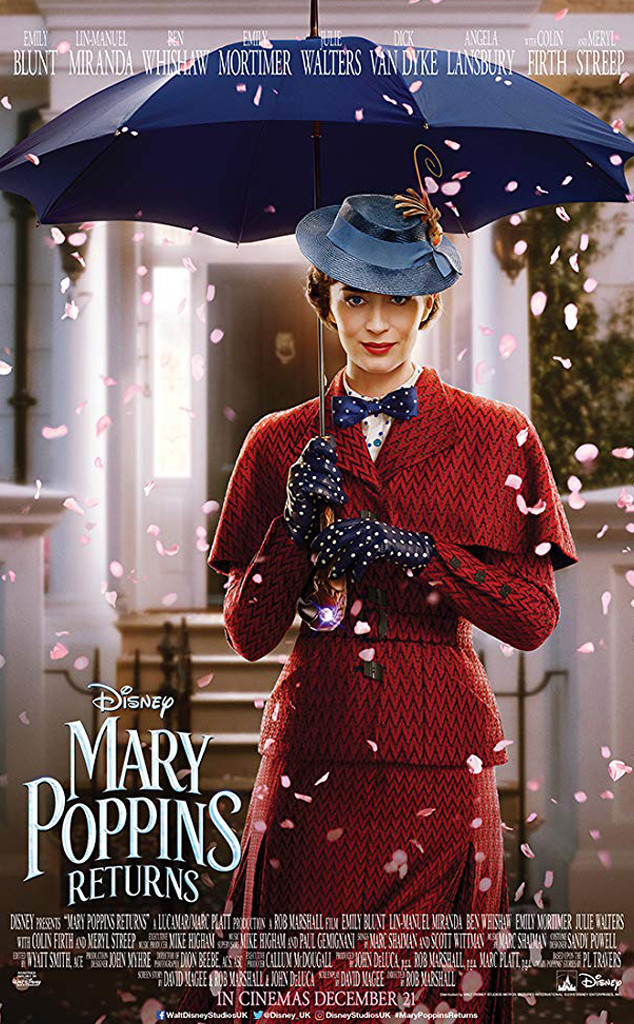 “A listless Sunday afternoon of a movie that bursts with forced whimsy and synthetic optimism from the first notes of “(Underneath the) Lovely London Sky” to the last twinkles of “Nowhere to Go but Up” (an admirably bold choice of song title for any film’s big closing number), Mary Poppins Returns isn’t dishonest so much as it’s out of its time, like a useless clock that’s happy to be five minutes off,” he writes.

“Almost worth the price of admission unto itself, the film’s standout sequence finds the whole gang diving inside a broken ceramic bowl, where they enter a cartoon circus that combines live-action with the traditional 2D animation for which the Mouse House was once famous. Employing over 70 animators who specialize in the dying technique, the 10-minute stretch is every bit as vital and alive with detail as the Disney classics of yore; it’s gorgeous stuff, and a bitter testament to the feeling that real art is something that Hollywood used to make, and now merely remembers at our expense,” he adds. “Mary Poppins may steel the Banks children for the future, but her perfunctory new adventure only leaves us wishing to return to the way things were.” 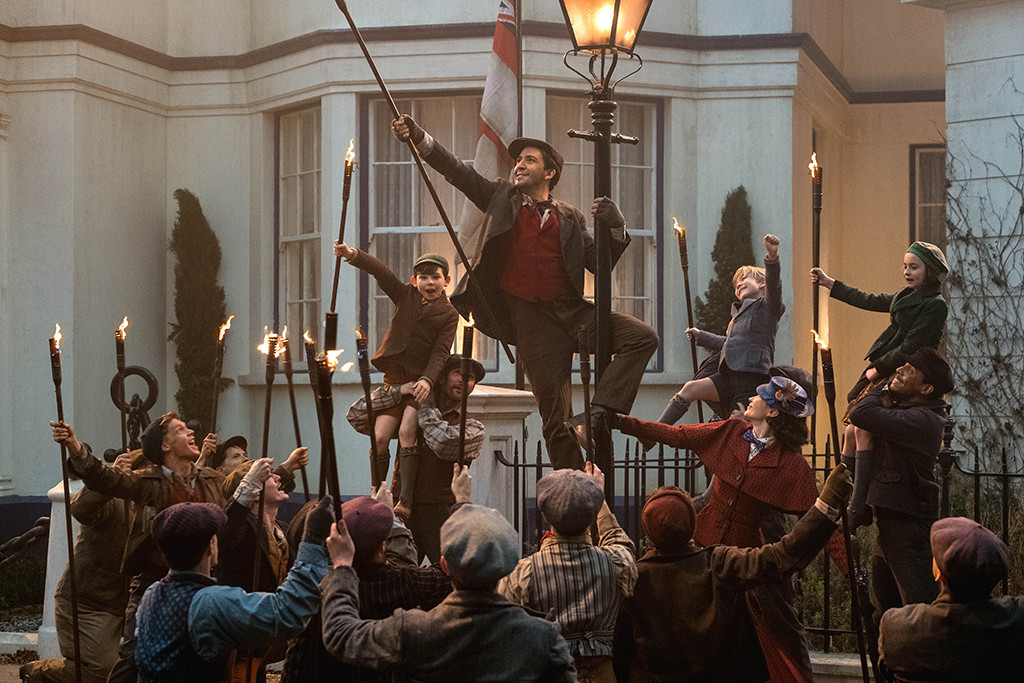 4. Schmoes Know’ Kristian Harloff and Mark Ellis give Mary Poppins Returns 4.4 and 3.75 out of five “Schmoes.”

“I really think that this is one of Emily Blunt’s best performances,” he continues. “Because she can do anything, she can do sci-fi, she can do thrillers, and she shows that she can do family musicals.”

“Emily Blunt, while she’s not gonna make me forget about Julie Andrews as Mary Poppins, I thought she did a great job stepping into those shoes,” Ellis adds. “She’s charming, she’s got a sarcastic sense of humor, Lin-Manuel Miranda was very enjoyable in this movie. I liked everybody that I saw and I liked Mary Poppins coming back.”

5. The New York Post‘s Johnny Oleksinski gives the film 3.5 out of four stars.

“This Poppins sequel has an entirely new score, with exactly none of the cherished songs from the classic Julie Andrews movie,” he writes. “Once you accept that, you can move on — and enjoy the countless other joys this follow-up has to offer. It will be a jollier holiday with Mary Poppins Returns.”

“Marc Shaiman and Scott Wittman‘s new songs pale in comparison to the original’s plucky exuberance and ageless melodies,” he adds. “But this heartfelt film is practically perfect in every other way.”

6. Slate’s Dana Stevens praises the casting, saying, “Every actor chosen to play a role already familiar from the original is practically perfect in every way, from Emily Blunt as the unfazeable nanny, to Emily Mortimer and Ben Whishaw as the adult versions of her former charges Jane and Michael Banks, to Julie Walters as Ellen the housekeeper.”

“The cast is spirited and charming, the evocation of 1930s-era London (some backgrounds were filmed on location, others created digitally) is playful and painterly, and the movie’s 130 minutes generally zip by, even if the closing song, in which the whole cast ascends to the sky clutching Angela Lansbury‘s magic balloons, never achieves the euphoric liftoff of ‘Let’s Go Fly a Kite,'” she writes. “This Mary Poppins may not be strictly necessary, but it’s more than sufficient.”