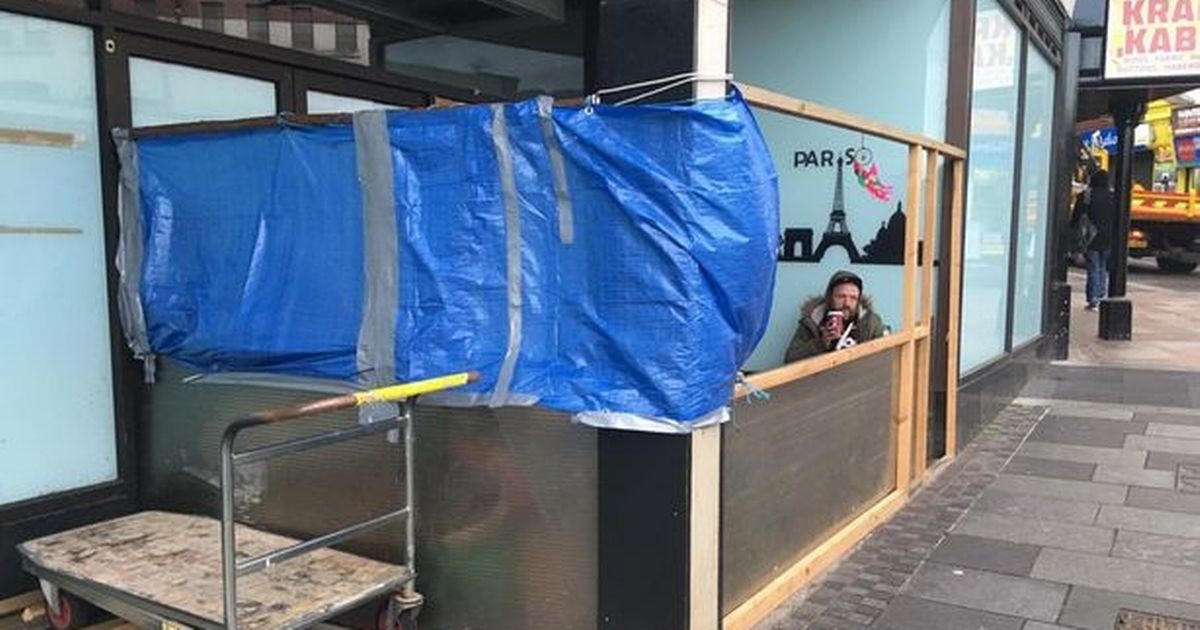 Marks & Spencer has evicted a homeless man who was living in a wooden shelter in front of one of the chain’s high street properties.

Craig Churchill was sleeping rough outside the entrance to the empty store in Pontypridd, South Wales, when he was told to immediately move on and threatened with legal action by the firm.

The 38-year-old said the shelter was built for him to protect him from the wind and rain while he slept outside in the cold.

But he was served with a notice saying he "trespassing" and Marks & Spencer had "lawful rights" to physically remove him and his belongings from the property on Taff Street, Wales Online reports.

The store on the town’s high street closed in 2015. Craig, originally from nearby Merthyr Tydfil, said: "It’s only been built in the last few weeks. This guy came down and built it for me. He’s from the Graig."

He said he’s been in Pontypridd for about half a year and he had been sleeping under a bridge by Treforest until he moved to the town centre and began sleeping outside the former M&S store.

He was given a legal notice on Wedesday morning, ordering him to leave the property immediately and take his belongings with him.

Craig has since left the site and his shelter has been dismantled and removed.

He donated some of his possessions, including blankets, to charity shops and hostels, and is still seen pulling a trolley containing the rest of his belongings.

He’s living in a B&B after receiving help from Rhondda Cynon Taf Council, but worries about its 11pm curfew.

He’s meant to be there for only two weeks until support accommodation becomes available.

A spokesperson for M&S said the firm worked with the council "over several months" to help find accommodation for Craig before the notice was issued.

Craig said he’s been homeless for parts of seven years after his marriage broke down and he and his partner separated.

He said he struggles with anxiety and depression, and he smokes cannabis and spice "to survive the cold".

He said: "I’m grieving. It knocks your feelings off. "I get up to litter pick the streets around 4.30am the next morning.

"I don’t smoke in the day. I have family and I believe it’s wrong.

"I know it’s wrong, but I wouldn’t use any worse drugs."

Craig said he’s received a lot of support from locals, who have given him food and supplies, and tried to find a home for him.

One shop owner gave him a waterproof jacket, a man who works in a nearby chicken takeaway shop brings him food, and he is invited into a fish and chip shop to eat and warm up.

He added: "People bring food and blankets and things like that. Ponty is a generous community and you get lots of people like this. "In Cardiff or Merthyr Tydfil I would just be a tramp on the street.

"My nan used to bring me here when I was a kid so I have a lot of memories here.

Craig said he used to sleep outside a charity shop, Hope Rescue, and would help out inside the store.

Hope Rescue manager Stuart Burnell said: "He litter picks all the time. He was going around on New Year’s Eve.

"Before he had his ‘little flat’, should we say, he would be outside the shop all day.

"When he was ill at the beginning of December I worried where he was for four days so I went and found a policeman to make sure he was OK.

"He calls one of the volunteers in here ‘Mam’.

"I’m going to miss him if he’s not here – especially when I have to put all the stuff out on my own."

Ahmed Ali, a worker at Milano Fish and Chips, said: "[Craig] is very nice to people. He doesn’t make any problems.

"He comes here and I give him food and keep him warm for half an hour."

A spokesperson for M&S said: "We recognise that homelessness is a complex issue and we are working with charities at both a national and local level to help fund practical measures to support those affected.

"In Pontypridd we worked with the council over several months to ensure the individual affected was offered accommodation prior to any notice being issued.”

A spokesman for Rhondda Cynon Taf Council added: “Council housing officers were present throughout and were able to provide advice and support to the individual.

“We understand the public’s continued concern for the individual, and can confirm the individual has accepted emergency accommodation while a permanent housing solution is secured."

The sad story behind Jeff Bezos and his biological father