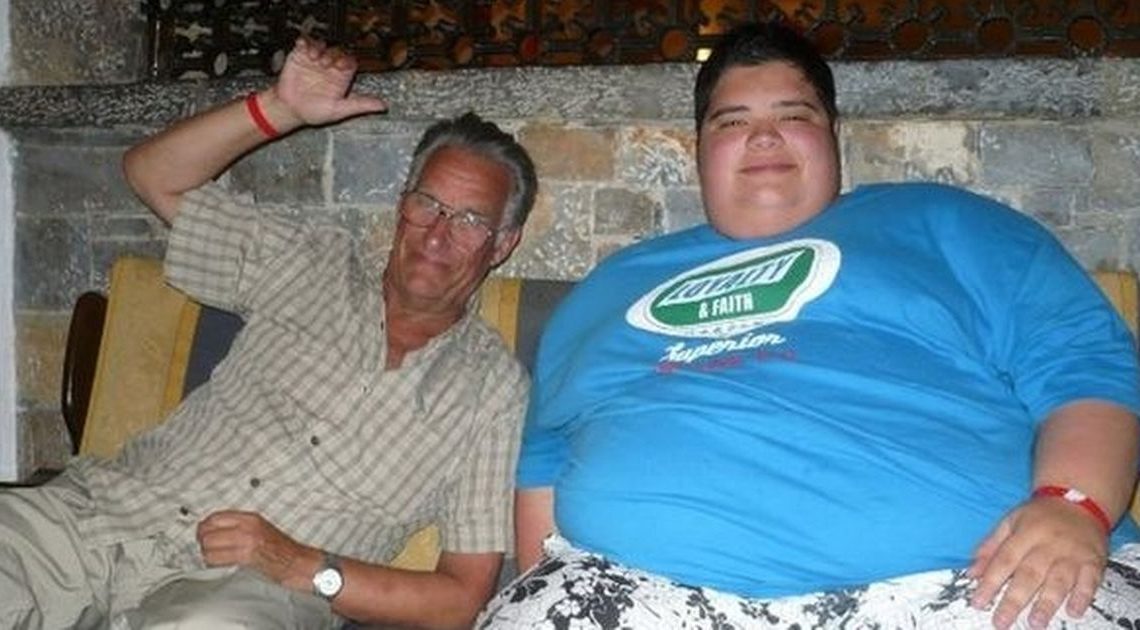 A man who was "heavier than a sumo wrestler" has lost an incredible 24-and-a-half stone and turned his life around.

Dan Howie, from Derby, weighed more than 42 stone when he decided he need a change – and has since shed half his body weight.

The 31-year-old had to buy two seats on planes because of his size, and couldn’t fit through the turnstiles whenever he went to watch his beloved Derby County.

Dan told Derbyshire Live he was struggling to cope both physically and mentally.

He said: "Eating the wrong stuff, no exercise, working behind a desk, it was a combination of things which caused the weight to creep up.

"I became lazy, started drinking heavily on nights out four times a week. I used to drink a bottle of rum before a night out because I felt I needed it to give me the confidence to go out being the size I was."

He continued: "While I was out I’d have 15 pints, plus shots and jägers. Then I’d get a takeaway after.

"It was a vicious circle, I’d go to work, then straight to the pub. It was a bit of depression as well, I used to order a takeaway in so I didn’t have to go out.

"I was heavier than a sumo wrestler, and not living a healthy lifestyle in the slightest."

But, Dan was inspired decided to change his habits of overrating and heavy drinking by the birth of his niece Olivia, now six, and nephew Riley, now five.

He said: "My niece and nephew being born, being a godfather to my best friend’s little girl. Those kind of things put it in perspective, and were wake-up calls for me to do something about it."

Dan moved to Blackpool and Preston for ten years of work in online recruitment.

While living in the North West in 2014, he had keyhole surgery to have a gastric sleeve fitted, which removed two thirds of his stomach.

Despite losing four stone in the first year, it was when Dan returned to Derby and joined Fearon’s Gym and Boxing Academy a couple of years ago that he really felt the full benefit.

Dan, who is thankful for the support of the gym’s founder Clive Fearon, said: "Training at the gym five days a week has helped me so much.

"Clive has done me the workout and meal plans, but he’s helping a lot with the mental side of things as well.

"It’s hard because I have to think of everything differently now. I still sometimes think as that bigger person, thinking I can’t do things because of my size. I’m trying to get over stuff like that.

"I never went for a walk before, I got tired and out-of-breath after five minutes. But, I can now play sport with my nephew, and take the dog for a walk around Elvaston Castle on a Sunday.

How Dan’s daily diet has changed

Breakfast: No breakfast until at work, then just a sandwich from the supermarket around the corner

A van would come around at 10.30am – Dan would have a bacon or sausage cob, with a bag of crisps, chocolate and a fizzy drink

Lunch: Went to the pub for a fried dinner like steak and chips with a pint

Dinner: Takeaway or go to a Chinese restaurant twice a week

Drinks: Drink half a bottle of rum before a night out then 15 pints, plus shots, four times a week

Dinner: Salmon with a boiled egg, and spinach or salad

Drinks: Dan only drinks alcohol on special occasions now – three or four pints at Christmas and that’s about it

"Life’s getting a lot better, easier, and I’m a lot happier with myself generally."

Before embarking on his weight loss journey, Dan, wore 6XL clothes he bought online and from specialist shops.

Now, Dan has slimmed down to 17st 9lbs, the weight he was when he was at school.

Dan is delighted that his new 38" waist means he can now buy 2XL clothes from high-street shops.

He said: "I haven’t been this size since I was 14. I used to buy my clothes from Big and Tall or Jacamo, or a shop in Blackpool which imported stuff from America.

"It hit me just before Christmas that I can now buy clothes off the peg for the first time in my adult life, which is a massive thing for me.

"I don’t know why, but people think that all big blokes want to wear Hawaiian shirts, we don’t! I can shop at Next and M&S now. It’s nice to be able to buy normal clothes."

Some of the most embarrassing moments of Dan’s life came when he was forced to use the disabled entrance to get into Pride Park to watch Derby County.

Dan, who works in Birmingham for online recruitment company CV library, said: "I used to go and watch Derby County, but I couldn’t get through a turnstile without having to squeeze through sideways or getting stuck.

"They had to open the disabled access for me. It was too embarrassing and it put me off from going for a long time.

"But, last week I felt confident enough to repurchase my season ticket and get one for my nephew."

After his confidence took a big step forward last week, Dan’s next target is to visit a theme park this summer.

Dan, who is 5ft 11, said: "A few years ago, I went to Oktoberfest in Stuttgart where there were some rides, and I actually got turned away because of my size.

"I’ve never been anywhere like that since. So my next big one is to go a theme park, because I’ve never been to one just in case I got turned away because of my size."

Dan has another huge challenge ahead of him, when he takes to the ring for Fearon’s Gym charity boxing event on Friday, March 8.

He said: "When I started the boxing training, the weight dropped off hugely, and I’ve lost over five stone since September.

"That five stone has been the difference which means I can go and buy clothes off the rack in shops.

"There’s been sweat, blood and tears, but quitters never win and I’m determined to get over the line and hopefully win that belt."

Those who would like to support Dan’s fundraising for Ashbourne Animal Welfare can visit his JustGiving page here.