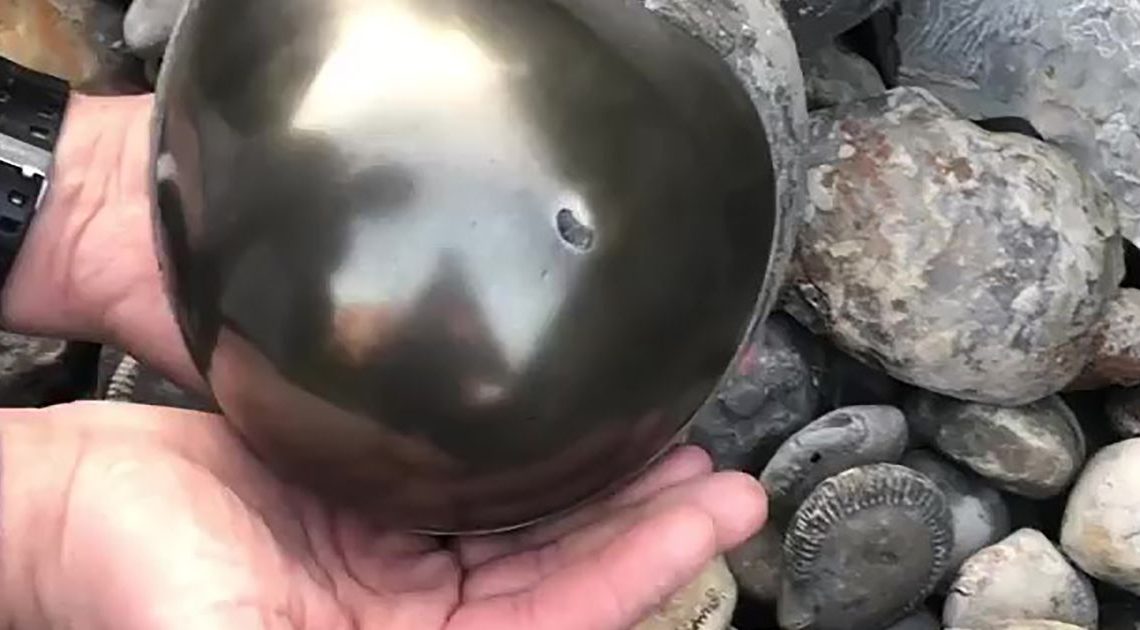 Aaron Smith, 22, spotted the shiny rock while exploring Sandsend Beach in Whitby, Yorkshire, and became excited when he realised it gave all the signs it contained a fossil.

The medical student, who hunts for them twice a week, claims the fossil is an Eleganticeras from the Jet Rock Shales of the Upper Lias in the Lower Jurassic period.

Aaron was filmed holding the shiny cannonball-shaped rock up to the camera, before opening the fossil to show the stunning palm-sized Elegantericeras inside before closing it again.

He claims the limestone of the ‘golden cannonball’ was naturally coated in iron pyrite – also known as fool’s gold – which he polishes up to give it its glossy appearance.

Aaron posted the video online with the comment: "Here’s a video of us opening one of our huge Cannon Ball fossils.

"The limestone nodule (rock) is coated in Iron Pyrite, meaning we can polish it to become Golden, seen in our previous videos

"It still impresses me that these 185million-year-old fossils are along our beautiful Yorkshire Coastline waiting to be found.

"Albeit, this particular prestigious example is found only once every few years."

The fossil hunter filmed the short video in his back garden against a huge pile of ammonite fossils that he and his dad have collected.

Aaron, who is from North Yorkshire, said: "Generally when people see the video, or see these fossils in real life, they absolutely adore them.

"They love them much more than our marine reptile fossils in many cases which is quite annoying because the marine reptiles are my favourite.

"Fossil hunting is a hobby of mine, or perhaps more like a serious passion.

"I got into it because my dad was very interested in fishing and fossil hunting too so we had lots of exposure to this amazing coast.

"I remember very distinctly searching for our very first ammonite, when we cracked it open we were all so excited! This lit the fire for our future passion to develop.

"Often we can tell that a rock contains a fossil because you can see the edge of the fossil around the outside of the rock."