Home » Lifestyle » Man creates a 30,000-bulb Coca Cola truck in his garden to cheer up neighbours 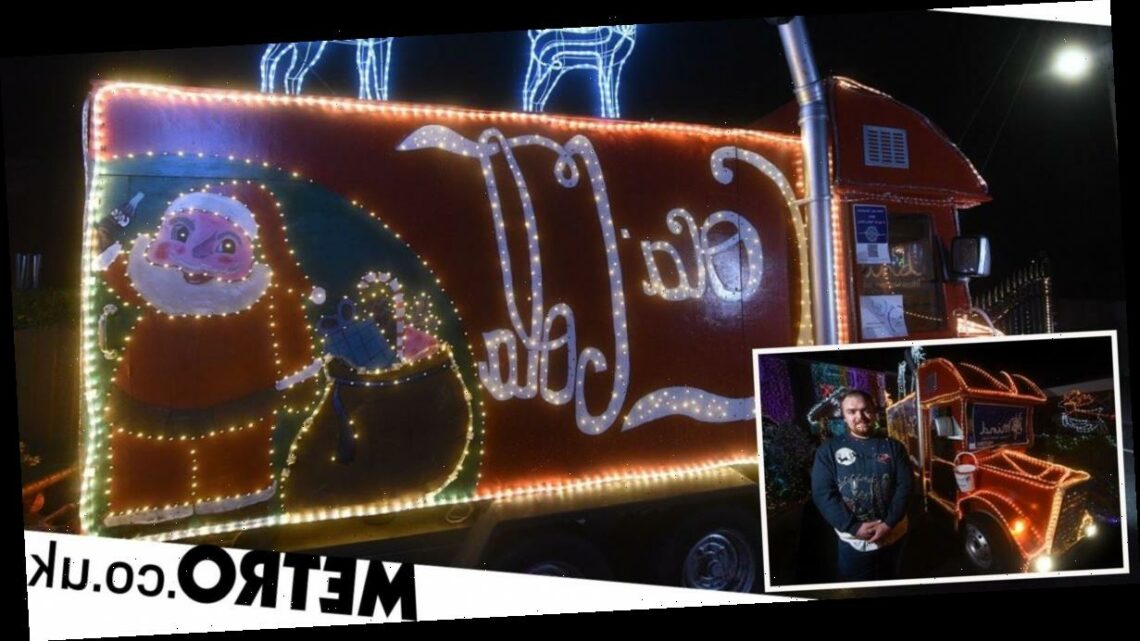 Man creates a 30,000-bulb Coca Cola truck in his garden to cheer up neighbours

After Coca-Cola announced its iconic Christmas truck wouldn’t tour this year, a Shropshire man was so gutted, he decided to make his own.

Shaun Pickering, 26, made the truck in his front garden to cheer his community up after a difficult year of lockdowns.

Shaun built the lorry from pieces of material discarded at his home in Telford.

‘I made the truck because the original has been cancelled,’ he explained.

‘I was upset when I found out it had been cancelled because it’s usually exciting.

‘People usually flock to their local shopping centre just to see the Coca-Cola truck so, when they had to cancel, I thought they’d be even more disappointed people after such a tough year.

‘I don’t normally put the decorations up this early. It’s because of the year everyone has had. I thought it hopefully would brighten people’s lives up.

‘As soon as little kids and adults on the estate saw it, they get excited.’

Strangers who’ve seen pictures of the truck shared on social media have travelled up to 30 miles just to get a glimpse of the creation.

Some have contacted Shaun online to offer their praise.

Shaun added: ‘We’ve actually had people come to the house and ask if I can be in their photos of it.

‘I have had messages online from people asking if they can have a look, or if they can take photos with their kids standing next to it and that sort of thing.’

Shaun’s brother Ryan, 24, and sister Louise, 30, who live separately in Telford, helped Shaun design and build the truck, which was complete within a week.

The siblings used their late dad’s old car trailer as its base, built the bodywork from old bits of plastic, metal, and timber, painting the structure the classic red.

‘We just went down the scrapyard for most of the bits and pieces. We even found the steering wheel and mirrors there,’ Shaun, a carpenter, added.

‘It’s been a good project. We lost our dad, John, of heart disease so it’s been the one time we’ve really needed each other but we’ve been unable to be with each other. We would have liked to have been together more.’

Shaun is fundraising for mental health charity Mind and strangers who’ve seen the festive display have donated £1,000 for the good cause so far.

He continued: ‘Since our dad’s death, we have had our struggles with mental health. The NHS has been great.

‘More people are talking about mental health and more are becoming aware of these challenges, which is great.’

You can donate to the cause on Shaun’s JustGiving page.