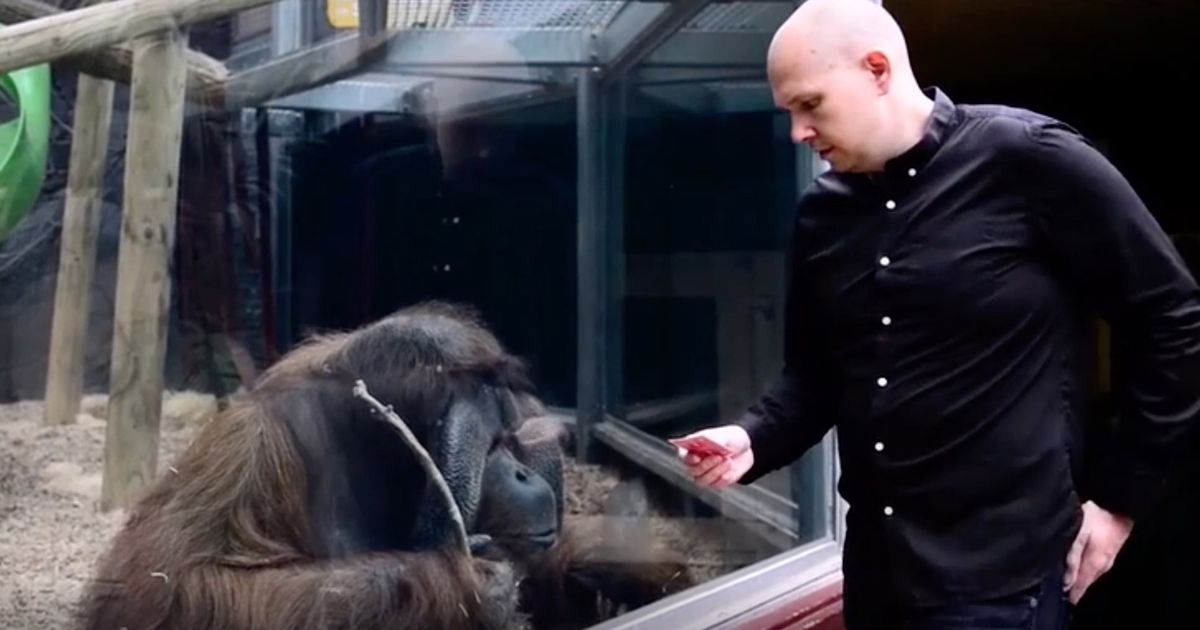 A magician who enlisted the help of an orangutan to perform an incredible trick has paid tribute to his accomplice after his death.

Popular monkey Rajang was 50 when he died at Colchester Zoo last week.

For years he drew crowds to the Essex tourist attraction – and was famously branded a lucky charm after he kissed a pregnant woman’s baby bump after she previously suffered six miscarriages.

Two years ago, at the age of 48, he featured in a mindblowing video alongside Essex magic man Matt G, who placed a playing card against the glass of Rajang’s enclosure.

Incredibly the curious orangutan, on the other side of the glass, is then able to grab it and begins playing with it.

He then appears to place the card back on the glass, and taps it with a stick – as if he’s trying to ‘transport’ it back through the pane.

Commenting on Rajang’s death, Matt G – who has not revealed how he carried out the trick – wrote on Facebook: "Such sad news.

"This guy gave me a moment in magic I will never forget. Sleep tight big fella."

His death was met with sadness, and among those to pay tribute was mum Nina Marston, whose baby bump the orangutan famously kissed when she was pregnant.

After suffering the heartbreak of six miscarriages, the 37-year-old went on to give birth to a healthy baby girl, named Elizabeth.

Nina told Essex Live: "I’ve been going to the zoo since I was four and five and Rajang was always my favourite.

"I go to the zoo probably once or twice a year now, I used to go along with my sister-in-law and I got her really involved in loving the zoo and Rajang and I saw him each time I went.

"When I had my first miscarriage, we went to Norfolk and we went to the zoo. It’s a place where I can switch off.

"During my seventh pregnancy, I went with my friend and we just decided to go for a walk and get the baby moving so we decided to walk miles around the zoo.

"We got to Rajang’s enclosure and there was a massive queue, but my friend was patient and waited with me until there was a gap.

"I lifted up my top to show him my belly and he shuffled along the side and just gave it a big kiss. I just cried.

"It was such an emotional moment, it was only a small thing but it meant a lot to me. I have seen him do it many times to people and I just always thought it was so lovely.

"I would have been devastated if he hadn’t done it. There were things I wanted to do while I was pregnant and that was one of them.

"He’s not that interested in kids, my godson tried but he wasn’t interested. Rajang did do it to my husband’s belly once though."

To Nina and Lee’s delight, she gave birth to a healthy baby girl in November 2017, named Elizabeth, who Nina calls her ‘lucky number seven’.

Paying tribute to Rajang, she said: "When I heard the news, I was a little bit tearful because I had seen him so many times over the years. I was quite emotional.

"He was such a massive part of the zoo, people have loved him for such a long time.

"I think, especially in the olden days, he was one of the first animals you saw and when his enclosure moved, everyone would make sure they saw him.

"It is a shame. I took my daughter to the zoo but she fell asleep so didn’t get to see him. It’s a shame she’s not going to have those memories that I had as a child. When they are really young, they don’t really understand what’s going on.

"I will take her back and I’m going to get annual passes, it is such a lovely place."

Rajang passed away after suffering from chronic arthritis and other health problems that come with old age.

In the last few months, Rajang’s condition worsened and he began experiencing periods of losing focus similar to that of a degenerating neurological condition.

Despite best efforts from the veterinary team, Rajang’s condition inevitably further deteriorated and the difficult decision was taken to end his suffering and put him to sleep.

The orangutan was one of the most popular residents with both staff and visitors- including Nina, after first arriving in 1980.

Colchester Zoo announced the sad news about Rajang on Wednesday and shared some special memories they have had of him.

They said: "All the animals in our care have their individual personalities which we all fall in love with but Rajang was one of a kind with a personality so unique, fascinating, loving and interesting.

"Rajang always had a twinkle in his eye and despite orangutans not having the same facial muscles to express their emotions the way in which humans do, Rajang communicated with his keepers and visitors through his beautiful eyes and expressions he would make with his mouth.

"Rajang always showed interest in people, and no doubt there will be a number of pregnant visitors who experienced Rajang ‘kissing’ their baby bumps, something he became world famous for through viral videos.

"Rajang would also copy his keepers’ actions, so much so that they would give him similar utensils to be able to fulfil the actions he was seeing; Rajang cleaned his own windows and also done some gardening by putting a plant in a flower pot after watching the gardener! It’s moments like these that we will treasure forever."