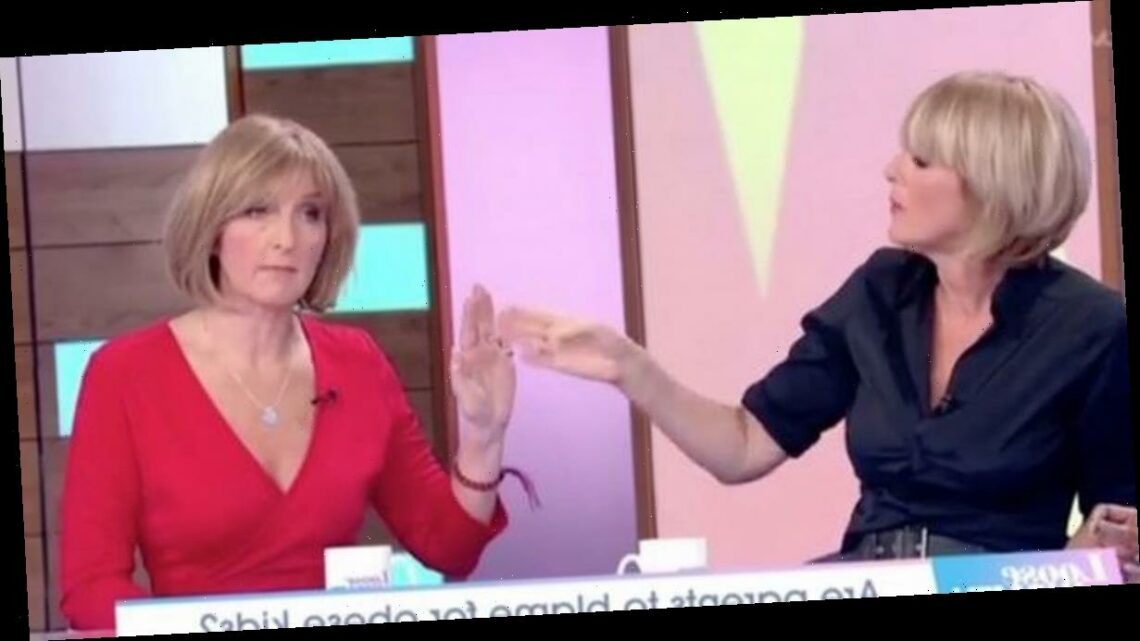 Former Loose Women star Saira Khan appears to have made her feelings about her former cohosts clear by unfollowing Jane Moore, Nadia Sawahla and Kaye Adams on social media.

Loose Women has been on screen for 20 years and during that time there have been furious fallouts both on-air and off.

Following Saira'a brutal social media cull, here are some of the most divisive moments from the opinionated panel.

Things got seriously heated between Kaye and Jane after they disagreed during a segment about childhood obesity.

Kaye argued that it wasn’t parents fault if their child was struggling with their weight while Jane was insistent that they were responsible.

Jane and Kaye began interrupting each other and things became so heated that Andrea McLean was forced to step in, shouting: "However, for the love of God would you let all of us get to the end of a sentence?

"We are mature people who know how to get to the end of a sentence. Please let me do. For the love of God."

Kaye later posted a photo of the pair to social media in praise of Jane and the debate excusing herself and admitting that she had lost her temper.

Things got seriously awkward when Carol McGiffin called out Andrea McClean for not inviting her to her wedding to Nick Feeney.

Writing in her column for Best magazine, journalist Carol was quick to take aim at former weather presenter Andrea after other panellists were invited to the nuptials.

She wrote: "I'm ecstatic for them both, even though I wasn't invited to the wedding.

"She looked radiantly happy, as did he, so it's all good.

"What's not good, though, is that Andrea's managed to squeeze in two weddings in less time than I've been engaged to Mark, which is a bit embarrassing to say the least."

The pair have since seemingly cleared the air and have joked about the snub on the show prior to Andrea’s departure at the end of last year.

Carol aimed fire at show producers when she wasn’t invited to feature on the panel to celebrate 18 years of Loose Women in 2017.

Replying to a fan asking her whereabouts, she swiped: "Don't be daft Aaron, I only did 13 years and over 1,000 shows, why would I even be asked?"

She reposted a tweet from the show's official account and added: "Yeah, don't miss the show because sooooo many of those 'incredible' women won't be on it!"

While former panellists such as Kerry Katona and Karren Brady all made an appearance, Carol was watching from home.

Carol retweeted her outraged fans and added: "Dunno. Maybe it's because We (the old gang) left and the show stopped winning awards? Who knows?"

She appeared to soften her stance slightly later, posting: "Happy 18th Birthday Loose Women hope you're not missing me too much! Not furious, not surprised, just a teeny bit sad."

However, all was forgiven in 2019 when Carol did make a permanent return to the panel.

In 2014, Myleene appeared briefly as a panellist after which she took to social media to slate the show.

After her stint, Myleene said: "I love Loose Women. It's nice to be able to articulate and get things out there. But I feel it was getting a bit misogynistic, a bit post-menopausal or pre-menopausal and ranty.

"That's not how women should be represented so it's nice they've refreshed the panel and we can talk about politics, fashion designers and what else is going on in the week."

Denise Welch hit back and said: "Sadly ratings suggest most viewers don’t agree with you," before later deleting the tweet.

Previously Janet Street-Porter had lost her temper with Myleene on-air, snapping: "I'm happiest when I'm not sat next to you Myleene!"

Although now they are close friends, Nadia has admitted that she originally didn’t want to work with Kaye.

Nadia told Closer magazine: "We immediately didn't like the look of one another. It was so bad that I actually refused to take the job on Loose Women!

"I was actually quite intimidated by Kaye, she seemed so much cleverer than me – and she thought I was an actress 'luvvie'."

However, after a few weeks working together, Nadia realised she had made a mistake and the pair have been close ever since.

Nadia said: "We realised that we actually have a lot in common. We are both very hard workers, but we also like to laugh like drains and take the pi**. And we both like gin and tonics!"