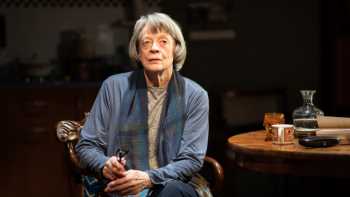 How helpful are warnings from history? Two years ago, in February 2017, Amazon briefly sold out its entire stock of Hannah Arendt’s 500-page treatise, “The Origins of Totalitarianism.” In it, the German-born philosopher surveys the conditions that gave rise to Nazi rule, charting fascism’s incremental creep. Social shifts are slow, sometimes too slow to spot, let alone stop. Liberty gets lost, bit by bit, as if to longshore drift. To arm ourselves against any repetition, we must remain alert to the telltale signs. Art can act as an alarm call.

Christopher Hampton’s play “A German Life” wants to be just that. It even breaks out Maggie Smith in case of emergencies, deploying the 84-year-old to pull in a crowd to hear a history lesson that chimes, alarmingly, with our own times. She plays Brunhilde Pomsel, an elderly German woman who, in her youth, wound up working as a secretary for Joseph Goebbels at the Ministry of Propaganda. Her shorthand skills led her there, rather than any ideological sympathies — or so she says. She was, indeed, an “apolitical youth”; another ordinary German carried along on unstoppable socio-political currents.

Hers is an on-the-ground, eyewitness account, a first-person recollection of the way Nazism took hold. Hampton’s script streamlines the testimonial Pomsel committed to camera, aged 104, for German filmmakers Christian Krönes and Florian Weigensamer. If it’s largely linear, following a familiar trajectory from WWI through to the Third Reich itself, it’s set apart by privileging the personal over the political. Pomsel glances off significant historical events — forgetting the name of Kristallnacht, for instance, or handling the hyperinflation of the 1920s in a single sentence — to elevate her own experiences: friendships, family crises, first jobs and first loves.

It’s a reminder that history only coheres in hindsight. In the moment, it is always uncertain and up for grabs and, while we spot glimpses of the gathering storm — Pomsel’s brothers stomp off in their brown shirts — she remained fairly oblivious herself. Totalitarianism seems to hide in plain sight, just visible but unstoppable, a new uneasy norm. Right now, it’s a reminder we need: contemporary echoes — a hounded press, thuggist mobs on the street, open and unchallenged anti-Semitism — ping off the stage.

British theater’s been here before, of late, and with far more theatrical flair.  Roland Schimmelpfennig’s “Winter Solstice” watched a war criminal throw off his sheep’s clothing, while “Effigies of Wickedness” made a cabaret of curiosities out of songs the Nazis banned. “A German Life” largely states its case rather than showing it, bar Anna Flieschle’s design: a parquet floor that shifts underfoot like tectonic plates, as Jon Clark’s lighting dims to a chilly darkness, wrenching an elderly woman out of her homely context and into an abstract void — an example to us all, perhaps, or else the epitome of the banality of evil.

Indeed, Smith plays Pomsel as she might one of Alan Bennett’s “Talking Heads” monologues: wryly ironic and wanly gossipy. It’s a performance that combines the knowingness of hindsight with the naivety of youth, blasé enough to catch you off-guard when the magnitude of events suddenly cuts through. “Isn’t it funny,” she muses, stroking her silk scarf. “The things you can’t remember and the things you’ll never forget.”

All of which makes “A German Life” more elegant than it is engaging. It’s best watched, like an eclipse, by looking to one side. Seen in that way, it becomes a meditation on memory and history, each as unreliable as the other. A reminder never to forget the past, Pomsel’s lapses prove just how easy that is. Indeed, history leaves gaps of its own. Hers is an unusual perspective, largely written out: a female lens on the Fatherland. Nazism excluded women from public and political life and its ideological is rigidly masculine. Pomsel remains (at least ostensibly) unseduced by it, resisting the rush of testosterone at rallies that, to her, consisted of “a load of men with B.O.” Goebbels himself she cuts down to size: good-looking but too short to be attractive, a “demented midget” when at the podium.

The question, left hanging by director Jonathan Kent’s production, is whether we believe her. When Pomsel pleads naivety as an excuse for complicity, or denies all knowledge of the Holocaust, is she telling the truth? What about the moments her memory misses out? It’s here that the difference between a recorded testimony and a reenacted one makes itself felt. To what extent is Pomsel performing? Is she sticking to a script? “A German Life” remains uneasily ambiguous. It contains contradictions and leaves out key details until the very last. Pomsel was, don’t forget, a professional propagandist. How often do they tell the truth?

As a direct warning, however, there’s not a lot we don’t already know, either from aphorisms or from Hannah Arendt. Fascism doesn’t turn up in fancy dress. “The sad truth,” Arendt wrote, “is that most evil is done by people who never make up their mind to be good or evil.” Brunhilde Pomsel is a case in point. Any one of us could be, even now.

Production:A Bridge Theatre production of a play in one act by Christopher Hampton drawn from the life of and testimony of Brunhilde Pomsel