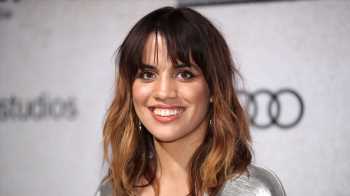 Listen: Natalie Morales Forgives Justin Theroux For Looking Too Hot in ‘The Leftovers’

Natalie Morales’ character on the new NBC sitcom “Abby’s” is believed to be the first bisexual lead on a primetime sitcom. But Morales notes that it’s not the character’s defining characteristic.

“It’s one of the many things about her but it doesn’t define our show,” she told Variety‘s “My Favorite Episode” podcast. “I’ve been really lucky in my acting career thus far, my characters have just happened to be Latina, they’re never about that. While we need representation in general in many fields I happen to belong to some of, it does annoy me that a lot of the time when we get representation it’s given to us by people who are trying to fill a category. There are a lot of well-meaning white people who try to tell stories that are not theirs, so why not just write a character and cast whoever is the best person for it?

“Maybe they’re black, maybe they’re Latina, maybe they’re Asian. I’ve been lucky in my career to play roles of people who happen to look like me but it’s not about how I’m oppressed or about my other-ness,” she added. “It doesn’t define the character, which we need more of. As much as we do need stories that explain why we’ve been oppressed, we also need so much more of ‘hey this is a regular person in a regular life.’”

On “Abby’s,” Morales plays the owner of an unlicensed backyard bar that attracts a vibrant local crowd in a San Diego neighborhood. The show, from creator Josh Malmuth and executive producer Mike Schur, is the first ever multi-camera sitcom with a studio audience to completely shoot outdoors, on a real backyard stage. It’s also believed to be the first network show with a Cuban lead since Desi Arnaz.

Before “Abby’s,” Morales developed a following from series such as “The Middleman” and “Parks and Recreation,” as well as gone-too-soon series like “Trophy Wife” and “The Grinder.”

She’s also quite simply a fan of good storytelling, which is why “The Leftovers” is on top of her list of favorite TV series. And her favorite episode is “International Assassin,” from Season 2.

On this edition of the podcast, Morales discusses “The Leftovers,” directing for the Duplass brothers, how she’s making history with “Abby’s,” and even why Cardi B should star in a reboot of “The Nanny.” Listen below:

Written by Nick Cuse and executive producer Damon Lindelof and directed by Craig Zobel, the “Leftovers” episode “International Assassin” was a key episode for the series, and aired Season 2 on November 22, 2015.

In the episode, Kevin, played by Justin Theroux, finds himself in a hotel that is a bit of a purgatory, and he discovers he has chosen the role of international assassin — tasked with assassinating Patti Levin, who in this realm is a presidential candidate. Or is it Patti?

For Morales, “The Leftovers” was a show that she never let pile up on her DVR, as she was compelled by the show’s unique take on life, death, metaphysics, relationships and more. She also loved how quirky the show could get — referencing the Wu Tang Clan and obsessing over “Perfect Strangers” to the degree that Mark-Linn Baker even appeared as himself.

“It was one of my favorite shows to watch,” she said. “There are all of these amazing beats on that show that are so good. I loved what that show was doing for the TV format. It was like, no, why does it need to be what you think it should be? It can be whatever we want it to be, it doesn’t matter. ‘International Assassin’ is definitely one of those episodes, it’s so metaphorical in so many ways.”

The episode was also one of many where viewers got to see a lot — truly a lot — of star Theroux’s physique.

“I think Justin Theroux is interesting to watch despite how good looking he is,” Morales said. “There was a lot of Justin Theroux in that episode, which I’m not complaining about! I forgive Justin Theroux for how incredible he looks at the moment. And it doesn’t get in the way of me buying any of his acting or what’s going on, which is nice. He’s so good in that whole series.”

Meanwhile, Morales admits she’s not a fan of the term “stan.” “It’s literally an amalgamation of ‘stalker’ and ‘fan,’” she said. “It comes from that Eminem song. But get a life, don’t be a stan of somebody!”

The star of NBC’s new sitcom “Abby’s,” Morales told Variety‘s “My Favorite Podcast” that she appreciates fans, and is a fan of plenty of things herself. But the fan/star relationship, she admitted, is an odd one.

“I thought about how much happiness and open mindedness TV and movies brought to my life,” she said. “I’ve been introduced to things that I would never know because of television. I think ‘Will & Grace’ had such a big effect on how people viewed the LGBTQ world when it came out. Movies and TV can do a lot for the world. So I’m happy when people tell me they’ve seen my work and they like it because I’ve affected them… I think it’s a weird machine.

“You could be a fan, appreciate someone’s work,” she added. “But it’s the terrible machine of fame that has been created to take money from people and make them feel like they’re not good enough, or they should be like these other people. That’s what I don’t like about it. I’m just a person who likes to play pretend.”

Variety’s “My Favorite Episode With Michael Schneider” is where stars and producers gather to discuss their favorite TV episodes ever — from classic sitcoms to modern-day dramas — as well as pick a favorite episode from their own series. On “My Favorite Episode,” some of the biggest names in TV share their creative inspirations — and how those episodes influenced them.

Portugal. The Man Among Headliners At Float Fest 2019
World News