Home » Lifestyle » Lisa Snowdon is mocked by This Morning viewers 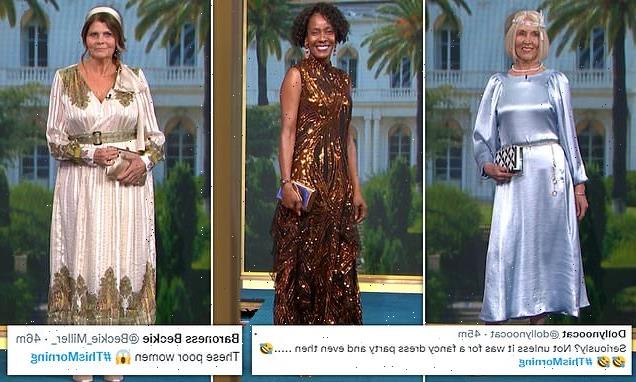 Lisa Snowdon is mocked by This Morning viewers

What a let Downton! This Morning models are mocked after being dressed in ‘vile’ 20s-inspired dresses and ‘unflattering’ headpieces to mark release of new film

Models starring in This Morning’s fashion segment were mocked by viewers today after being dressed in outfits inspired by the 1920s to mark the release of the new Downton Abbey film.

Presenting the segment, Lisa Snowdon, 50, who lives in London, said she had been inspired after seeing the cast of Downton Abbey: A New Era walking the red carpet in satin and feathers at the premiere last night.

The presenter went on to reveal how it was that possible to recreate the most popular trends from the 1920s with pieces from the high street, before introducing four different models in satin dresses, head pieces and embellished shoes.

However many of those watching were left unimpressed by the segment, with one posting on Twitter: ‘Seriously? Not unless it was for a fancy dress party and even then…’ 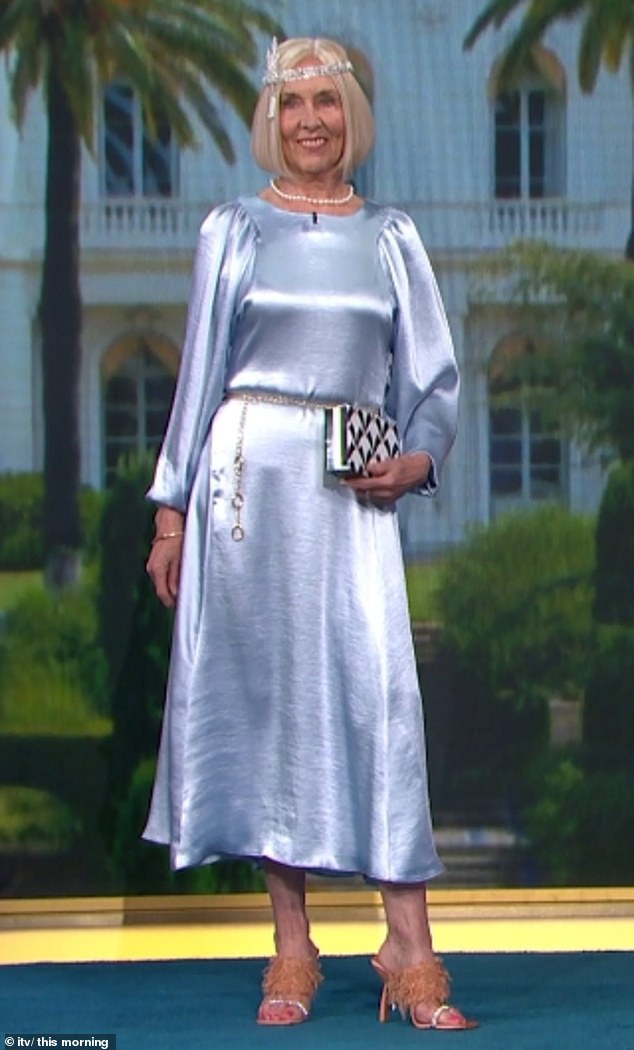 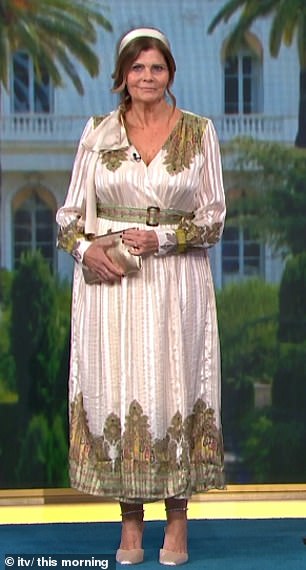 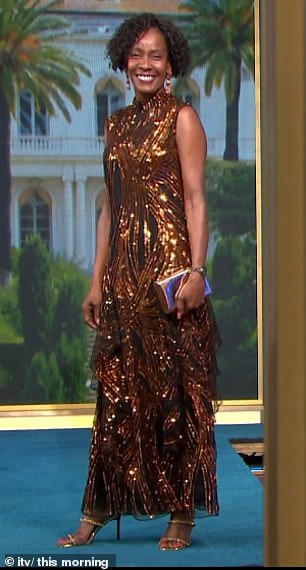 Lisa appeared on the daytime show talking to presenters Holly Willoughby and Philip Schofield. She introduced the first model, saying: ‘Sue, who is the epitome of the Roaring Twenties in the satin and a beautiful headdress, absolutely gorgeous.

Saying the dress was ‘very similar’ to one worn by an actress in the Downton Abbey: New Era film, she continued: ‘Even though the new film is set on the French Rivera the elegance is very much still there.

‘I love the sleeve details. As I said, the shift dress is really flattering and get good underwear underneath there then you’re good to go.

Meanwhile she suggested pairing the dress with a 1920s style headband, a  pearl necklace and an art deco bag.

Holly and Philip looked impressed as Lisa prepared to introduce the second model Kim, describing her outfit as ‘Downton with a twist’.

Lisa explained: ‘Now with a lot of the styles in Downton it’s very vintage and hard to wear for a lot of us ladies, so what we’ve done is a little twist.

‘We’ve gone for this beautiful wrap shape dress but with those kind of muted jewel tones that you see in the twenties. It’s got the paisley print and beautiful neckline that I think is super flattering.’ 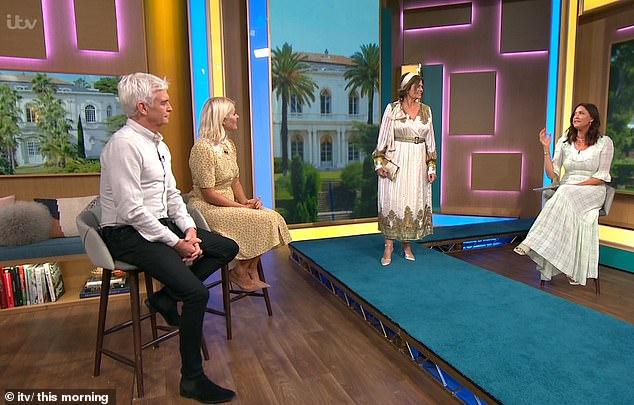 ‘You’ve got the belt that cinches you in and that very pretty print which we’re seeing a lot of in the film as well. Then the lovely kind of shimmer running through it is very 1920s.’

Calling the outfit ‘very pretty and very chic’, she continued: ‘We’ve added a headband, a little scarf into the hair, which I think also elevates the look.’

‘Then can we look at these very pretty shoes? Little satin shoes with that little dip at the front, so flattering.

‘You’ve got diamante around the ankle and diamante at the back as well, which I think is so elegant. 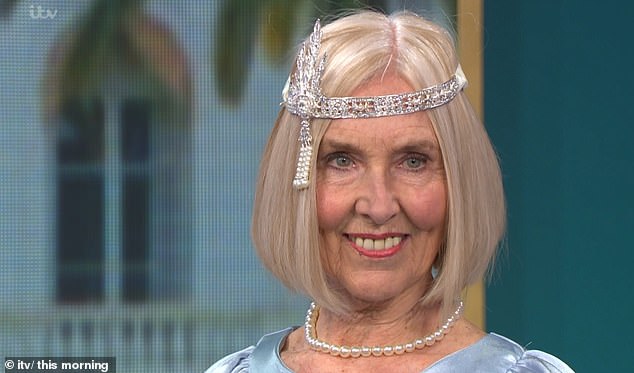 Despite Lisa’s enthusiasm for the unusual headpieces and jewels, many of those watching compared the outfits to ‘fancy dress’ costumes 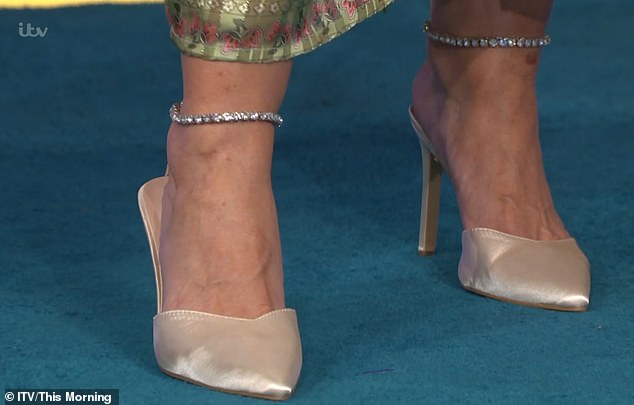 Lisa gushed about the ‘very pretty shoes’ paired with the paisley print dress, while claiming shoppers could wear each item repeatedly

Introducing the third model, she said Alison looked like a ‘French fancy’, explaining: ‘ Literally you look like you’re walking on the French Rivera, you look so beautiful, so romantic in this lovely, beautiful French fancy floral dress.’

‘Really flattering. The elasticated waist gives you a bit of a waist but is still comfortable.’

‘Then the shoes. This is just proving how much impact and effect that Downton Abbey is having on the High Street.

‘Mary Janes are back and it’s all this kind of little thin straps that are very reminiscent of the 20s and the 30s.

‘A really comfortable heel, muted colour. You could dance all night in them.’

Lisa claimed her last outfit was a ‘showstopper’ as the model stepped out in an ankle length dress covered in bronze sequins. 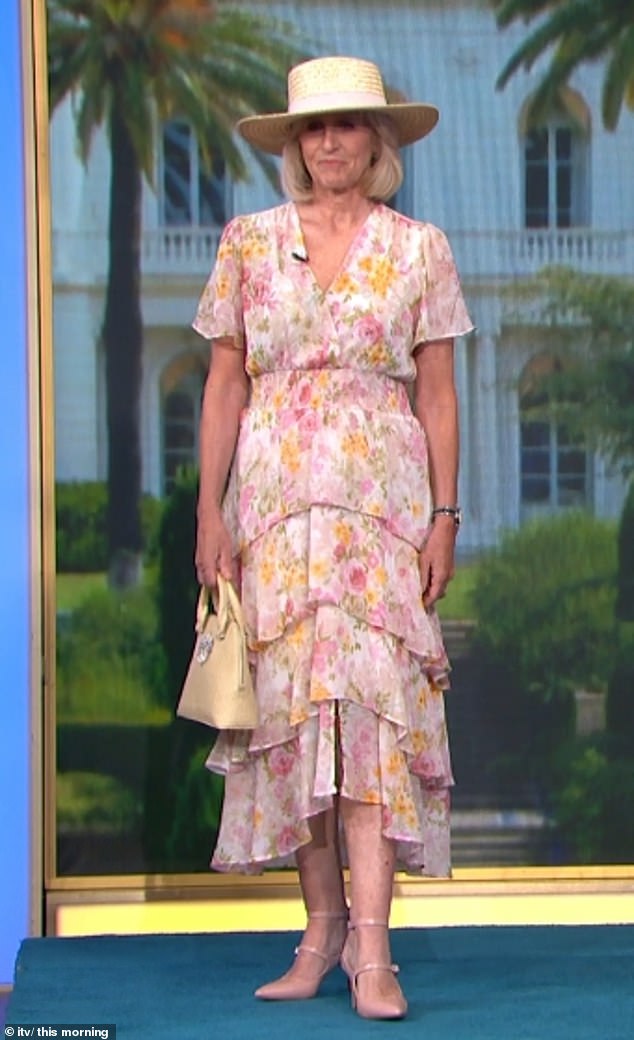 She said: ‘This is your forever dress. If you buy sparkles you know that you’re going to be spending a little bit more money but they are the sort of dresses that you invest in and keep in your wardrobe.

‘It’s that I’ve got a big party an invitation comes through the letter box and you’re like ‘what am I going to wear’, ‘ah I’ve got the perfect dress’.

‘You’ve always got that dress in your wardrobe.’

Meanwhile she said the earrings would also add ‘twenties glamour’, while the shoes were ‘stunning’ and ‘really elegant.’

Despite Lisa’s enthusiasm for the segment, a stream of viewers took to Twitter mocking each of the outfits that featured on the show. 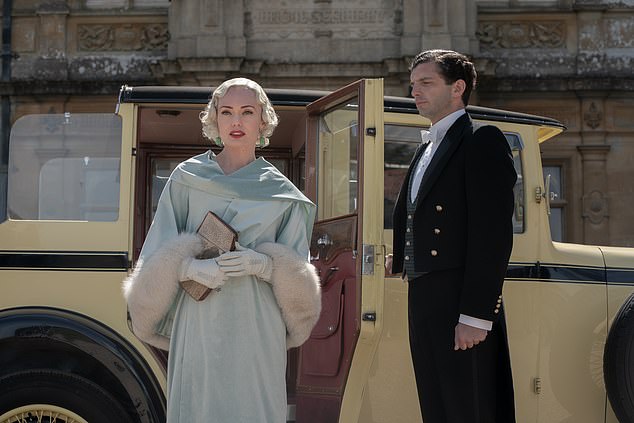 Presenter Lisa claimed the looks were inspired by the new Downton Abbey film, and compared one model’s look to a gown worn by Laura Haddock in the trailer (pictured) 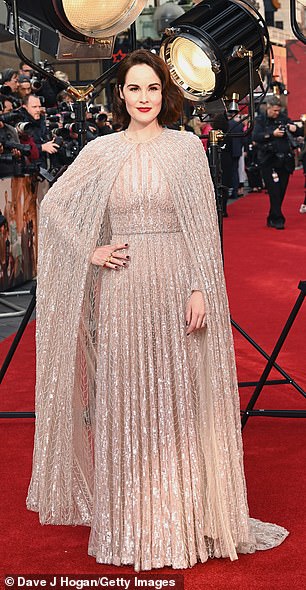 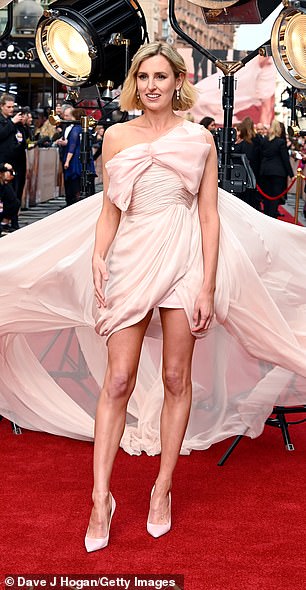 Commenting on the first look, one person wrote: ‘Where might Sue wear such an outfit #ThisMorning?’

Another said: ‘These fashion segments always make me howl #ThisMorning’

‘These poor women,’ a third commented.

A fourth joked: ‘I’m so pleased they’ve done this fashion segment. I often waft about big Tesco dressed like something from the 1920s #This Morning’

One viewer claimed the outfits aren’t even appropriate for a fancy dress party, while another commented on the material.

‘What the f*** has she dressed the model as… #ThisMorning,’ one wrote.

A second added: ‘Forget the dress the headband is doing her no favours.’

A third commented: ‘Omg this dress is shocking.’