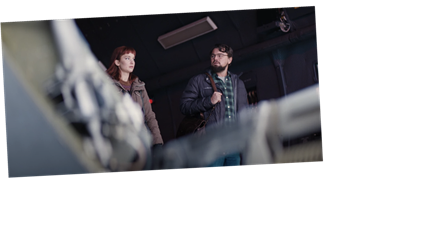 Our lord and savior Netflix has blessed us once more in the darkest of times. The streaming platform released a preview of its upcoming 2021 films, and it included a clip of one of the most anticipated movies of the year: Don't Look Up.

According to Netflix, the star-studded project "tells the story of two low-level astronomers, who must go on a giant media tour to warn mankind of an approaching comet that will destroy planet earth." DiCaprio and Lawrence appear to be the astronomers in question, but the ensemble cast is jam-packed with A-listers (like, all of them?), including Meryl Streep, Cate Blanchett, Chris Evans, Jonah Hill, Ariana Grande, Kid Cudi, Timothée Chalamet, and the preeminent male Perrys: Tyler and Matthew.

The new clip features DiCaprio in open-mouthed apprehension exchanging glances with a similarly concerned Lawrence, whose character wears a cat-eye and nose stud. They're landing in some sort of carrier, and, ah, they're worried!

A release date for the film hasn't been named, but 2021 just got a lot more promising.

In addition to Don't Look Up, this year's Netflix slate includes exciting titles like The Harder They Fall with Idris Elba, Jonathan Majors, and Regina King, Halle Berry's directorial debut Bruised, The Woman in the Window featuring titular woman Amy Adams, and dozens of others.

Queen’s Gambit spoilers: Who does Beth Harmon end up with?
World News