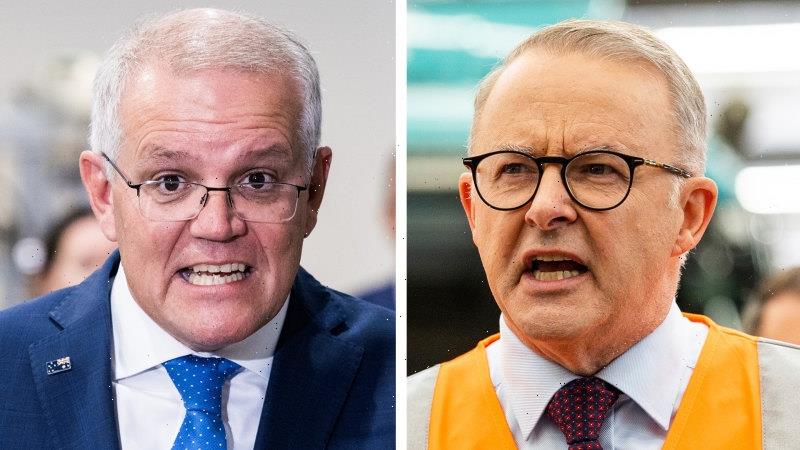 Leaders clash over China, boat turnbacks, and the NDIS in first debate

Scott Morrison and Anthony Albanese have clashed in a fiery debate over China’s expansion into the Pacific, as the prime minister attacked his opponent’s history on asylum-seeker boat turnbacks and the Labor leader fought back on the NDIS.

In a sign of the lack of significant policy differences between the two leaders, Morrison on Wednesday night stuck to his attacks on Labor over asylum seeker boat arrivals in 2013 and accused him of siding with China, while Albanese continued his claim that the Coalition could extend the cashless welfare card to pensioners. 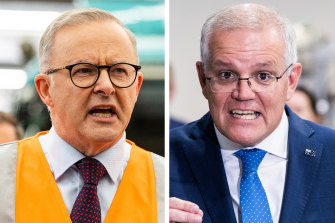 The tensest exchange at the Sky News People’s Forum in front of 100 undecided voters in Brisbane – the first debate between the two leaders – came when they were questioned over a new security pact between China and the Solomon Islands.

Labor’s foreign affairs spokeswoman Penny Wong on Wednesday accused the government of the “worst failure of Australian foreign policy in the Pacific” in almost 80 years.

“This isn’t so much a Pacific Step Up, it’s a Pacific Stuff Up,” Albanese said, referring to the Coalition’s Pacific foreign aid program.

Morrison said the deal came after years of increasing Chinese interference in the region and suggested Labor’s criticism of the government’s actions showed it was “taking China’s side”.

“That is an outrageous slur from the Prime Minister,” Albanese responded. “And national security issues shouldn’t be the subject of that kind of slur,” he said.

“We all agree that China has been aggressive, the question is: how do you respond to it.”

Both leaders made pitches to voters about the economy, cost of living and housing affordability, as rising inflation hits Australian households.

Morrison repeated his warnings about the economy being weaker under Labor compared to under the Coalition’s management. “We’re heading in the right direction,” he said.

Albanese said he was driven by the ideal that no one is left behind and that no one is held back, saying costs were going up while wages were stagnant.

“If I’m Prime Minister I’ll accept responsibility and I’ll work hard … and not always seek to blame somebody else,” he said.

The leaders were also questioned over their respective scare campaigns after Morrison repeatedly suggested over the past week that boat arrivals would return under Labor.

Morrison asked Albanese why he did not support boat turnbacks when he was deputy leader in the Rudd government in 2013, prompting the Labor leader to accuse Morrison of trying to sow division in the community.

“Why did you not support turnbacks?” Morrison asked.

Morrison asked Albanese if that meant Labor was planning to turn back asylum seeker boats nine years ago, to which the opposition leader replied: “No. No, that’s right.”

Albanese then challenged the prime minister.

“Why is it Scott, that you’re always looking for a division, not looking for the truth? The truth is we supported boat turnbacks,” Albanese said.

The Labor leader also claimed the government was going to force pensioners onto cashless credit cards.

“I can assure you, we’re not going to do that,” Morrison replied.

The clearest policy difference came when the two leaders were asked what they were going to do about establishing a national integrity commission.

Morrison, who effectively ruled out pursuing the commission last week unless Labor supported the government’s model, said he had been “less than impressed” by how the ICAC has operated in his home state of NSW.

In a pointed reference to ICAC’s targeting of former premier Gladys Berejiklian, Morrison said: “It is not a kangaroo court, not something that is trying to trial people in the media. It’s not about who your boyfriend is or things like that.”

Albanese says he wanted an integrity commission “with teeth” that can set its own inquiries and operates independently of government, with the capacity to hold public hearings.

He defended the NSW ICAC and said it had found both Liberal and Labor MPs guilty of corruption.

“It’s essential that people have faith in the democratic processes and that’s not there at the moment.”

A clear theme of the night was Morrison arguing that only the Coalition could continue paying for expensive social welfare schemes like Medicare and the NDIS because it knew how to manage money and grow the economy, while Albanese accused the government of lacking the vision to create and run such programs.

A woman with a son with autism asked both leaders to paint the future of the NDIS as she was worried about funds running out.

Morrison acknowledged that Labor had established the NDIS and Medicare, but said only the Coalition’s economic management could ensure the future viability of such schemes.

“It’s always the Liberals and Nationals who have to work out how to pay for these things,” he said. “And that’s what we’ve done over the last eight years.

Albanese said Labor was responsible for major reforms like the National Broadband Network which the Liberals couldn’t achieve.

“You can’t be scared of the future, you have to shape the future and the problem with this government is its just treading water,” he said.

The two leaders also squared off over aged care, with Morrison asking why he wasn’t funding 24/7 nurses like Labor was promising.

Morrison said aged cared was complex and moving to immediately apply that standard would force the closure of facilities around the country.

“We can’t just make nurses all of a sudden fall out of the sky,” he said.

Albanese said more nurses need to be trained, citing 20,000 additional university places in areas where there are shortages and more made of the part-time nursing population.

After the recent devastating floods in Queensland and NSW, Albanese said a Labor government would spend $200 million every year through a disaster ready fund to prepare for floods, bushfires and other extreme weather events.

He attacked the government’s tardiness in declaring a national emergency after the recent floods.

“The government should have exercised its power. Its power to declare a national emergency not just in New South Wales, but in Queensland when the event happened, not wait until it was too late,” he said.

I’m desperate to swap my council house for a bigger one, but they’re all small, loud or too ‘council estatey’
World News