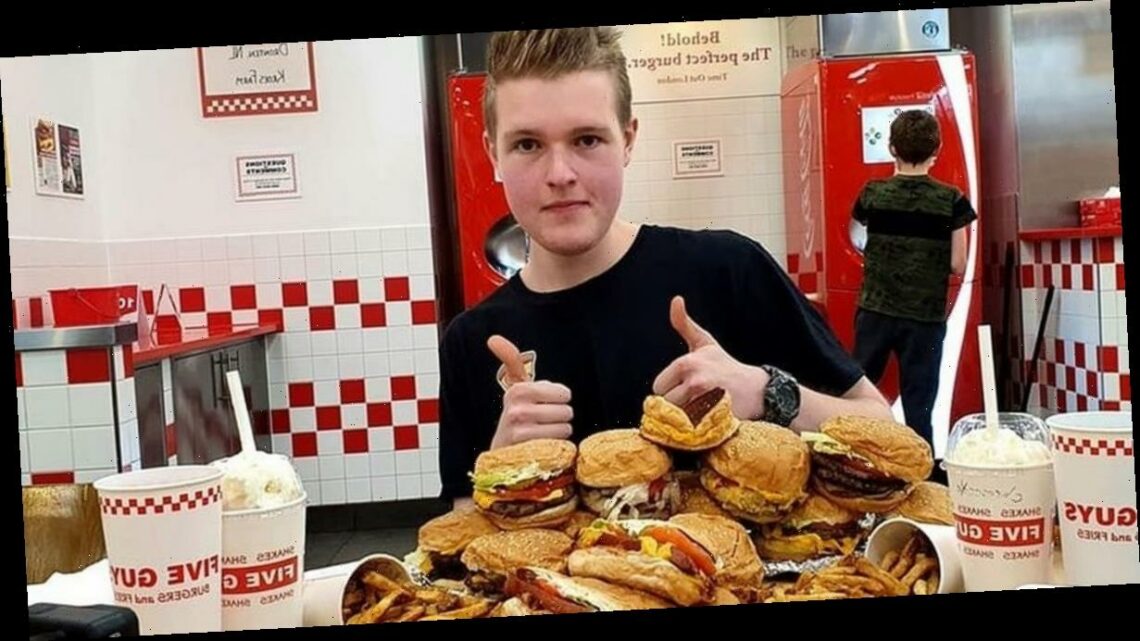 At first glance, you’d never think Kyle Gibson would be able to put away so much food.

But the 22-year-old, from Sunderland, currently ranks as number one in the British Eating League.

To prove his skills recently, the competitive eater chowed down on everything from the Five Guys menu.

He managed to guzzle 13,000 calories in an hour – including eight burgers, four hotdogs and two mammoth portions of fries.

To wash it all down with, Kyle also had to neck two milkshakes and a pair of refill drinks.

The lad completed the challenge in less than 61 minutes – without even breaking a sweat – Chronicle Live reports.

Kyle’s fast food binge was in aid of a good cause.

He was sponsored to carry out the challenge, where he raised £400 for the Newcastle West End Foodbank as well as £100 worth of food for the charity.

The competitive eater added: "The challenge was to eat the entire menu at Five Guys and I did it.

“It took me just under 61 minutes and it was not easy. It was a bit of a struggle but I managed to get through it…

"I love doing crazy stuff like this but I do realise that there are people out there who really can't afford food, who are in bad situations and generally need help and rely on places like foodbanks in order to feed their families.

"This is why I'm donating money and food to the Newcastle West End Foodbank."

He has his own YouTube channel, Kyle V Food, where he posts videos of his food challenges.

When he’s not spending time eating or making videos, the vlogger makes sure to live a healthy lifestyle.

He goes to the gym, does bike riding and hiking, and was able to continue with his fitness routine at home during lockdown.

"Six days a week, I have a healthy diet including fruit and vegetables, and I get plenty of exercise," Kylie added.

”Before the lockdown, I used to go the gym every single day and when the restrictions were put in place I still exercised at home.

"I do take part in contests like this but I make sure I keep myself healthy during the other days of the week."

Kaley Cuoco net worth: How much is the Big Bang Theory star worth?