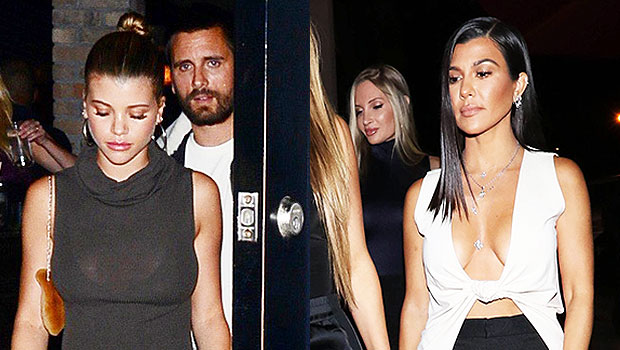 Kourtney Kardashian’s going to keep posting pics with Scott Disick because she wants to! Kourt, we’ve learned exclusively, isn’t worried at all about if it crosses a line with Sofia Richie.

If Sofia Richie feels “disrespected” by seeing pics of Scott Disick and Kourtney Kardashian together, well, that’s just too bad. Kourtney, as a source close to the Keeping Up With The Kardashians star says, is wholly unconcerned if people think she’s “crossing any boundaries with Scott and Sofia’s relationship” by taking pics of herself and her ex with their kids. And that includes the ultra sultry pic she recently posted on Instagram that showed her lounging in bed in a sexy dress with Scott and Reign sitting next to her.

“Kourtney is not going out of her way or trying to hurt Sofia,” by posting pics with Scott, the source told HollywoodLife EXCLUSIVELY. “She’s just living her own life and isn’t giving it much of a second thought. She can’t help but feel some type of entitlement when it comes to her relationship with Scott since they were together for so long, have three children, and will always be in each other’s lives no matter what. She can’t spend her life worrying about what Sofia thinks or her insecurities; she’s just doing her own thing and living her best life.”

Sofia’s not happy, even if Kourtney swears up and down that her intentions are good. Scott’s still her boyfriend, after all! “Sofia is confused by the unnecessary pics and feels they are rude, inappropriate and wishes Kourtney would back off from her man,” a source close to the model told HollywoodLife EXCLUSIVELY. Of course, Kourtney isn’t the only person to blame here. Sofia’s upset with Scott for disrespecting her, as well. “It’s a slippery slope because Kourtney will be in their lives forever so Sofia is trying to come to a place with everyone so no one gets upset,” the source said.

HollywoodLife reached out to Kourtney’s rep for comment but did not immediately hear back.

‘The Marvelous Mrs. Maisel’: Season 2 Ends with a Risky — and Necessary — Reproach