Kaitlyn Bristowe And Jason Tartick’s Full Relationship Timeline, From ‘The Bachelorette’ To Now

Although Kaitlyn Bristowe and Jason Tartick were contestants on totally different seasons of The Bachelorette, that didn’t stop them from becoming one of the cutest Bachelor Nation couples ever. From their very first date to their regular engagement updates, Kaitlyn and Jason are the definition of #relationshipgoals.

But it wasn’t always smooth sailing for the happy couple. After Kaitlyn’s season ended, both she and Jason had to tend their own broken hearts. Kaitlyn was reeling from her breakup with fiancè Shawn Booth, and Jason was regrouping after his journey with Becca Kufrin was cut short. Luckily for these two, they both happened to be in the right place at the right time, and Bachelor Nation saw the rest unfold over an adorable few years.

Here, look back at Kaitlyn and Jason’s greatest (and not so great) moments, from 2015 to now:

The 11th season of the Bachelorette kicked off with a bang (there were two Bachelorettes, ICYMI) and ended with Kaitlyn’s engagement to contestant Shawn Booth. The personal trainer got along so well with Kaitlyn that he won her heart in the final episode, with a Neil Lane ring to match. 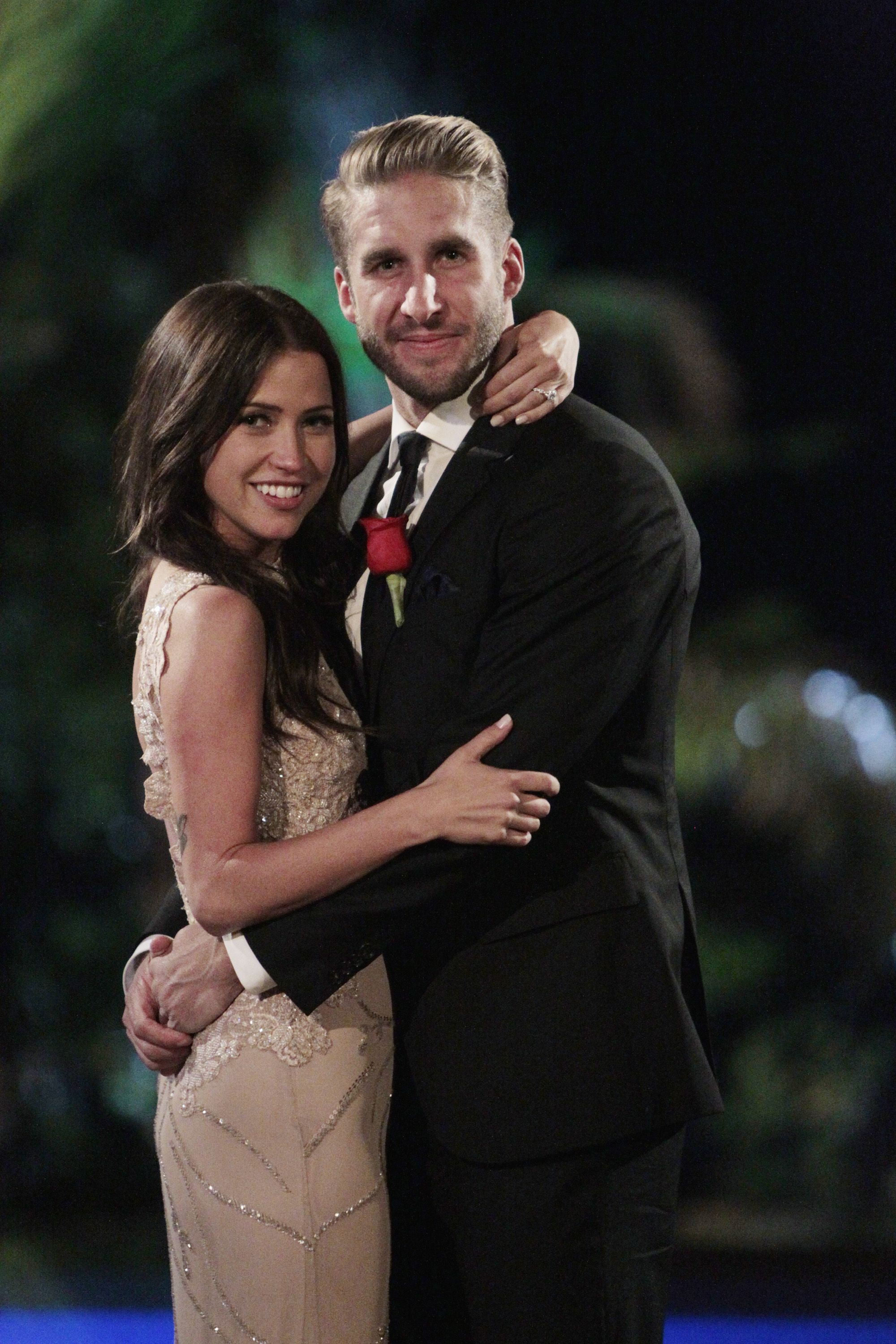 A few years later, Kaitlyn and Shawn called it quits. “After three incredible years, we have decided to go our separate ways. This difficult decision comes after thoughtful, respectful consideration,” the couple said in a joint statement to Us Weekly. “Even though we are parting as a couple, we’re very much committed to remaining friends.”

“We have both evolved as people, which is taking us in different directions, but with the hope that we will continue to support each other in new ways,” the statement continued. “Due to the nature of how we met, our relationship has always been very public, and we have enjoyed sharing it with all of you, but we ask that you respect our decision and our privacy at this time.” And with that, the couple was no more.

January, 2019: Kaitlyn and Jason meet while taping an episode of Kaitlyn’s podcast.

Kaitlyn and Jason first met when Jason appeared as a guest on Kaitlyn’s podcast, Off the Vine. After the episode was over, Jason summoned up some courage and asked Kaitlyn out on a date, per Entertainment Tonight. He couldn’t stop gushing about her! “She is a down-to-earth, beautiful woman who has a great sense of humor. She seems very strong and knows what she wants and empowers women,” Jason told ET.

So, love at first pod, basically. The couple shared snaps from their first few dates on Instagram, too: 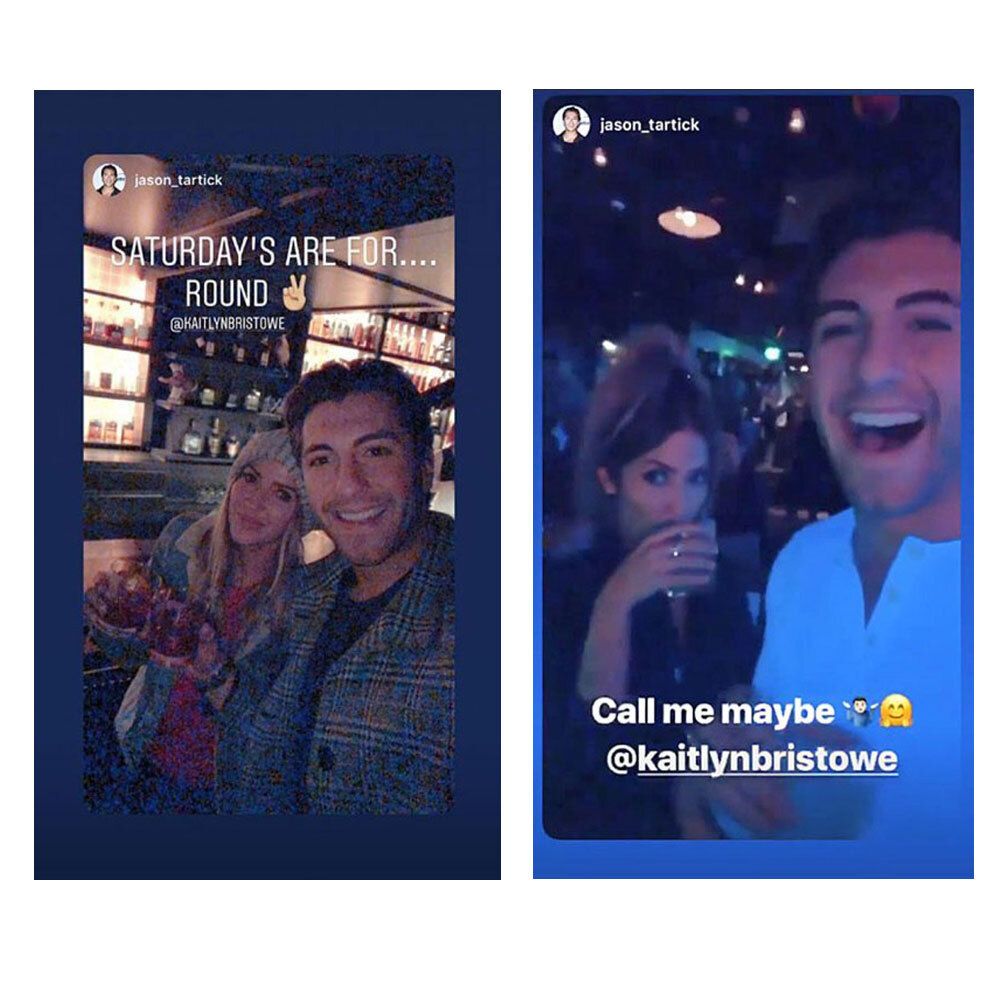 January 17, 2019: Kaitlyn calls Jason her boyfriend on her podcast.

Only a few weeks go by before Kaitlyn and Jason seem to be getting more serious. She officially calls him her boyfriend on her podcast, saying “It’s actually so strange to go from being engaged to thinking of someone as your boyfriend because I feel like that’s taking a step backwards—it’s not. It’s not.”

Kaitlyn’s ex Shawn had lots to say on an episode of Ben Higgins and Ashley Iaconetti’s podcast, Almost Famous. “[I’m] trying to understand things right now,” he said. “I guess this goes with her new relationship too. It just kind of makes me question everything that we’ve had. So I think that’s one of the major questions that runs through my mind—just trying to understand that, which I think is tough to understand.”

Guess he felt a little salty.

When you know, you know—and Jason definitely knew. Just a few days later, he went on The Today Show to make their relationship official. Here’s the adorable clip, in case you’re curious:

Right around Valentine’s day, Kaitlyn posted a super sweet tribute to her new beau. “Trust me when I say — the greatest thing you will ever do for yourself is to simply listen to what you actually want from life,” she wrote in a massive caption underneath a picture of the two at what looks like a dinner date. “Thank you @jason_tartick for being you.”

Then, Jason posted his own love letter to Kaitlyn. “So grateful for you ❤️,” the caption read, and the picture of the pair hugging is beyond cute.

On yet another episode of Off the Vine, Kaitlyn and Jason got candid about their first hookup, which happened while Kaitlyn was on her period. “I was like, ‘Yo, let’s just dry hump.’ So we did,” she said. “Literally, I had pants on. We were fully clothed and hot and heavy…in five minutes, he picked my nose and gave me an orgasm.” Awe.

Kaitlyn announced the big move in an Instagram caption that read, “Oh hey roomie 😉.” Unsure if I’ve ever seen a cuter photo.

Then, three days later, the pair expanded their little family by adopting a Golden Retriever named Ramen. “You’re home and I am crying @ramenthegoldennoodle
thank you @freshprinceofbuhlaire for capturing this moment and thank you @bunnysbuddies for what you do,” Kaitlyn captioned the video of her first time meeting Ramen.

Six happy months later, the couple is still going strong—so strong that they adopted a second Golden Retriever for Ramen to pal around with. Kaitlyn and Jason celebrated by posting all about the good news. “They snuggle, and don’t leave each other’s side,” Kaitlyn wrote in a caption. Sound familiar?

Kaitlyn explains that she feels ready to get engaged soon, but says she doesn’t want a quarantine ring. “[It’s] the healthiest relationship I’ve ever been in and [an engagement] just feels like the natural next step,” she told Us Weekly. “I told him I don’t want to [have a] quarantine engagement. [I want] a little more romance than just at the house.”

In the greatest television proposal news that sadly will never be, Jason said he passed on the chance to propose to Kaitlyn on the small screen. He mentioned that the producers from The Bachelor: The Greatest Seasons—Ever! extended the offer. “They actually came to me asking me if I’d like to take this opportunity to propose,” he told Entertainment Tonight.

Supposedly, there was “no pressure” and the show wanted to “make it special,” but Jason turned them down. He didn’t like the idea of proposing during an episode that focused on Kaitlyn’s exes. “But I told Kaitlyn after…she’s like, ‘Thank God [you didn’t agree],” he said.

On another episode of Off the Vine, Dancing With the Stars contestant Kaitlyn shared her thoughts on motherhood. “I feel very proud of myself and where I’m at and what I’ve accomplished, that I genuinely have always wanted to be a mom,” she said. “And that is such a full-time job, that, I mean I’m 35, and I’m like, wait, are you ready? I’m going to have a little girl, I already know her name—we are going to have a little girl.”

Jason, on the other hand, sounded more like the voice of reason. “In a perfect world, I would want you to be pregnant after we get married,” he said. “The reason I prefer that we were married…I think that for my kids, not that it’s right or wrong—if things happen, they happen—in an ideal world, in a perfect case scenario, I think I would want my kids to be married before they have kids. The idea is that you have a fully committed partner, that you two have committed your lives and you gave each other’s vows to one another.”

The pair got to spend Christmas together in quarantine as both of them tested positive for the coronavirus. They broke the news on Instagram underneath a photo of their matching sweats: “Unfortunately, this is our Christmas card this year. We have Covid 😭,” Kaitlyn wrote in the caption. “Jason and I had been trying to quarantine before seeing family. We thought we were making a responsible decision to have ONE person over, who had been tested daily for work. Negative tests 4 days in a row. The day we saw her, she became positive which we all found out the next day.”

“Now, like many, we will spend Christmas by ourselves. We just want to let everyone know that we thought we were being safe, but covid is bigger than us. Today, We are thinking of everyone who is spending the holidays alone, anyone who is sick or overcoming something, (as 2020 has taught us to overcome a lot), and all of the healthcare workers who have been away from family, taking care of others for months, and months now. We will be ok!! Be safe and happy holidays!!”

Bachelor Nation fans everywhere gasped when Kaitlyn uploaded a photo that seemed to confirm her split from Jason. She posed with Ramen and Pinot in front of a background that read “Single AF,” and followers were immediately concerned.

Kaitlyn posted a bunch of videos on her Story to clear things up. “So I posted a picture and in the background it said ‘Single AF’ and I didn’t even notice…” she said, per E! News. “So people thought it was hinting toward something, but it’s not. So then I put on my Stories that if you zoom out, it also says ‘Engaged AF,’ basically to say don’t take it seriously. So now people think I’m engaged, and they think I’m single.”

The happy couple finally got engaged just a few months ago. Kaitlyn told Entertainment Tonight all about Jason’s clever proposal plan. “Jason’s like, ‘Kaitlyn, we’re not doing a podcast.’ And I’m like, ‘You forgot to hit record, didn’t you!'” she said.

“He was like, ‘No, this is something else,’ and he got up and I saw him bring out a ring box from the drawer….I was trying to be present, but I was so overwhelmed and I was so embarrassed, because I was wearing a T-shirt that said, ‘Tequila for Breakfast.’ I was like, ‘This feels very on brand but also very inappropriate!'”

“It was everything I could have asked for,” Kaitlyn continued. “The words that came out of his mouth were insanely beautiful. We’ve never locked eyes like that in our lives. We were holding hands, so intense, and I was listening to his every word but still blacked out.”

The couple has already confirmed that wedding planning has begun, so it’s just a matter of time before they tie the knot!

Carol Vorderman: Countdown star admits she’s ‘not sure’ husband ever proposed to her