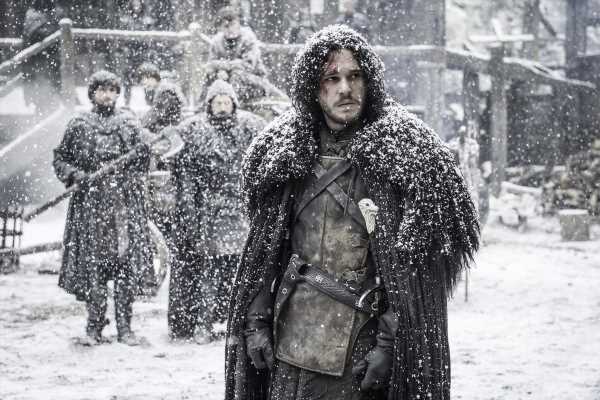 Game of Thrones has never shied away from killing off pivotal characters. Ned Stark’s beheading all the way back in Season 1 is proof of this fact (and let’s not even get started on the Red Wedding). And now that the series is officially coming to a close, the body count is sure to be higher than ever before. No one is safe at this point, but the signs that Jon Snow dies in Game of Thrones Season 8 feel particularly significant and should be enough to make fans very worried for his fate by the time those series finale end credits start rolling.

Life has never been easy for Jon. Growing up in Winterfell as Ned Stark’s bastard, he never really felt as though he fully belonged. He knows nothing (heh) about his true heritage and that he’s actually the son of Rhaegar Targaryen and Lyanna Stark, thereby giving him arguably the strongest claim to the Iron Throne. And while some may think that could help to solidify his safety, it also makes him a big target to both Cersei and even Daenerys. But even if you leave that aspect out of it, the King in the North doesn’t stand a chance of making it out of this story alive, and here’s why…

Jon may be half Targaryen, but he’s also half Stark, which doesn’t bode well for his chances of survival. Aside from him, Bran is the only other remaining male Stark in Winterfell, and he’s technically the Three-Eyed Raven now so even that doesn’t really count. All the rest of the Stark men are dead and Jon could very well end up meeting the exact same fate.

2. He’s More Than Willing To Sacrifice Himself For Others

Jon has proven time and time again that he’d happily set aside his own life if it meant saving the people he cares about. It’s heroic, sure, but it’s also the equivalent of a death wish, especially on a show like this.

3. He Doesn’t Want To Be Resurrected Again

Some fans may think that the series didn’t bring Jon Snow back to life in Season 6 only to kill him off again two seasons later. And while that’s a fair point, it’s important to remember that Jon directly told Melisandre that he doesn’t want her to bring him back if he ends up dying again. So if something does happen to him this time around, it’ll be for keeps.

4. The Night King Has It Out For Him

These two have met numerous time before. The Night King even looked directly at Jon during the Hardhome battle, almost as if he recognized who he was. And when the Army of the Dead leader has your number, your time in this world may prove to be very short indeed.

5. The Latest Teaser Hints At His Demise

Granted, given all the clues found in the aftermath of the Battle of Winterfell, one could argue that it hints at almost everyone’s demise, but still. Seeing his sword Longclaw lying alone in the snow without its owner isn’t a good sign, that’s for sure.

6. A Promo Showed His Statue In The Stark Crypt

One of the very first promos to come out for Season 8 centered around Sansa, Arya, and Jon walking through the Stark family crypt at Winterfell and coming across their very own statues. Sure, it could be serving as some sort of symbolism, but on the other hand, it could be hinting that none of these three Starks will make it out of this season alive. After all, you aren’t given a statue until you’re dead.

7. He Leads With His Heart, Not His Head

Jon may be a fierce warrior, but he’s also kind and trusting and honorable. And while these may be noble qualities to have, they aren’t too helpful in the ways of survival.

Truth be told, everyone’s fate is looking pretty grim at this point, but when it comes to the former Lord Commander of the Night’s Watch, his future feels particularly dark and full of terrors.

CategoryLifestyle
Tags— face is It Jon Just not snow

Kim Kardashian and Kanye West Relax and Feed Elephants During a Trip to Bali — See the Photos!