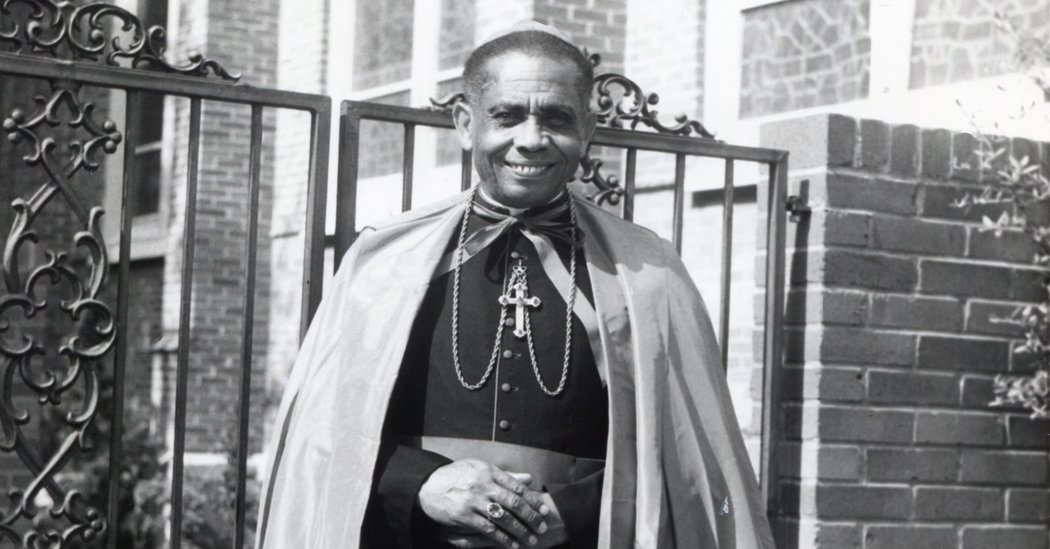 Joseph Howze, the first African-American bishop appointed to preside over a Roman Catholic diocese in the 20th century and an advocate for blacks within the church, died on Jan. 9 in Ocean Springs, Miss. He was 95.

His death was confirmed by Terrance Dickson, a spokesman for the Diocese of Biloxi, Miss., which Bishop Howze led from 1977 to 2001.

Before Bishop Howze, the only bishop known to be of African-American descent to lead an American diocese was James Augustine Healy, who became bishop of Portland, Me., in 1875.

Appointed by Pope Paul VI, Bishop Howze had the task of expanding a predominantly white diocese in the Deep South. Though he was apprehensive on arriving in Mississippi in the early 1970s, as an auxiliary bishop for the Diocese of Natchez-Jackson, most parishioners accepted him, he said, despite the state’s history of racial unrest.

“Like everyone else, I had an opinion of what Mississippi was like,” Bishop Howze told The New York Times in 1977. “But I was told things had changed in the state, and indeed they had.”

When he moved to Biloxi, there were only about a million African-American Roman Catholics. Today, they number about 3 million out of a total of roughly 71 million American Catholics, according to the United States Conference of Catholic Bishops.

In Biloxi Bishop Howze took on the delicate task of explaining black people’s grievances to the church authorities without alienating them. He pushed for more black people in leadership positions and for greater recognition of black culture by the church, arguing that such measures would attract more African-Americans to the faith.

By 1985 there were 10 black bishops in the United States, and that year he read a statement on their behalf at a gathering of Catholic bishops, declaring that “many black Americans still feel unwelcome in the Catholic Church.”

“There is evidence that just as some white Americans continue to feel that to have black neighbors, black co-workers and black classmates will be disruptive of their value system and their familiar patterns of life,” he continued, “some white Catholics feel that it will be equally disruptive to share the Scriptures, the Bread of Life and the Cup of Salvation with black Catholics.”

He relayed that message directly to Pope John Paul II in 1987 during a papal visit to New Orleans before an audience of 1,800 black Catholics in a Superdome auditorium. “Racism,” he said in his remarks, “is a major hindrance to full development of black leadership within the church.”

The next year, John Paul elevated the first African-American archbishop, naming Eugene Antonio Marino to lead the Archdiocese of Atlanta.

Lawson Howze was born to Albert and Helen (Lawson) Howze on Aug. 30, 1923, in Daphne, Ala., on the Gulf Coast near Mobile. He grew up Baptist.

After graduating from high school in Mobile, he studied science and education at Alabama State University in Montgomery, earning his degree in 1948. He then taught science at a Mobile high school, where a student piqued his interest in Catholicism; he was baptized into the church with the name Joseph that year.

He studied for the priesthood at seminaries in New York State and was ordained in 1959, then served as the pastor for several North Carolina parishes. He was named an auxiliary bishop for the Diocese of Natchez-Jackson in 1973.

Bishop Howze, who lived in Gautier, Miss., is survived by a sister, Carmen Swain, and a brother, T. C. Howze.

Though he was his century’s first black Catholic bishop, that distinction was never uppermost in his mind, he said.

“I never think about race when I’m doing my work,” he told an interviewer for a University of Southern Mississippi oral history in 1999, because, he said, the Catholic message was universal.

“I’m a bishop to the Vietnamese, to the Hispanics, to the French, to the Germans, to the blacks, to the reds, to the whites,” he said. “You’re a bishop to everybody.”