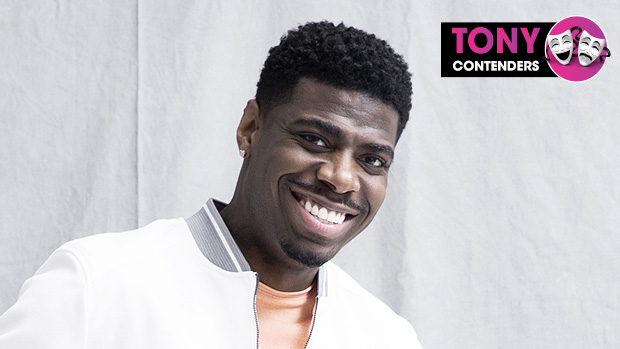 Jawan M. Jackson Brings ‘The Bass’ To Story Of ‘Love & Brotherhood’ In ‘Ain’t Too Proud’

He’s all about that bass! Jawan M. Jackson is one of the breakout stars of Broadway’s ‘Ain’t Too Proud’ as the late Melvin Williams.

As of the most iconic and notable voices in Motown, The Temptations’ Melvin Williams is remembered for his kind spirit and goofiness. “Melvin was everybody’s best friend,” explains Jawan M. Jackson, who plays the bass singer in Broadway’s Ain’t Too Proud. “Smokey [Robinson] was telling me a story about how every year it would be a tie between he and Melvin for almost like the ‘class favorite’ of Motown. Everyone loved Melvin and Smokey.” When it came to bringing the story of the original Temptations to the stage, there was no other option than tapping Jawan for the role, as he had played Melvin in his Broadway debut in Motown: The Musical in 2013. “It’s an honor and a privilege to be able to do it a second time,” Jawan admits. He carries the late singer around with him everywhere in the form of a blown-up Motown Identification Card, hooked onto his backpack. “His wife gave it to me,” he notes, “I have the actual card at home, and I have another copy of that, take around in a smaller version, just to keep Melvin with me at all times.”

HollywoodLife: How did it come about that Melvin’s wife gave that to you?

Jawan M. Jackson: I met her in LA. She came to the show from there it was an instant connection. You know how you meet somebody and you’re like, I feel like I’ve known you more than just today? We just connected. She took me out to dinner with her sister, who Melvin actually helped raise, and they gave this to me. It was really the first person, aside from Otis [Williams], that knew him, knew him, especially as intimately as she did. She’s just been a jewel in my life. We still keep in contact, she texts me, we’ll call each other.

HL: What was her reaction to seeing you as Melvin? I’m sure it was emotional.

JJ: It wasn’t weird, she just embraced me and said, “You would have thought you knew him your whole life. I saw my husband up there. You talk like him, you move like him. It was just everything.” It was the highest compliment. I got a video of our first encounter that the cast took, and we’re just crying with each other. Like, I just boohooed like a baby. You always get nervous when family members and people who knew these men come, because you want to do it right.

HL: Because Melvin is no longer here, do you feel like you have even more of an obligation to get it right?

JJ: I do, but the thing is that we all have Otis, so if he saw something wrong, he’d give us tidbits to add onto our performance, but never take away. I do hold a great responsibility to show Melvin in a great light, and to carry his story out to people who don’t know him. I’m happy to keep their legacy continuing forward.

HL: What’s the most surprising thing you learned about Melvin when going through the process?

JJ: I think the most surprising thing was actually the extent of his arthritis, because he died of rheumatoid arthritis, and the sacrifice he made for the group while he was going through this ailment. I was talking to Shelly Berger and he told me that Melvin would fly to Miami on a weekly basis to get gold shots, and they would plan the tours around him being down there. Once he got those shots, it would wear on his body before he could go out and perform. So, that sacrifice because he wanted to do this, he wanted to be a performer, he wanted to entertain, he wanted to bring joy to peoples’ lives. He made the ultimate sacrifice, and he put his body out there and sacrificed his body for the art.

HL: Wow, do you do anything particular on stage to show that struggle with the disease?

JJ: No. I made it my job not to be obvious. There are moments where you’ll see me doing subtle things, like touching my arm, my hand, or rubbing my knee. It’s not as apparent, because I just think that’s not what it was. We wouldn’t have known, it didn’t define him.

HL: What did Melvin bring to the Temps that others didn’t?

JJ: With no Melvin, it would be a group with just trouble! Melvin brought the foundation, Melvin brought the heart and soul of that group. He was the actual final piece that it needed to tip it over the edge. The bass is one thing that is the unsung hero of all the other parts. The brass instruments always get all the accolades and all the shine, but the lower instruments there, you don’t realize the brass doesn’t work without the lower. And so, Melvin, for me, was the glue that put the group over the edge. Also, he had the weight of the group on his shoulders with his low voice, his resonant sound, his memorable sound.

JJ: One, it’s the Temptations. Two, their music is great. Motown is timeless, that whole era is just legendary, so you’ll always have a hit with that. And three, Dominique Morisseau, who’s our book writer. She wrote a story that I think stands today, and back then. Even if you don’t know what the story is, you leave feeling charged to make a difference because you realize the exact same thing they were going through then, is the exact same thing that’s happening in the world today. It’s eyeopening experience for us and for the audience member who comes to experience the show. Maybe you seeing it and enjoying it will make you think twice about how you go about being an everyday citizen.

HL: What’s your absolute favorite part to perform in the show?

JJ: I think it’s two moments. Definitely “Cloud Nine,” my favorite number to perform. Even though it’s high-energy and it’s a dancy, dancy scene, and I’m not a dancer, that’s my favorite number. I think because it’s my favorite song, too. So that, and “I’m Losing You,” when Ephraim [Sykes] is singing, and it’s just squalling, plus to just to hear the audience reaction. “Just My Imagination,” when Jeremy is singing and he hits this soaring high note, and everybody’s like, “Wait a minute, we had no idea!” It’s just a beautiful moment.

HL: Did you feel pressure to try to replicate Melvin’s voice, or do you make it your own?

JJ: The thing is we know we’ll never sound like The Temptations. We try to stay in our singing and our stylized things that we do. I try to reference the original tracks what Melvin does, and I know every lick, I know every note. But, with Melvin, I try to push myself, because I’m like, ‘Melvin, I love you, but I’m actually going to try to sing that lower that what you did.’ You try to top yourself, but still staying true to the music, still staying true to the structure of what the song was, not to go astray. People are coming, and they know the music through and through. So, the moment you start changing things up, they’re going to call you out on it. We try not to stray too far that way, we want it to feel like a concert.

HL: Why should people see Ain’t Too Proud?