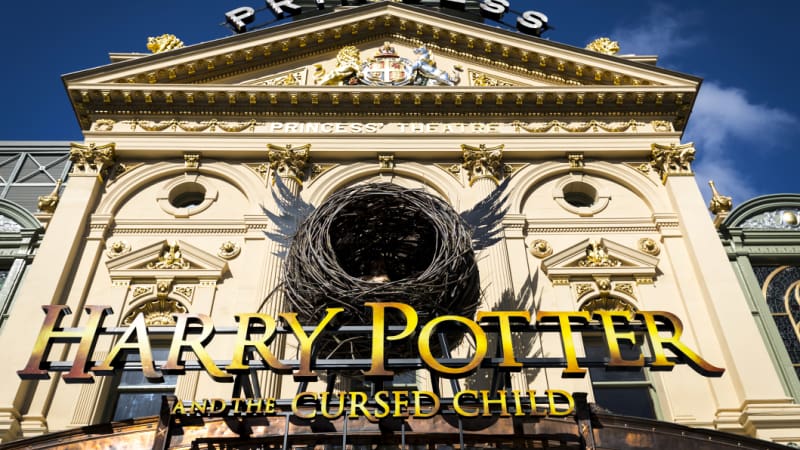 In February, Melbourne will become the first city in the world – outside of London and New York – to host Harry Potter and the Cursed Child.

Why us? Our love of live entertainment put us in the running for the blockbuster stage show, but it was the historic Princess Theatre that sealed the deal. 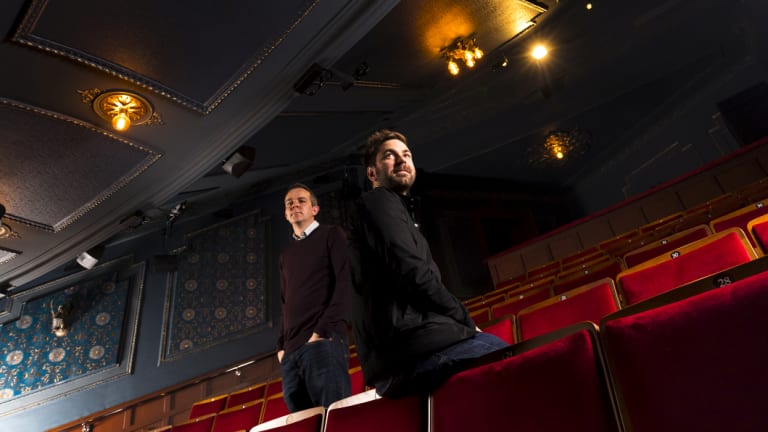 Brett Banakis, scenic supervisor of Harry Potter and the Cursed Child, and technical director Gary Beestone, have revamped the Princess Theatre for their show.Credit:Chris Hopkins

A mid-sized theatre such as the Princess, with its 1880s facade and 1920s interior, fit the bill perfectly. Well, almost – Beestone has tweaked nearly every inch of the auditorium to his satisfaction. A richer shade of red carpet has been laid, the walls are now grey and crystal light fittings have made way for dragon-shaped lanterns.

When the show leaves town, these changes will be reversed. Fortunately, the new seats – installed as part of a major restoration, to be unveiled on opening night – are here to stay. Custom-made in the UK, they’re luxuriously padded in crimson velvet. A better layout allows more leg room without reducing the 1400-odd capacity. 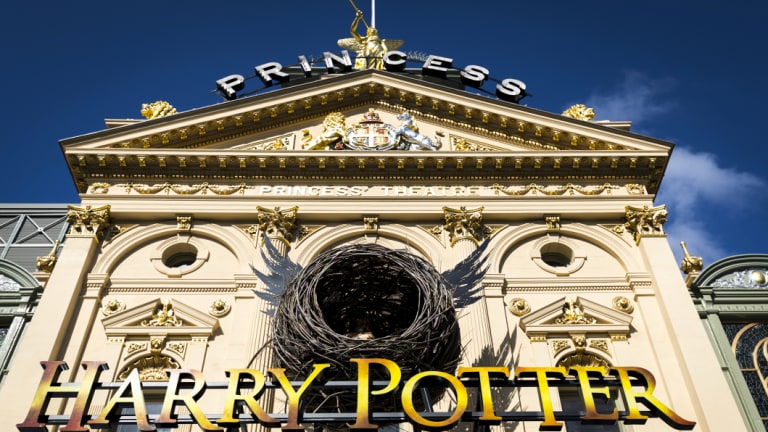 Audiences for Harry Potter and the Cursed Child will be the first to see the restored Princess Theatre.Credit:Chris Hopkins

"It’s arguably the best theatre chair in the world," says proprietor Jason Marriner, whose family-run company also operate Melbourne's Regent, Comedy and Forum venues. "For an old building – and this is older than any theatre on Broadway – that's impressive." 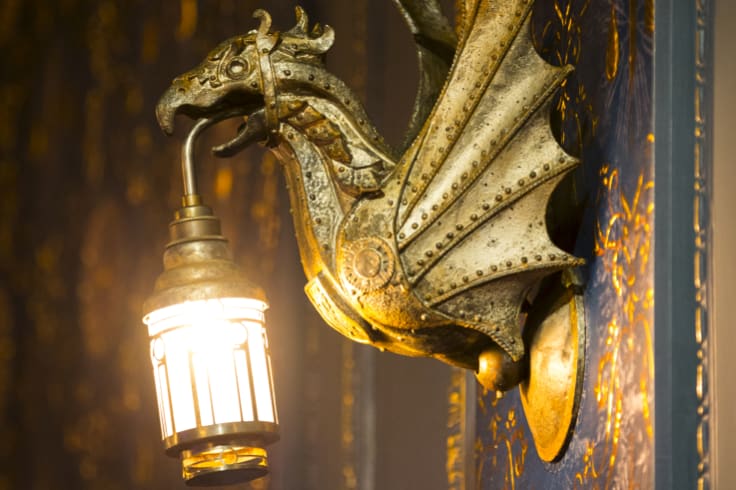 Now 132 years old, its heritage protections limit the scope of any renovation. Marriner embraced this challenge, using modern science to return to the past.

A forensic analysis, for instance, revealed the building's true colour. During its last major restoration, in 1989, designers uncovered the "original" shade of paint, not realising it had yellowed with age. This resulted in the wrong hue being applied to the exterior.

"Because it's organic, it actually changes throughout the day. In bright sunlight, it's a flat white colour but in the early evening, it takes on a beautiful golden colour. It even looks different when it's humid." 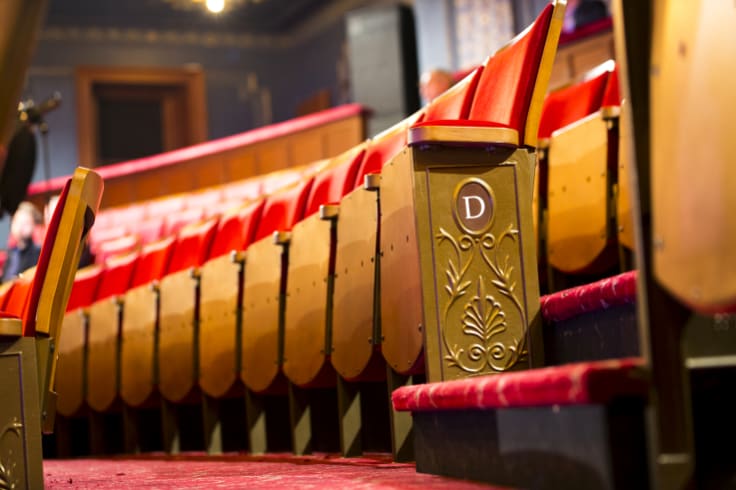 In preparation, old coats of paint were carefully removed, one by one. The final layer yielded a surprise: a Princess Theatre sign, painted in 1886, above the front doors. "We're restoring it to look as beautiful as it did 132 years ago," Marriner says.

He also spent a small fortune on several kilograms of 24-carat gold, returning the rooftop angel and two lions to their lustrous prime.

It's as close to the original facade as modern Melburnians have seen – except for the colossal winged nest above the awning.

Weighing almost a tonne, it's virtually identical to the nests that greet Cursed Child patrons on Broadway and the West End.

While the play was in still development, producers considered computer-generated trickery to impress audiences.

"But we realised we didn't want to compete with the Harry Potter films," says Brett Banakis, international scenic supervisor. "Instead, we've put a huge amount of effort into old-fashioned theatre craft, to make everything feel analogue and handmade." 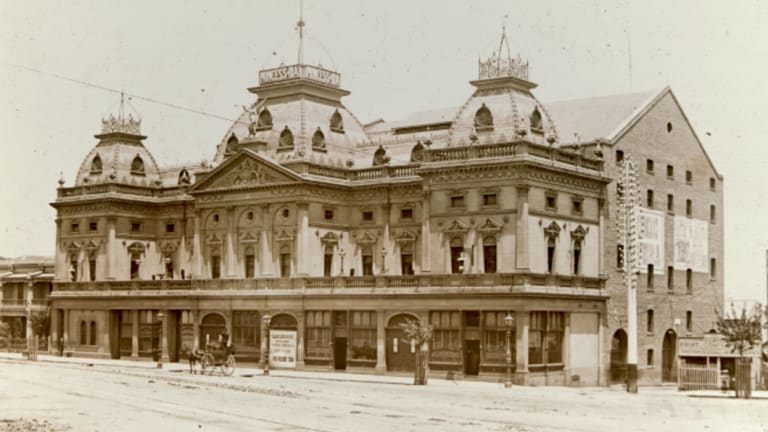 Melbourne’s Princess Theatre in 1887, one year after it opened.

Banakis is bound by the show’s #keepthesecrets campaign, which asks patrons not to reveal plot details or special effects. The most he can say is that certain technical feats will leave audiences stunned.

Unlike the Harry Potter movies adapted from JK Rowling’s novels, Cursed Child is a new two-part play, written by Rowling, Jack Thorne and John Tiffany. It picks up where the epilogue of the final novel in the series, Harry Potter and the Deathly Hallows, left off; 19 years after the Battle of Hogwarts.

Split across two instalments, fans are encouraged to see both in the same day or on consecutive evenings.

"The show is so big, it's been built into the very bones of this theatre," Marriner says. "It literally cannot move. If you want to see it, you have to see it in Melbourne."

Previews for Harry Potter and the Cursed Child begin in January. Tickets at harrypottertheplay.com/au/

CategoryLifestyle
Tagsfor It Magic me More than took