Home » Lifestyle » Is Mohamed Hadid ‘Too Broke’ to Tear Down Bel Air Mansion? 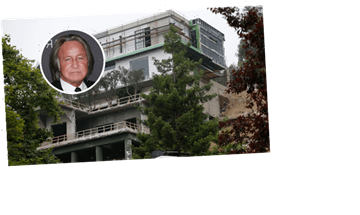 Is Mohamed Hadid ‘Too Broke’ to Tear Down Bel Air Mansion?

In the most surprising turn yet in a case stuffed with bizarre plot twists, internationally famous property developer Mohamed Hadid — the Rolls Royce-driving father of top model-influencers Bella and Gigi Hadid — doesn’t have the money to tear down his partially-built Bel Air mansion, according to his attorney Bruce Rudman. The revelation comes just days after city officials filed a motion requiring Hadid to demolish the structure.

At this point, the 71-year-old developer has been involved in contentious litigation related to the unfinished house for well over five years. He bought the property in 2011 with the intention of building a 14,000 sq. ft. modern home; by 2014, however, the project had somehow swollen to 30,000 square feet of megamansion-sized space in a 70-foot tall, six-story structure — all without the proper permits, according to neighbors, who were livid that Hadid flagrantly ignored stop-work orders on the swollen hillside manse and destabilized the hillside above their homes with his construction.

No fewer than five of Hadid’s neighbors have either sued him or given public interviews harshly criticizing him and his mansion project, which they’ve sardonically christened the “Starship Enterprise.” Shortly before her death, wheelchair-bound former singer Carole Cramer spoke to the Daily Mail, accusing Hadid of telling her gardener she was a “bitch.” And in 2016, multibillionaire Walmart heiress Nancy Walton Laurie demanded $90,000 from Hadid, alleging his construction damaged the roots of her “cherished” eucalyptus tree, something he disputed.

But Hadid also dealt with far graver legal matters. In 2016, he pled no contest to criminal charges related to the illegal construction, and was sentenced to 200 hours of community service. He was also accused of bribing an L.A. city inspector in connection with the project, which eventually led to an FBI probe.

And despite his alleged money woes, Hadid — who maintains a close friendship with Lisa Vanderpump and occasionally pops up on the “Real Housewives of Beverly Hills” — managed to buy a $4.5 million house in the mountains above Beverly Hills earlier this year. He’s also built a number of other palatial spec-homes in the area, including the aptly-named Les Palais in Beverly Hills, which was sold for $32 million in 2013 to Lola Karimova-Tillyaeva, the younger daughter of Uzbekistan’s former president Islam Karimov. All of that has led neighbors to sarcastically label his newfound cash flow troubles “amazing.”

Of course, it’s hardly the first time a Hadid statement has been treated with skepticism. Though he claimed to have completed his 200 hours of community service last year, documents accused the embattled developer of shirking his court-ordered duties by having his security guard secretly complete them in his stead. “He’s a liar,” Carole Cramer said about Hadid.

Still, Hadid appears to be keeping at least one of his promises. “Demolish this house? Never!” he told Town and Country in 2017. “This house will last forever. Bel Air will fall before this house will.”

‘The Kelly Clarkson Show’ Renewed For Season 2 By NBCUniversal