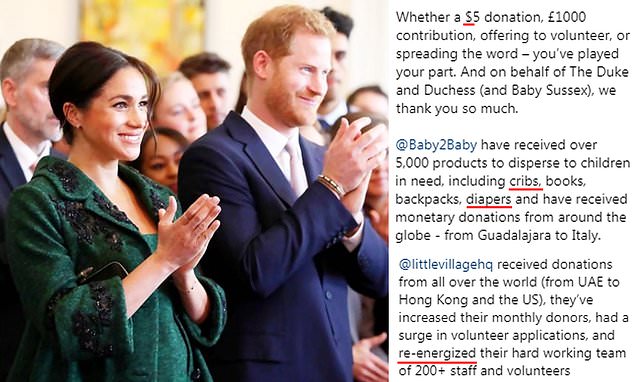 Is Meghan running the SussexRoyal Instagram account? Eagle-eyed fans claim American spellings and phrases prove the Duchess is writing the captions herself

The Duchess of Sussex is eagerly awaiting the birth of her first child, but eagle-eyed royal fans are convinced that, rather than putting her feet up, Meghan is busy on social media.

Royal watchers have gone into a frenzy after spotting captions on the new @SussexRoyal Instagram account that they believe have been written by Meghan.

Fans fans have been quick to spot Americanised spellings, as well as dollar signs and American English in the captions, and claim this points to a US native writing them.

Meghan, 37, and Prince Harry, 34, recently thanked fans for donating to their chosen charities in honour of Baby Sussex, and one post about Baby2Baby contains references to ‘cribs’ and ‘diapers’.

Another post uses the US spelling ‘organization’, rather than ‘organisation’.

Before she was the Duchess of Sussex and began dating Prince Harry, Meghan  amassed millions of followers on social media, and loved interacting with her fans.

The Sussex Royal account regularly posts photographs of the royal couple, but the captions are providing clues that they could be penned by an American author 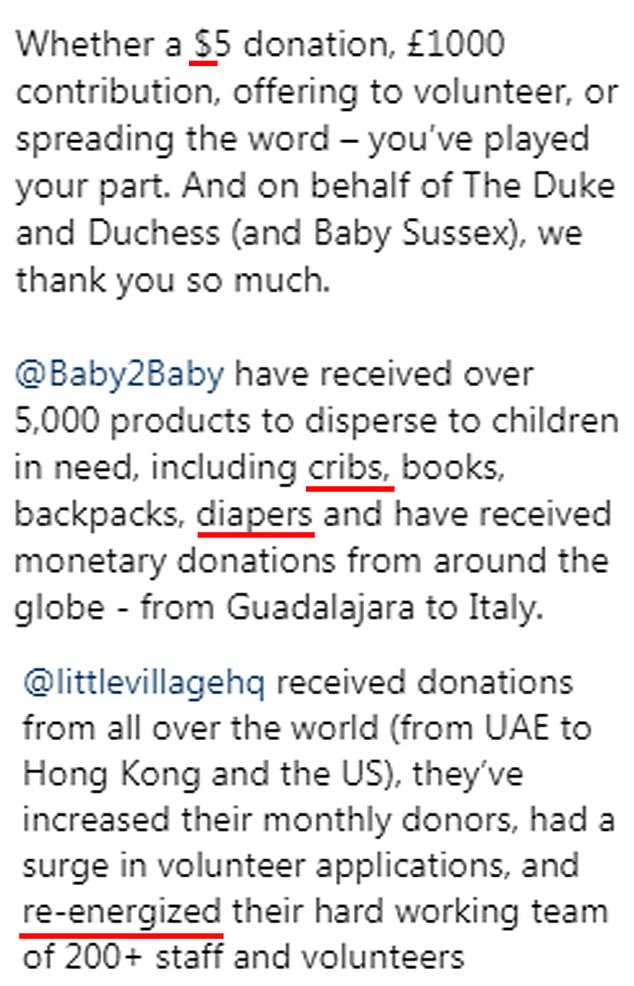 The former Suits star often posted on pictures of her doing yoga, cuddling her dogs and enjoying a glass of wine on her Instagram account.

In January last year when she shut down her profile, she released a statement via Kensington Palace, saying she was ‘grateful to everyone who has followed her social media accounts over the years’.

At the time, she’d posted over 2,000 times and had millions of followers.

Fans are sure there are several clues as to whether Meghan is controlling the new Sussex Royal account, which so far has a total of 12 posts in just two weeks. 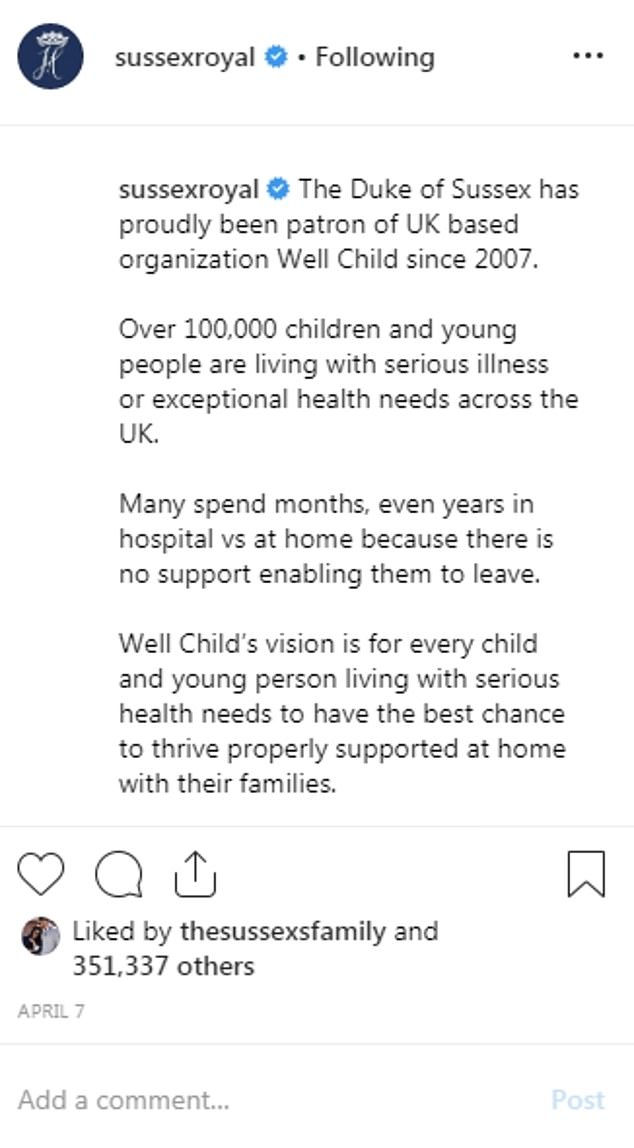 Meanwhile in the above post, the author refers to ‘organization’, which is an Americanised-English term that differs from the English word ‘organisation’

The account, which follows the work the royal’s do for charities, patronages and any work engagements, has regularly posted in support of ‘organizations’, the Americanised-English spelling of the English word ‘organisations’.

And it’s not the only word which points to an American author – in the latest post, which thanks supporters of some of the royal’s favourite charities, the occasional American spelling crops up, including ‘re-energized’ instead of ‘re-energised’.

Both spellings of these words can be used in Britain, but the more common way in British English is ‘energised’ and ‘organisations’ with an ‘S’.

The recent post is perhaps the most heavily Americanised, and refers to baby essentials such as ‘diaper’ and ‘crib’ as opposed to words that English people tend to use, like ‘nappy’ or ‘cot’. 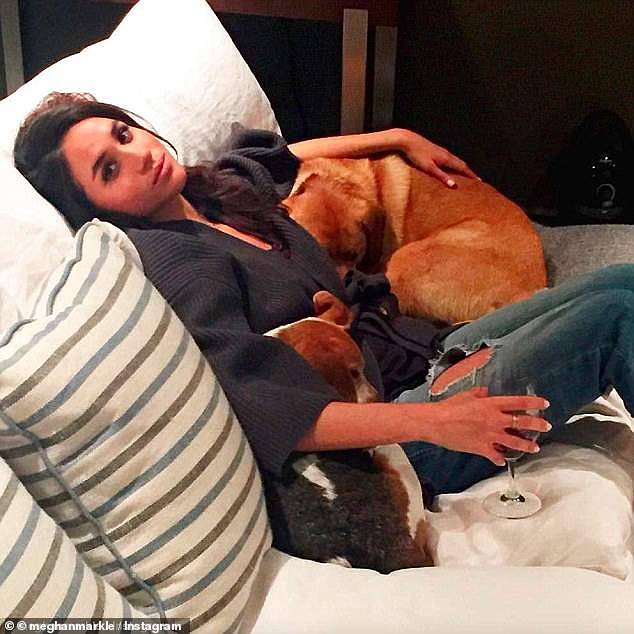 Before Meghan became the Duchess of Sussex, she ran a successful Instagram account that had over 2,000 posts and 3 million followers. She shut the account when she began seriously dating Prince Harry 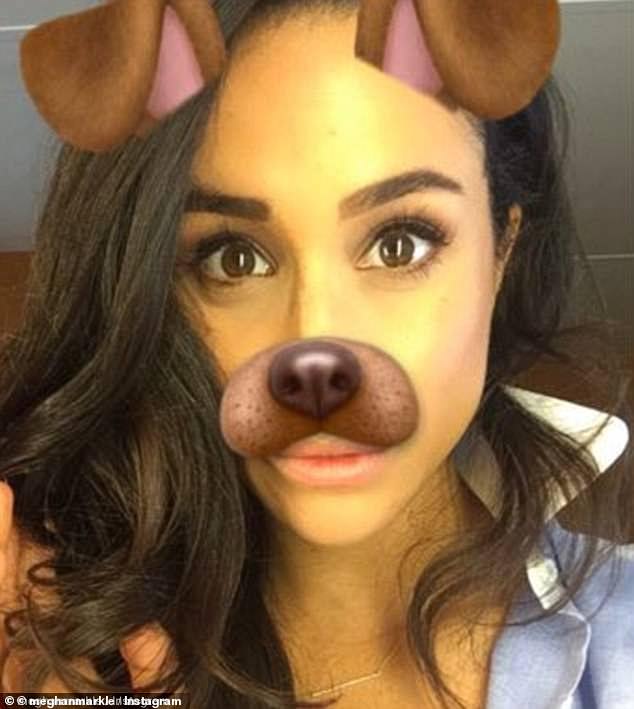 Before she began dating Harry, Meghan would regularly post on her own social media and interact with fans and followers

The person writing the caption also used a dollar sign instead of a pound sign, which could indicate a clear slip from the author.

Since the SussexRoyal account has been launched, commentators have suggested that the Duke and Duchess may use it to post the first pictures of Baby Sussex.

And it was also reported last year that Meghan had a ‘secret’ Instagram account in order to keep up with friends and family. 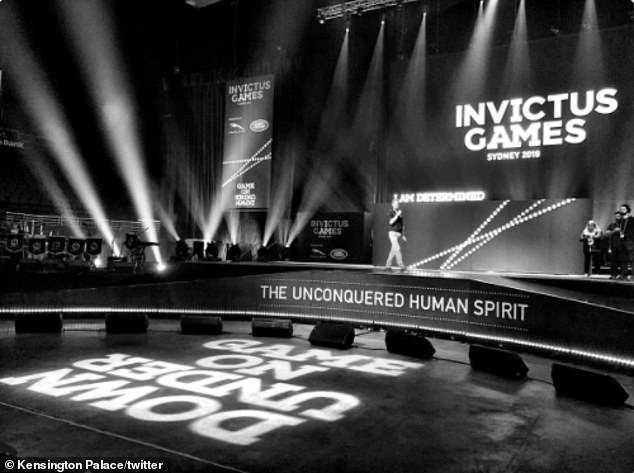 This photograph was posted on the Kensington Royal’s social media accounts, and was credited to the Duchess of Sussex

She was even hands on with the Kensington Royal account, which she and Harry used to share with the Cambridges.

She snapped a photograph of her husband that appeared on the Kensington Royal feed during the royal tour last year.