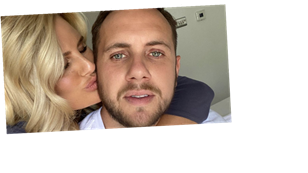 Danielle Armstrong and her fiancé Tom Edney moved into their new Essex home back in June just days after she gave birth to daughter Orla Mae.

Now the couple have slowly settled into the property TOWIE star Danielle has been sharing glimpses inside, and outside.

The 32 year old, who welcomed her first child on 26 May, has already shared a brief look at the layout inside including a grand staircase, bathroom and her bedroom, and has now revealed the stunning garden and kitchen.

Filming her other half working out shirtless in the garden, Danielle giggled away as she shared a look at the garden set-up.

Just outside the patio doors is a bricked terrace area, which is separated from the main grass by a big bush. As well as their garden furniture, at the end of their manicured lawn is a brand new summer house.

And the star recently appeared in her pal Ferne McCann’s show, First Time Mum, showing fans another glimpse at the garden.

Sitting with her baby daughter and Ferne outdoors on a sunny day, Danielle and Ferne chat away, that is, however, before she has an accident all over mum Danielle’s new dress!

However, when all eyes weren’t on the little one, and Ferne’s daughter Sunday, the garden was the next centre of attention.

The space is simply stunning and boasts stylish garden furniture in a slate grey shade.

The garden is expansive too, and features gorgeous flowers and plants which make their way around the sides.

Another angle shows the large white house Danielle and her fiancé Tom Edney live in, with a wooden archway in shot marking the entrance to the garden.

Danielle also took to Instagram to reveal Tom had renovated the outside of the house with his company, Teag Construction. Showing off the impressive transformation on Instagram, Tom unveiled the modern outdoor view of the property, writing: "One of our most recent projects which was completed in June, this was actually a house I renovated for my family home, very difficult client (The Mrs)".

Speaking about hosting a party for the first time since becoming a new mum Danielle said she was absolutely "shattered" after having both sets of parents round, and each of their sisters and their partners over.

"Oh my god, I am exhausted. It's obviously the first time I've had to host and like put food on and it's been ages since I've done anything and I am absolutely shattered!"

Giggling away as she pretended to collapse on the bed, Danielle continued: "I used to be a great host before having Orla! A couple of times I just wanted to sneak upstairs and go to sleep."

Danielle and Tom have swapped their previous home, which had a stunning walk-in closet and spacious back garden, for their new digs.

So far the reality TV star has been preoccupied with caring for her daughter but has given a peek inside her new bedroom.

Keeping with a similar colour scheme as before, the master suite is all white, with a white chest of drawers and bedside table.

By the bed is an unusual lamp without a shade sits on top of the cabinet, instead it's just the metal skeleton frame.

Elsewhere around her new home, Danielle and Tom have opted for a monochrome finish, with accents of black and white up the main staircase.

The hallway is carpeted in cream and there are huge black and glass doors which appear to head towards the main living area.

The mum of one also shared a quick glimpse at her bathroom as she walked up the stairs, which looked airy and bright.

Danielle recently revealed her comfy new sofa which was a shade of blue-grey that was perfect for cuddling her daughter on.

In a video uploaded to her 1.3million followers, she spoke of the house move after a short social media break.

"Hello my lovelies. We are here, chilled."

Turning to fiancé Tom, she continued: "We have had the mentalist weekend haven't we?

"Literally, moved in this weekend. We're currently on our new sofa. Orla loves it," she added, pointing the camera to the newborn, who rested on her dad's chest.

She asked her fans: "Why would we move with a newborn?" before her and Tom both burst into laughter.

Black British activists share their hopes for the future